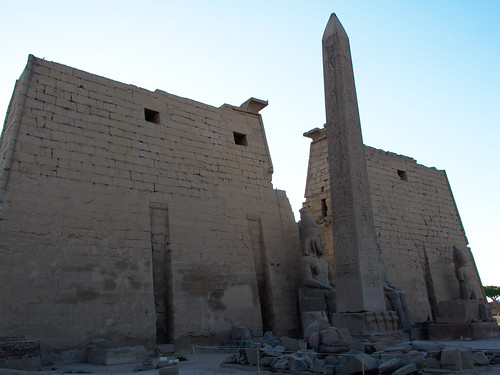 Luxor Temple is one part of a wide ranging and cohesive set of sacred buildings around the ancient city of Thebes. The oldest buildings of the temple that still exist today date to the New Kingdom, but it was almost certainly built on the site of a Middle Kingdom temple (and quite possibly an Old Kingdom temple before that). Once it was joined to the Karnak Temple complex by an Avenue of Sphinxes stretching 2.5km to the north, along which the god Amun processed in his sacred barque on festival days. And in early New Kingdom times before the avenue was built this was a canal, and the god’s barque floated between the temples.

I have many pictures from this temple, more than in this post – the rest are, as always, on flickr: click here for the full set. Also click on any photo to go to it on flickr to see it at a larger size 🙂

We started our visit at the north eastern end of the temple and stood immediately outside the First Pylon (built by Ramesses II) looking at the remaining obelisk and at the head of a large statue that sits just beside the entrance. The missing obelisk of the pair is the one that is in the Place de la Concorde in Paris, having been “gifted” to the French in the 1830s. Medhat spent a while talking to us about the art style of the sculpted head – this is from a monumental statue of Amenhotep III and when you compare it to the colossal statues of Ramesses II that still stand at the gateway of the First Pylon you can see how the Ramesside art style is much cruder than the earlier. This was clearly one of Medhat’s particular themes as we returned to it several times over the rest of the trip! I’m not entirely sure I agree – I do think some of the much later art (Ptolemaic era) can look clumsy, but I’m of the opinion that the Ramesside stuff is not so much crude as projecting a sense of overwhelming power (rather than refined elegance like his father Seti I’s art style or the early Amenhotep III era art). 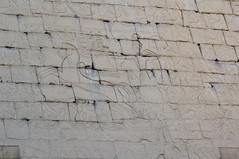 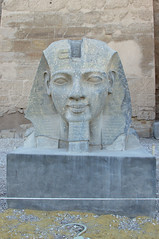 While standing at this point Medhat also discussed how calling the outermost pylon the “First Pylon” is a bit of a misnomer. One thing Pharaohs did to make their mark on the world was to extend existing temples (Ramesses II was particularly keen on doing this), and they did this by adding a courtyard and another pylon on the front of the existing structure. So we as modern people start at the entrance and count inwards, but the sequence of building would be the reverse. This pylon (last or first) is decorated with Ramesses II’s favourite subject – the Battle of Kadesh. It’s not a very good example of these scenes, as it’s pretty eroded – we were to see much better ones later. 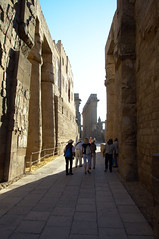 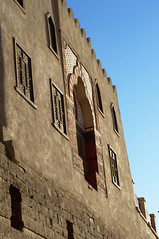 Mosque in the Temple

Moving inside the temple we first took a look at the Christian church and the Islamic mosque that have been built in and on the Temple. The church was built first, around 400AD inside the temple and I think its floor is on the same level as the temple floor. The mosque was built around a thousand years later on top of the church as the site was by then sufficiently covered in sand that this was ground level (and still is on the outside of the temple). The mosque was built there because the holy man (and later saint) Abu-el-Haggag lived in a house on that site and the mosque was built next door to him. His tomb is there and the site is an important monument in its own right (as well as a functioning mosque) and so this part of Luxor Temple is not excavated or restored. Medhat also told us that you can see the tops of the temple pillars inside the mosque – they weren’t removed, they were built around. 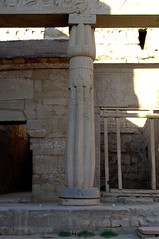 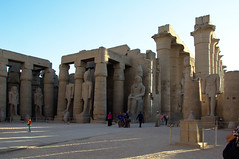 Moving on from mosque into the Great Court of Ramesses II we had a look at the barque stop dating from the reigns of Tutmosis III and Hatshepsut. In Kent Weeks’s guidebook to Luxor and environs (which I’m using to double check my info) he says that this was possibly in a more central position next to the avenue between Luxor & Karnak temples before Ramesses II built his courtyard & pylon. It’s the southernmost of the bark shrines on the avenue & played an important role in the ceremony & procession. Medhat once again used this as an opportunity to contrast the art style of Ramesses II’s columns to that of the earlier ones, which are much more delicate & refined. 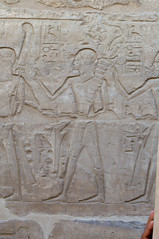 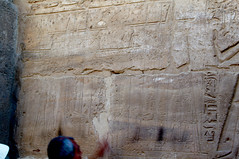 At the back right hand corner of the Great Court (looking at it as you walk in past the mosque) is a relief showing seventeen sons of Ramesses II in procession to the “new” pylon at Luxor Temple. The sons are labelled with names and titles, and are in birth order – so this is particularly interesting as a who’s who of Ramesses II’s family. The other interesting part of this relief is the depiction of the front of Luxor Temple with the flags, obelisks and statues clearly & accurately shown. I like this in particular not just because it’s kinda neat to see a drawing of the place you’re in when you’re in it, but also because of what it shows us about the art style of the Ancient Egyptians. The statues are shown side on, even tho we’ve just see that they face outward from the pylon – the drawing is stylised rather than realistic. Which obviously one knows, but you rarely get a chance to see the actual thing and then the drawing so it’s a useful reminder 🙂 Medhat talked to us for a while about Khaemwaset – the fourth son of Ramesses II – who he said you could think of as the “world’s first archaeologist”. I’d quibble about that – I think “antiquarian” would be a better description. But it’s a reminder both that Egyptian civilisation lasted so long that in the New Kingdom period he could restore millennia-old structures from the past glories of his civilisation. And that they were people too, just like us – here’s a guy who lived & died nearly 3,500 years ago and he’s interested in history just like those of us looking at that relief are. 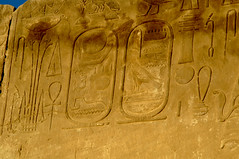 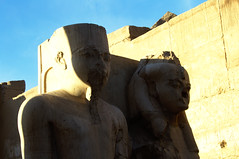 Cartouches of Horemheb (left), Ay(?) and his Wife (right)

In the next two areas we were mainly shown the traces left by the Amarna period and its immediate aftermath. In the colonnade we looked at the back of the second pylon which has, near the top on the left hand side, a cartouche of Horemheb who was the last Pharaoh of the 18th Dynasty. It appears to have been carved over another cartouche, which was probably that of Tutankhamun (who despite restoring the old religion was still removed from history as part of the official “forgetting” of the Amarna period). Near here there are also two pairs of statues – Medhat said they were of Ay and his wife (Ay being Pharaoh after Tutankhamun and before Horemheb). But I’m sure last time we visited we were told this was Tutankhamun, and Kent Weeks’s book labels it as Amenhotep III. So I’m not quite sure which is right (or even if it’s known for sure). When we moved through into the Sun Court we looked at the cartouches carved above the columns – each of which has had the hieroglyphs that mean Amun chiselled off during the Amarna period. Well, almost all of them anyway – there’s one or two that were missed. 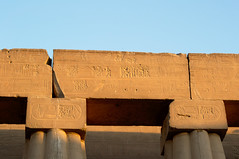 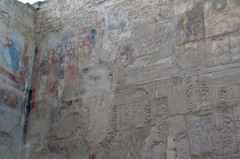 After that we walked through the Hypostyle Hall to the room labelled on the plan as (D) “Roman Sanctuary”. This was once a barque shrine, but in the Roman period it was converted for use in the Imperial cult. The Egyptian religious scenes were plastered over and the new wall surface was painted with Roman religious scenes (including a group of four figures in an alcove who are Diocletian, Maximillian and two junior Caesars who ruled during the Tetrarchy in the 3rd Century AD). So today there’s a bit of a hybrid appearance – some of the plaster has fallen off revealing the Egyptian reliefs, and some of the plaster is still present. 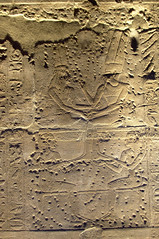 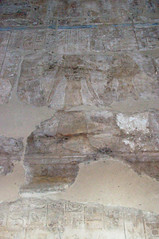 This was where Medhat’s tour of the site ended, but Dylan took us on through to the Birth Room which has reliefs that depict the divine conception and birth of Amenhotep III. Particularly interesting in here (tho sadly my photos aren’t great, it was difficult lighting to photograph in) were a scene of Amenhotep’s pregnant mother (you can just see her bump), a very polite conception scene (the god Amun & the woman sitting together while he holds an ankh symbol to her lips) and the god Khnum making Amenhotep on his potters wheel. 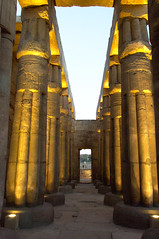 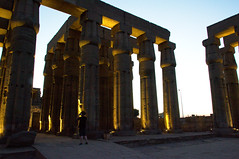 Luxor Temple as the Sun Sets

By this stage the sun was setting (and had been for a while) so we walked back through the temple taking photos because the temple looks particularly good at sunset. 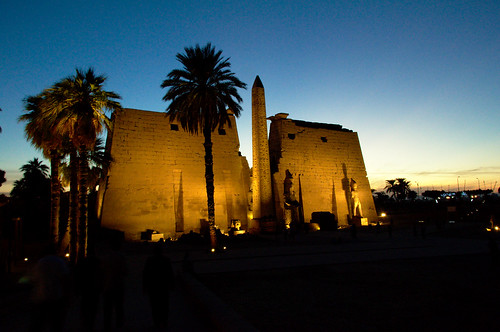