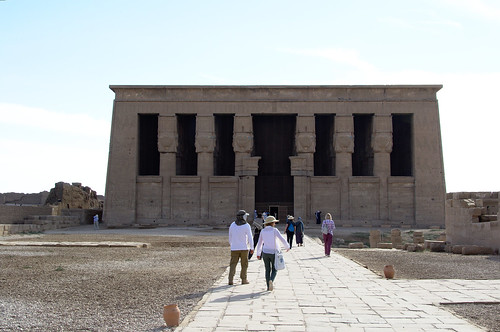 Temple of Hathor at Dendara

We visited Dendara after Abydos as it’s on the way back to Luxor. The temple here is dedicated to Hathor and is much more recent than the two at Abydos – it’s Ptolemaic and Roman era, although built on the site of older temples. One of the well known reliefs on the temple is of Cleopatra VII (ie the famous one) and her son Caesarion. We actually saw more of the surroundings of the temple than the inside – going up on the roof, under the floor and around the outside. My photos from this visit are, as always, up on flickr – click here for the full set, or on any photo to go to its flickr page. 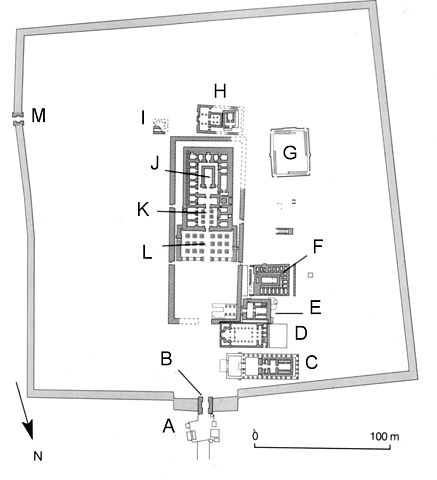 Plan of Dendara Temple Complex
Made by wikipedia user Sinuhe20

We entered the temple complex from the north, going through the Domitian & Trajan gate, and pretty much bypassed the buildings to the right. We first paused at the facade before passing through into the vestibule. My main impression of this space is that there’s a lot of blue – it’s the colour that seems to’ve survived best on the reliefs. The columns are striking as well – not the more usual papyrus shaped tops, instead they have Hathor’s head near the top with the column above her carved to look like a sistrum (or rattle). The ceiling is still intact and in this room it’s decorated with astronomical reliefs – when we visited 5 years ago it was in the process of being cleaned so there was a lot of scaffolding in the way. I’d meant to come back towards the end of the visit and take more photos but ran out of time, sadly. 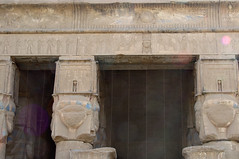 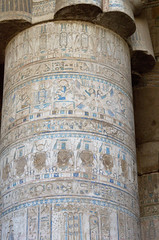 The Facade (left) and Inside the Vestibule (right)

Instead of continuing further into the temple we made our way up to the roof. We went up via the stairs on the right hand side which follow a (square) spiral path up to the roof. They were used by priests during festivals and the walls are carved with priests walking in procession. When lit by flickering torches it must’ve looked out of the corner of your eye as if they were walking alongside you. Once up on the roof we walked through a Ptolemaic era kiosk with blank cartouches – the turnover of Pharaohs during this period was at times brisk enough that the artists never quite got to the point of writing in the name. 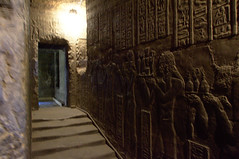 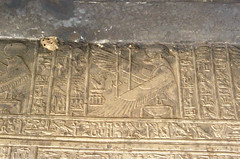 Stairs to the Roof (left), Relief in the Osiris Rooms

The roof isn’t flat, even on the bits that don’t have structures on – it depends on the height of the room underneath. We stopped next to the central section and Medhat pointed out just how big the stones here are, and the difficulty the Egyptians must’ve had in transporting them and raising them with the technology they had available. At the front of the roof there’s a couple of rooms dedicated to Osiris – Hathor being associated with the Osiris myths (she nurses Horus), and also because Dendara is another place that Osiris is supposed to be buried. The first of those rooms is where the famous zodiac ceiling comes from (now in the Louvre) – it’s been replaced by a plaster replica, painted black to match the rest of the ceiling. Which is a shame, as it given it’s a replica anyway it would’ve been interesting to see it painted in colours like the original once was – of course the state of knowledge when the original was removed possibly means that wasn’t an option. The inner room is decorated with scenes from the legend of Horus’s conception and birth – which occurs after his father Osiris’s death. His mother Isis had succeeded in resurrecting Osiris for long enough to impregnate her, and this is depicted in the reliefs as a mummy lying on a bed with an erect penis. The falcon hovering over this is Isis being impregnated. I seem, inexplicably, to have no photos of these – instead I paid more attention to other motifs in those rooms. 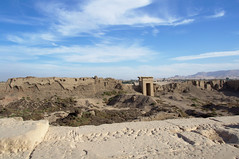 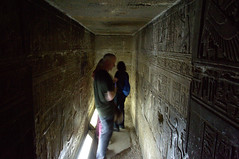 After looking at the view from the roof we headed back down the other stairs to the main part of the temple. We then had the opportunity to visit one of the crypts underneath the temple. These were storage spaces for the temple valuables, and the entrances were hidden. As they were functional and secret spaces I wasn’t really expecting them to be decorated – but of course that’s not the way the ancient Egyptians thought! The one we looked in was covered in very fine decoration – it’s quite narrow so I sadly didn’t get any good photos of the sweep of the scenes. 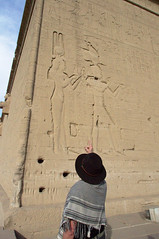 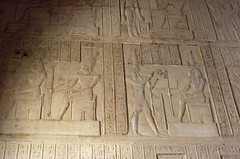 Relief of Cleopatra (left), Reliefs in Temple of Isis (right)

Next we headed around the outside of the temple to look at the Cleopatra relief on the back wall, and while we were there one of the guardians opened up the Temple of Isis so we could have a look inside. This small building dates from the Roman period, still decorated with Egyptian motifs (as their religion last for a few hundred years after they became part of the Roman Empire) in the clumsy style I associate with Ptolemaic and/or Roman reliefs. We then walked back towards the front of the temple looking at the other reliefs on the outside of the western wall and at the sacred lake. The “lake” is completely dry now, and Dylan told me that even when the temple was in operation it would’ve fluctuated a lot with the seasons. Just before the annual flood it might’ve been no more than a sacred puddle. 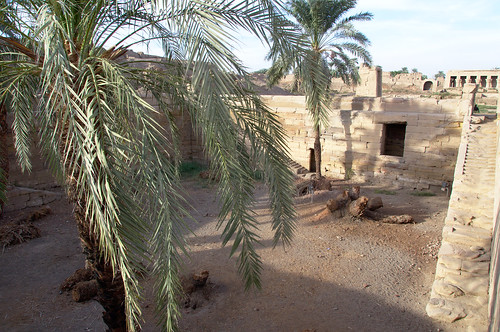 A slightly odd visit, as I said at the beginning we saw more of the outside than the inside. Perhaps another time we’ll look around more at the interior reliefs.