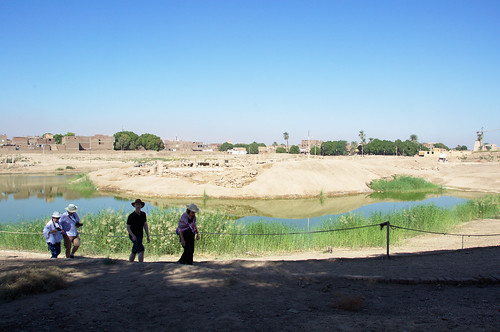 Sacred Lake at the Temple of Mut, with Karnak in the background

After visiting the main part of the Karnak Temple complex we returned to the coach briefly to go to the Temple of Mut. This is actually a part of the Karnak complex but it’s not possible to walk between the two sites (and it’s a different ticket). Hence the short coach ride. We were dropped off on the Avenue of Sphinxes that leads towards Luxor Temple and walked to the Temple of Mut. The goddess to whom this temple is dedicated was the consort of Amun and so one of the main three deities of the Karnak Temple complex. My photos are on flickr, click here for the full set or on any photo for the larger version of it. 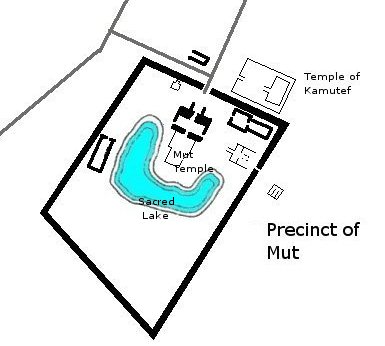 Plan of the Temple of Mut
Made by wikipedia user Markh

This temple has only recently been opened to the public, and although there has been some restoration there’s not very much of the buildings standing. The effect is of a series of courtyards surrounded by low walls, with fragments of statuary and masonry set out in rows (and some of them under an awning to protect the colour from fading. Many of the statue pieces are from statues of Sekhmet as this temple is one of the places where large numbers of Sekhmet statues come from. Chances are if you’ve seen any Egyptian stuff in a museum then you’ve seen at least one Sekhmet statue that comes from either the Temple of Mut or Amenhotep III’s Mortuary Temple. Even Ipswich Museum has one! 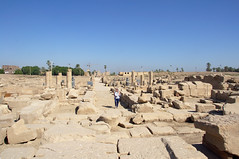 Medhat showed us first to what remains of the Mammisi. The reliefs in this area (as is usual) are of the Pharaoh’s divine conception, birth and early childhood. Those that are left include a very clear circumcision scene, and the base of another polite conception scene like the one we saw in Luxor Temple. We then walked through the rest of the temple, pausing to look at the Sekhmet fragments. There were also two colossal statues that had been restored to something of their former glory. One Sekhmet and one of a Pharaoh. 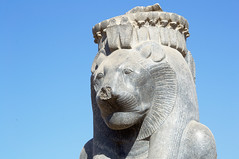 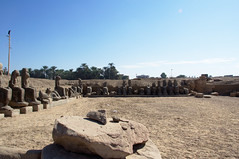 Next we looked at some of the fragments of stone that were under the awning at the back of the temple before walking round the sacred lake. The path took us past another temple building on the west of the site. This was built by Ramesses III and as with the rest of the site not much survives – we looked at some of the reliefs on the western side as we walked past. The sacred lake is an unusual shape – a crescent rather than a rectangle. The path that has been created for tourists to walk round has a seat under some trees on the south eastern end of it – a pleasant spot to sit for a while after our morning walking round Karnak 🙂 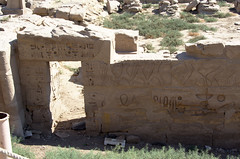 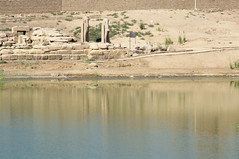 Ramesses III Temple, close by (left) and across the Sacred Lake (right)

After leaving the site proper we had a bit of a look around the various sections of the Avenue of the Sphinxes that are nearby. Directly north of the Temple of Mut is a section of avenue that leads to the main Karnak site – we walked up there nearly to the end and looked at the Tenth Pylon at Karnak from the outside, having seen it from the inside earlier on in the morning. 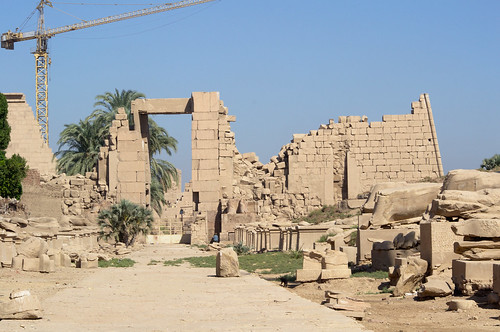