I must confess, I’ve been dreading writing about the various tombs we visited while in Egypt. My memories of the New Kingdom tombs blur together much more than my memories of the various temples and pyramids. And we got less of a guided tour of any of them – sometimes Medhat pointed out some interesting features, sometimes I went through the tomb with someone who knew what they were looking at, but mostly I was looking at the spectacular art as a broad sweep rather than picking up on interesting details. So I’m grouping them into three posts main posts – non-Royal, Kings and Queens – and discussing them in brief and en masse. This post will cover the tombs of the Nobles that we visited on the West Bank of Thebes (the other non-Royal tombs we visited will be talked about along with the site to which they’re attached). 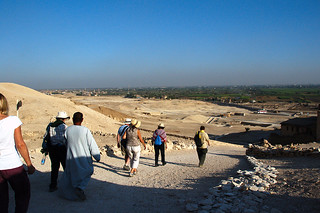 View from the Tombs

Rekhmire’s tomb is very simple in design – it is T shaped, you enter in the middle of the crossbar looking down a long corridor with a corridor to each side. My main recollection of the scenes in here are those on the main corridor that showed not just the funeral itself but also the making of the funerary goods. This included carving large statues and smelting metal. There was also a scene of Rekhmire in his role as Vizier receiving tribute from foreigners on behalf of the Pharaoh – the tribute included a very fine looking giraffe with a monkey climbing up its neck.

Our next tomb here was the tomb of Sennefer who was Mayor of Thebes and Overseer of the Garden of Amun during Amenhotep II’s reign. It’s a very different shape to that of Rekhmire’s – you go down a staircase and then there are two small chambers one after the other – so small that we had to go in in batches rather than all at once. There’s glass up over the wall decoration which obscures it a bit, which is a shame but I assume it stops it being damaged by tourists. The thing that really stuck in my head from this tomb was the ceiling – one of the chambers has abstract patterns plus some text, and the other one is decorated with vines heavy with grapes.

We came to Userhat and Khaemhat’s tombs as a pair, but actually they aren’t really related they’re just close together. Userhat also lived in Amenhotep II’s reign and was the Scribe Who Counts Bread in Upper and Lower Egypt (which I think is an awesome title, and as Kent Weeks points out in his Luxor guidebook it really gives a flavour of the micro-managed bureaucracy of the New Kingdom). The decoration in here wasn’t in as good nick as the decoration in the first two tombs. The scene I particularly paid attention to here was one of barbering – Dylan pointed out that this was new recruits to the army lining up to get their short back & sides (shaved heads, in actuality) now they were soldiers! Khaemhat’s tomb was from a slightly later date than the first three in this set – he was the Overseer of the Granaries of Uppar and Lower Egypt, and Royal Scribe, during Amenhotep III’s reign (and early in Akhenaten’s reign). His tomb has lost most of its paint – due in large part to people living in there, then early cleaning attempts using soap & a scrubbing brush! However unlike the first three we visited it hadn’t been painted directly onto the walls, the scenes had first been carved in relief. I remember least about this tomb, I think with nothing standing out to mention.

The last of this afternoon’s tombs was that of Ramose, which is very fine. He was a prominent nobleman during the end of Amenhotep III’s reign and the start of Akhenaten’s, holding many important titles. The main chamber we saw in this tomb (there is more that we couldn’t get access to) was pretty large – startlingly so in comparison to the other tombs. As with Khaemhat’s tomb much of the decoration in here is not just painted but also carved – and is in much better condition than Khaemhat’s tomb was. There were two particularly memorable sections in this tomb for me. The first of these was one of the relief sections which depicts Ramose’s funeral feast. The carving here is very beautiful and intricate, some of the highest quality carving we saw in the trip. It presumably was intended to be painted, but wasn’t finished – the only colour added is to outline the eyes which gives the figures a very striking look. The other memorable scene was on the opposite wall and is in the “new style” of Akhenaten’s reign – it dates from a point when Akhenaten is changing the art style and religion but is still using his original name of Amenhotep IV. A little snapshot of a very specific moment in time.

The following day was another day spent on the West Bank and amongst many other things (which I’ll talk about in separate posts) we visited the tombs of Roy, Shuroy and Amenemopet. These three are of a slightly later period than the first five we visited – dating to the 19th Dynasty rather than the 18th. Roy and Shuroy’s tombs were both pretty small, certainly far too small for us all to go in at once. J and I were in separate groups and I think he did the two tombs in a better order – Shuroy first then Roy. The decoration in Shuroy’s tomb is much less well done and sadly hasn’t particularly stuck in my mind at all. Roy’s tomb decoration was better executed and even tho there has been a lot of damage there is still a lot to see. The bit that I particularly noticed in there was the Weighing of the Heart scene, which had two hearts on one side of the scale balancing two Ma’ats on the other – rather than the more usual one of each. This was to represent both Roy and his wife, who were both buried there.

The last of the set we visited on this day was the tomb of Amenemopet, which was only recently opened to the public. The guidebook I’m getting my historical details from doesn’t talk about this one, so I’m reliant entirely on my notes here! As I remember it there was much less decoration present in this tomb, and what was notable were the statues and the sarcophagus. The tomb itself was T-shaped and there were large ruined statues of Amenemopet and his wife at each corridor end. The damage to them was caused by flooding which dissolved away some of the limestone. The sarcophagus was sat in the middle of the main corridor, which seemed a strange place. In fact it had been in another chamber further in (not open to the public) and the original discoverer of the tomb had started to have it dragged out (as a souvenir or for his museum, I guess). However it turned out to be too much hassle to move it, and so it was abandoned in the corridor.