“Reflections on the Dendara Zodiac: Addressing the What, When and Why” Rosalind Park (EEG Meeting Talk)

On Sunday Rosalind Park talked to the Essex Egyptology Group about the Dendara Zodiac ceiling, and astrology in Ancient Egypt. The Dendara Zodiac was originally in one of the chapels on the roof of the Hathor Temple at Dendara. When discovered by Napoleon’s expedition in 1799 it was removed from the temple (with gunpowder!) and brought back to France. It’s now on display in the Louvre (see the picture below that I took when I visited in 2011). And in its place in Dendara is a plaster cast (which has been painted black to mimic the original). It’s a pretty big visitor attraction in the Louvre but it has been largely ignored by Egyptologists. 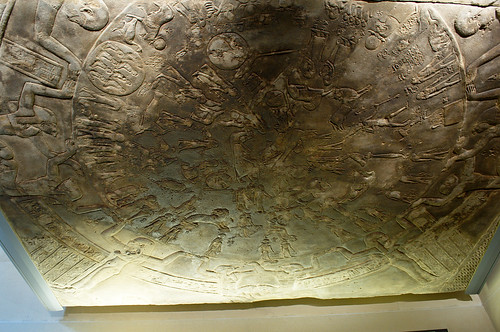 When the ceiling was discovered hieroglyphs hadn’t been deciphered, but some of the astronomical/astrological symbols on the ceiling were recognisable as ones that have been passed down to Western culture via the Greeks (like a crab, which I think you should be able to (just) see in the photo above). A lot of previous work on the Zodiac has interpreted it as a purely astronomical depiction of the heavens, without much serious consideration. The “definitive” book on the astronomy of the Ancient Egyptians published in the 1960s has a lot of oddities in the description & identification of the symbols on the Zodiac. For instance it identifies one male figure with the planet we now call Venus, but on other astronomical scenes the authors identify the same figure as the planet we call Mercury. Park’s own research shows that the whole thing makes more sense if this figure is indeed Mercury as he is elsewhere. This rather casts into doubt the authors’ conclusions about what the scenes mean!

Parks believes that it’s a “fear of astrology” that has hindered the study of the Dendara Zodiac. Academic archaeologists & historians want to distance themselves from any accusations of believing in that sort of mysticism (I imagine in large part because Egyptology does attract a lot of cranks – while writing this post I looked for line drawings of the Dendara Zodiac on the internet and I ran into more than one site explaining earnestly how this all proves that aliens built the pyramids!?). But it’s important to remember than in antiquity (and even closer to the modern day) there wasn’t such a hard line dividing the science of astronomy from the mysticism of astrology. And it’s also important to think about objects from the perspective of the culture that created the object if you want to understand what the object meant and what its original purpose might’ve been.

One of the striking features of the Zodiac that one notices immediately is that it doesn’t fit the standard rectangular grid that “all” Egyptian art is based upon. If you’re expecting squares & straight lines of figures in rows it looks like a bit of a mess. Parks proposes an alternate canon for art in Egypt based on circles, of which the Dendara Zodiac is an example. You can draw an evenly spaced series of concentric rings from the centre outward that contain the figures (equivalent to registers on a rectangular wall painting), and these can be divided into evenly spaced segments with radial lines from the centre. Once you superimpose this sort of grid on the Dendara Zodiac it is clear that it is an ordered design. Parks next showed us a horoscope from 16th Century CE Europe, with the same circular grid drawn on it – and it was strikingly similar to the Dendara Zodiac. This is because the toolkit of astrologers has not actually changed much since Hellenistic times, even though the details have (like what the planets are called and what the constellations are).

After our coffee & cake break there was a brief interlude about astronomy and how it relates to astrology, presented by Park’s husband Gordon Falconer. He started by showing us a star map and pointing out that if it only has stars on it then it is accurate over multiple days (at a specific time of day and place). However as soon as you put on the positions of the planets and moon it is tied to one specific date as well. This is important for Park’s research on the Dendara Zodiac as it is how she has been able to date it. Falconer’s next point was that stars and planets are real, whereas constellations* are imagined. We create these patterns and there are many different ways the dots can be joined up – which he illustrated by comparing “our” (Greek) constellations with those of a Tang Dynasty China star map. Again this is important for Park’s research as it makes it much harder for her to figure out which Egyptian constellations match up with which stars, it’s not just a case of the names having changed.

*Technically the term is “asterism” because the word “constellation” has a different definition within the field of astronomy. But probably no-one outside professional astronomers uses asterism.

Falconer then moved on to tell us about some other features of the star map that can be used to help date and geographically locate horoscopes. One of these are the circumpolar stars. These are the stars that don’t rise and set, whatever time of night you look they are there (and during the day too, just you can’t see them because of the sun). Which stars are circumpolar and how many there are of them depends on your latitude and on the date. If you are near the pole, more stars are always visible, if you are near the equator fewer are. Which stars these are changes over the millennia – the Earth does not just rotate around its axis it also wobbles a bit (like a spinning top does). This is called precession of the Earth’s axis, and it has a period of 25,800 years. One effect of this is that whilst Polaris is directly at the North Pole now, it wasn’t before our time and won’t be after (until 25,800 years have gone by). If you look at star or constellation maps from even as recently as 500 years ago (Falconer illustrated this with one drawn by Dürer) then Polaris is not on the pole. I knew this before, but I didn’t realise you could see the effect within such recent historical time!

Another concept that can be used for dating is the Vernal Equinox. This is the point when the ecliptic crosses the celestial equator. The ecliptic is the apparent path of the sun (at noon?) on the celestial sphere over a year, the celestial equator is the line you get if you mirror the earth’s equator on the celestial sphere. The celestial sphere itself is an old idea that the stars (and planets and sun) are in effect stuck on the inside of a massive globe around the earth. It’s (obviously) been shown to be wrong, but it’s still a useful concept in astronomy as it lets you give stars co-ordinates (and it’s still used in astrology for similar purposes). The Vernal Equinox changes over time, and this changes which constellation of the zodiac it occurs in. About 3,500 years ago the Vernal Equinox was in Taurus, 2,000 years ago it was in Aries and now it is in Pisces – and nearly in Aquarius, hence the Age of Aquarius stuff.

The rest of the talk was Park explaining some of the work she has done to identify the date and time of the Dendara Zodiac. To do this she had to figure out what the various constellations were, and also which symbols were being used to represent which planets (and the moon & sun). She talked about a few examples, including one that is not only a representation of a constellation but also a piece of political satire on the part of the horoscope creator. One of the constellations is a lion, standing on an altar – in our constellation schema those stars are part of Centaurus. This lion is probably the Lion of Judah (and she showed us representations of the Lion of Judah from other sources that look similar to the one on the Dendara Zodiac). It looks like it’s turning round and sticking its tongue out at the constellation behind it – a beast with a pot-belly, a scorpion tail, canine legs wearing one of the royal crowns of Egypt. Park has identified this as Ptolemy VIII, who was a thoroughly unpleasant piece of work even for a Ptolemy – for instance he murdered his 12 year old son and sent the dismembered bits to the boy’s mother as a “birthday present” for her! Notably he was also anti-intellectual (including disliking astronomers/astrologers) and anti-Semitic (in part because the Jewish community was on the side of his wife). And so showing the Lion of Judah on a horoscope taunting Ptolemy VIII the beast would’ve been a topical reference to (relatively) recent history.

As a result of her detailed study of the Dendara Zodiac Park has come to the conclusion that it was originally made for the date of the conception of Cleopatra & Caesar’s son Caesarion. This original design missed off the Horus planets (which I think she said were the ones that are associated with masculinity in Egyptian astrology) and also misses off constellations associated with dangerous creatures (like the crocodile). I think Park said this was for two reasons – firstly it would be protective of the subject of the horoscope (Caesarion), and secondly the Hathor temple is generally associated with feminine attributes (conception, birth, motherhood and so on) so it was appropriate in that context. Later, the horoscope was usurped and altered by Caesar Augustus – he had the Horus planets added which adjusts the date to a significant one in his life.

Tags:astrologyastronomyegyptFalconer, GordonPark, RosalindTalk
previousEgypt Holiday 2014: el Tod
next“At the Gate of the Ancestors: Saint Cults and the Politics of the Past at Abydos” Janet Richards (Sackler Lecture at the British Museum)