“Howard Carter: An Alternative View of the Man Through His Art” Lee Young (EEG Meeting Talk)

At the beginning of this month Lee Young came to the Essex Egyptology Group to talk about Howard Carter as an artist (rather than as an archaeologist). She is an independent researcher associated with the Griffith Institute in Oxford where the bulk of Carter’s notes and archives are kept. Although she was talking to us today about Carter she said that her real research interest is in the female artists whose works are represented in the Griffith Institute collections.

She began by sketching us a quick verbal picture of Howard Carter’s character: he was contrary, stubborn, opinionated and sometimes rude. He was short-tempered and didn’t suffer fools gladly. He also had a chip on his shoulder about his humble origins – going so far in later years as to re-write his background into something that he felt was more “suitable”. But to offset this picture of a proud man Young pointed out that Carter’s work recording the Egyptian reliefs required a great degree of artistic humility as he had to bury his own skill & artistic style in the service of accurately recording the ancient artists’ skills.

Howard Carter was born on 9th May 1874 in London, as the youngest son of a large family. His parents, Samuel Carter and Martha Joyce Carter were both originally from Swaffham in Norfolk. His grandfather (Carter) was a gamekeeper there, and parts of the family still lived there. Samuel Carter had moved to London to work as an artist, and the whole family were very artistic. Samuel Carter painted in a high Victorian style and his work was well regarded at the time. He mostly painted animal portraits for the gentry but he also worked as the principal animal illustrator for the London Illustrated News for 20 years.

Howard was a sickly child, and as a result of this was poorly educated. What schooling he did get was in a day school rather than a public school, which caused friction in his dealings with the Victorian elite in later life (and contributed to his embarrassment at his origins). As an older child he was sent to live in Norfolk with some of his aunts and he learnt to love nature there, spending a lot of time painting the wildlife. He was particularly interested in birds (and I think Young also said insects). However he wasn’t able to follow up on this interest, instead returning to London to work in the family business painting pets. Apparently despite generally liking animals he loathed lapdogs, which were often the subjects he was hired to paint.

In 1890 the Egypt Exploration Fund (precursor of the Egypt Exploration Society) were setting up a project to archaeologically survey the monuments in Egypt because there were fears that they would also soon be so damaged there’d be nothing left. The first season a team headed by Percy Newberry went to Beni Hassan to begin work there, and initially it was hoped they’d finish that site in a season and move on the following year. However the work took much longer that anticipated and it was decided to spend the following year there as well, and take along another artist. Howard Carter got the job – through the recommendation of Lord Amherst, who Carter had painted pictures for and who had encouraged Carter’s interest in Amherst’s Egyptian collection. Carter was considered particularly suitable for the job as he was not a gentleman – the job was unpaid but expenses were covered and the EEF thought a gentleman might run up larger bills than they wanted to pay!

Before Carter went to Egypt he was given time to study for his new role – he had a pass to permit him to draw in the British Museum and he also studied the work of Robert Hay. Hay had recorded several monuments & inscriptions in the early 19th Century, and after studying those records Carter regarded Hay as better than many of Carter’s contemporaries. In 1891, at the age of only 17, Carter travelled to Egypt for the first time. He first stayed in Cairo for a while – visiting the Pyramids of course, and the Museum and also spent a lot of time drawing and painting animals in the zoo. He also met Petrie for the first time in Cairo, and liked him & his attitude.

Once in Beni Hassan Carter was put to work by Percy Newberry on recording the reliefs in the Oryx Nomarch tombs. Young told us that Carter liked the views at Beni Hassan, and the archaeological site, but the accommodation was just “good enough for those who aren’t too fussy”! However Carter didn’t approve of the methods used by Newberry to record the reliefs – the technique he was using involved tracing the reliefs then sending them back to England to be inked in in black by people who’d never seen the originals and weren’t trained artists. The drawings were then reproduced at a much smaller scale for publication and so even those fine details that he had managed to record were lost. At first Carter did as he was told, and impressed Newberry with his diligence and the speed with which he worked. As the work was progressing quickly Carter was also instructed to paint watercolour facsimiles of parts of the scenes. Young showed us several examples of these, including many birds and other animals. The photo below is one I took when the EEG visited the Egypt Exploration Society a couple of years ago – during that visit we saw several of Carter’s drawings that the EES have in their archives. 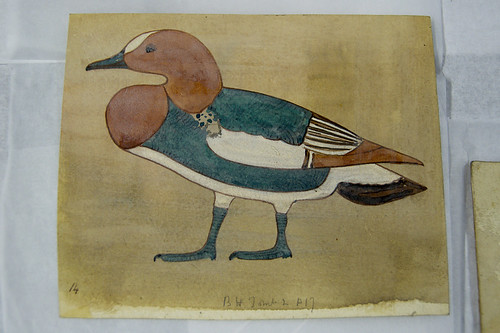 The next site Carter went to was Deir el Bersha, which is near Beni Hassan – one of the scenes at this site is the famous one that shows an extremely large (6.8m tall) statue being moved by a large team of Egyptian workers. While working on recording the reliefs here he was able to exercise more control over the finished product. The figures were no longer blacked in as they had previously been, and Carter managed to arrange for the published drawings to be a larger scale so the fine details were more visible. His paintings and drawings from this site are still very useful to archaeologists today as they show details that no longer exist – the site at Deir el Bersha has suffered a lot of damage over time from rock falls to vandalism.

In the late 19th Century the big goal of Egyptologists was to find Akhenaten’s tomb. When it was found Petrie went to see it, and took Carter with him. Young said that one of the drawings that Carter made at the site was his first published archaeological drawing. After this trip Carter went to Amarna with Petrie to work as his apprentice. He got the job by accident – the original candidate, Marcus Blackden, had been sent home in disgrace and Carter was the available person. Petrie was, famously, initially unimpressed with Carter – too much an artist, too little an archaeologist. But Carter turned out to be more useful than that initial impression.

In 1893 Carter was assigned by the EEF to Deir el Bahri as the principle epigrapher. Young reminded us at this point of how little time had passed – Carter is still only 19 years old. But as principle epigrapher he had a lot more control over how the work was done. He used his artistic abilities to draw the scenes freehand, and was able over the 6 years he was at the site to employ assistants who were also artistic enough to work in the same fashion (including one of his brothers). The EEF eventually published 6 volumes of plates from Carter and his team’s work at Deir el Bahri, to great acclaim, and the standard of work was much better than previous expeditions had produced.

After his time at Deir el Bahri Carter was appointed as the Chief Inspector of Antiquities for Upper Egypt – a prestigious appointment that served to reinforce his liking for archaeology. During these years he was still working as an artist – in particular he did the drawings for Theodore Davis’s publication of Yuya & Tuya’s tomb. Carter was regarded as very efficient and capable in his position as Inspector, but after he was transferred to Lower Egypt he famously fell out with the authorities. Young told us the story briefly, as it’s so well known – some French tourists went on a rampage damaging both monuments and their Egyptian guardians. Carter took the side of the Egyptians, feeling that they were doing their jobs and the tourists were undeniably causing damage. However permitting the guardians to defend themselves was regarded as insulting to French dignity. When Carter refused to apologise he was transferred to a less prestigious post and then subsequently resigned feeling humiliated.

From his resignation in late 1905 to 1909 (when he started work for Lord Carnarvon) Carter lived off his wits and through selling paintings. Young showed us several examples of the sort of work he did. This ranged from landscapes and the major monuments for tourists, through to work destined for archaeological publications. She told us that a lot of the information about Carter during these years comes from his correspondence with Mrs Mars, a wealthy client of his for whom he painted several paintings.

Carter joined Lord Carnarvon’s third season in Egypt, although for some of time initially he was actually working doing drawings for a project of Alan Gardiner’s. This didn’t suit Carter, as he was not fond of Gardiner – Young explained that Carter thought Gardiner had been making insinuations against Carter’s friends. Gardiner’s project was never finished, but he kept the drawings and they are now in the Griffith Institute. Young said that not only are they still a useful reference for modern archaeologists but they also showcase Carter’s maturity and skill as an artist.

In 1922 Carter made the discovery that made him famous – that of Tutankhamun’s tomb. Young said that Carter drew everything during the excavations. His record cards for every object have little sketches of said object, carefully annotated and also beautiful. As well as showing us several of these cards Young also showed us some of the newly colourised versions of Burton’s photos of the excavation – a little tangential but interesting to see!

Young finished her talk by telling us Carter’s own thoughts on the copying of reliefs. In later life he wrote several essays with a view to a possible autobiography. These included his firm opinion that the epigraphy work needed to be done by a proper artist – that this was the only way to not only capture all the detail but also give a proper appreciation of and respect for the skill of the ancient artists. As Young pointed out, it’s not clear that he would approve of modern techniques – which are a return to the tracing of reliefs that he’d so disapproved of when he first went to Egypt.

This was an interesting talk – often one hears about Carter as archaeologist with a footnote that he was an accomplished artist, but here Young showed that you can tell the story of his life with the opposite emphasis with just as much justification.