“Mighty in Waking and Great in Sleeping: the History of Beds in Ancient Egypt” Manon Y. Schutz

Schutz started by talking about the basics of the subject – what is a bed? It’s important to start by thinking about our modern preconceptions of the subject so that one can hopefully avoid jumping to unwarranted conclusions when thinking about Ancient Egyptian beds. She gave a detailed modern definition of a bed, and then looked at how this is not a universal definition. For instance in our culture we think of beds as ubiquitous but you don’t have to go as far afield as Ancient Egypt to see that this isn’t always the case. Even a few centuries ago in European culture beds were high status objects (I was reminded that Shakespeare specified what was to happen to his second-best bed in his will, it was an important object). We also think of beds as private places – for one person or a couple – but in many cultures co-sleeping is common, and even in our own culture small children may co-sleep with their parents.

All the archaeological evidence for beds in Ancient Egypt come from high status contexts – high status burials, or place like Deir el Medina (which was a village for elite craftsmen & their families). Beds were luxury goods, and most people probably slept on the floor or on raised daises built into the floor of the room. There are various different words for bed in Ancient Egyptian literature & Schutz discussed some of these. There were beds called ytjt.t which are only mentioned in funerary contexts. ꜣṯ.t beds were mentioned in everyday contexts during the Old & Middle Kingdom periods, but by the New Kingdom are only seen in the funerary context. In the New Kingdom the name of beds in the everyday context was ꜣṯi.t.

There was also the term krk(r), which originally referred to a specific bed of a foreign king acquired by Tutmosis III in one of his campaigns. This wasn’t an unexpected sort of item to bring back from campaign as tribute or loot – beds were often exchanged as gifts between rulers, which is mentioned in the Amarna letters. Schutz also noted that in this sort of context a bed wasn’t necessarily just a sleeping place, it might also be the equivalent of a throne (and in more recent times this was seen in Ethiopia where the kings sat in state on a bed instead of a chair). Interestingly this same term was later used to refer to cheap beds, which Schutz speculated was to debase the foreign bed – in effect the Egyptians were claiming that the most expensive bed of the foreigners was worth no more than a cheap Egyptian bed.

Another sort of bed common in Deir el Medina was a ḥ’tj, and an example of this is the bed belonging to Merit which is now on display in the Egyptian Museum in Turin (see photo below). Beds like this were mid-range beds, better quality than a krk(r) bed, but not the most expensive available. Schutz used these beds as examples to look at what similarities & differences there are between modern beds & Ancient Egyptian ones. As you can see from the photo the shape of the bed is much the same as a modern bed – a wooden frame with four legs – although the board is a footboard and very few Egyptian beds had headboards, which is the reverse to our own beds. 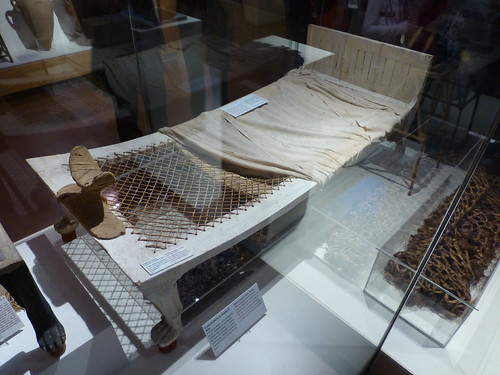 Merit’s bed was found with no mattress, although it’s not clear if that’s the way it would’ve been used in life or just how it was buried. There were linen blankets found near it which may’ve played the role of mattress, and other thicker blankets to be used as coverings during a cold night. Pillows are very rare in Ancient Egypt, instead they appear to’ve used headrests (see the photo) which don’t look terribly comfortable to me. I say “appear to’ve used” because this came up in the questions at the end of the talk and Schutz discussed how in modern African cultures that use headrests they often aren’t used to sleep on at night, instead are to rest on whilst watching herds during the day or something like that. So it’s not entirely clear if Ancient Egyptians actually slept on them.

The textual evidence for beds confirms that they were used for sleeping, but it’s not clear if they were in a bedroom as we would understand it. And in the questions Schutz said that she doesn’t like using the word “bedroom” for any areas of Ancient Egyptian houses because that term brings along all our modern connotations and we don’t even know for sure that Egyptians slept in the rooms we’re referring to as bedrooms. Beds in Ancient Egypt also had other functions, as they do today: sex, birth, illnesses and death. And in Ancient Egypt they were also for social occasions, and for sitting on rather than chairs. In artistic representations thrones & beds show similarities & the terms used to describe them overlap – so as mentioned above an elaborate state bed was not entirely a distinct category of object to an elaborate state throne.

After a break for coffee & cake Schutz talked us through beds from Pre-dynastic to Roman times. Beds first appear in the Pre-dynastic era, but are not found everywhere throughout Egypt until the end of the early Dynastic era. Sometimes people were buried on beds, or next to them – and Schutz said that she thinks the “fetal” burial position common during the period is better thought of as a “sleeping” position. Partly because the Ancient Egyptians would’ve seen sleeping people more often than they’d’ve seen fetuses, and partly because death is associated with sleep throughout Egyptian culture.

The earliest known bed dated from the Naqada II period, but it has since been lost so the oldest bed Schutz showed us a picture of dated from Dynasty 0 (Naqada III). This bed, like most early beds is short – this is because they were for sleeping curled up on rather than stretched out. The legs of the bed are in the form of bovine legs – I’d generally say “bulls’ legs” but Schutz explained that the legs could be either bulls’ or cows’. Bulls are symbolic of fertility and strength which fits with the functions of a bed both as a place for sex & birth, and also as a safe place to sleep. The bull is also important in a funerary context – it’s connected to Seth carrying Osiris in some versions of the Osiris myth, and the Apis Bull who is sometimes shown carrying the deceased. Cows also have protective meanings, as well as meanings in a funerary context – for instance there is the tale of the Heavenly Cow that carries Re to the sky. However it’s worth noting that all the textual evidence for the meanings of bovine legs on beds is much later than the first known bovine legs on beds. So it’s not clear if the stories arise because beds have bovine legs, or if beds have bovine legs because of the stories. 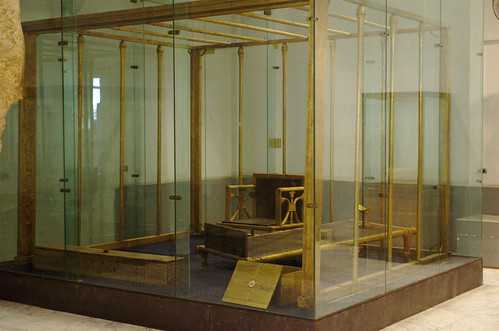 Fewer beds are from from the Old Kingdom. One example is the bed of Queen Hetepheres which was buried with linen, that may’ve been bedcovers. Beds in this period get longer, and bodies buried on them are not in a contracted position. Whilst there are still bovine legged beds there are now also leonine legs on beds. Again this could either be male or female lions there’s often no clear evidence either way. When they are definitely lions they tend to appear in pairs, which is a symbol of the sunrise and therefore a link to rebirth.

In the Middle Kingdom there are several types of beds. One of these types (also found in the Old Kingdom) is a frame without legs, and it’s generally found in a funerary context under either the mummy or the coffins of the deceased. An example belonging to Djehutihotep is covered in protective texts. This type of slatted bed might be quite common, but as they’re not always published in the excavation reports it’s hard to tell how common. There are also beds with legs – there is one example where the body was buried on a bed which is rare in the Middle Kingdom. And there were also beds with pairs of lions as legs (as discussed above) with the coffin placed on top.

In the New Kingdom the coffin was placed on top of a bed as transport to the afterlife. Bovine legged beds came back into fashion, but with a slight difference – in the earlier periods the four legs of the bed mimicked the real legs of a bull (or cow) and consisted of one pair of front legs and one pair of back legs. But in the New Kingdom the four legs were identical. During this period elaborate beds were presented as tribute to kings, and Schutz showed us some examples. Tutankhamun was buried with several beds, including one that was in the sarcophagus under the coffins with short leonine legs & heads.

There is little evidence for beds in the Late Period, other than in reliefs. In the Graeco-Roman Period one sort of bed is generally found under the mummy, and has leonine legs and a slatted top like Middle Kingdom examples. However a key difference is that the tails of the lions are elevated on the Graeco-Roman beds, as a protective symbol. Schutz finished up her history of beds in Ancient Egypt by talking us through an example of a bed from the 2nd Century CE. This was found in the tomb of a pair of siblings, two children of 3-4 years old who were buried in the same coffin. The bed was not “just” a bed – in decorative motifs and in shape it’s very reminiscent of temple architecture & reliefs, and it seems to’ve functioned symbolically as a temple within the tomb.

In conclusion Schutz said that beds were essential to sleep, procreation and death in Ancient Egypt. The various animal motifs (including the legs) are both protective of the sleeper and ensure the rebirth of the deceased in the afterlife.

This was an interesting talk about a subject that one often fails to properly consider – a bed is a bed after all, but Schutz made it clear that there was much more to beds & their uses than is obvious on the surface.