This is the second half of Ramadan Hussein’s talk that he gave to us at the Essex Egyptology Group in February – the first part is here. During this part of the talk Hussein told us about the exciting new discoveries that he & his team have made at Saqqara which have now been announced by the Ministry of Antiquities (see also the Tübingen University announcement). 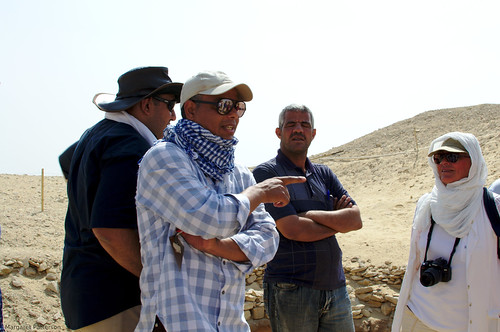 Ramadan Hussein on site at Saqqara in October 2016

Hussein said that they have continued to excavate the area to the south of the three tombs he discussed in the first half of his talk. As a reminder, on top of the main shaft they discovered the remnants of a basic superstructure and then to the south of this was a chapel for offerings. The initial discovery for this further excavation was a small shaft the size of the side shafts of the tombs to the south of the chapel. This had holes around it that were to hold vessels, plus a ramp built up to the shaft. There are similar structures at Old Kingdom mastaba tombs which are for an offering ritual, and so this was what he assumed this structure was – but it turned out to be something much more interesting.

When they excavated the shaft it was full of distinct layers of pottery vessels, that looked like cooking vessels and were stuffed with botanical materials. These botanical materials are mostly cereals and other seeds – but not the useful stuff that you might eat. Instead it’s mostly waste and is similar to the packing material found in KV63 (an embalmers cache found in the Valley of the Kings in 2005 near Tutankhamun’s tomb). Partway down the shaft they discovered a dog burial, which Salima Ikram came to help excavate. This 4-7 year old dog had clearly been left outside before burial as there was not much flesh left, but it was buried with care – a burial rather than a disposal. Further down there was some red & white linen and some large insects (I didn’t quite catch the name, I think he called them cockroaches at one point and Palmetto bugs at another point), which are symbols of the goddess Neith. Hussein said they’re going to investigate the linen further – one piece has a stain of something like resin on it that they plan to analyse, and they can also look at how the cloth was made.

At 10m deep the shaft cuts through the 2nd Dynasty tunnels that extend under Unas’s 5th Dynasty pyramid (this is part of why Khaemwaset had to restore Unas’s pyramid in the New Kingdom period, as it wasn’t structurally sound). Below this level the shaft is full of broken pottery & stones. The stones appear to’ve been part of a building which was then dismantled and used to fill the shaft. And finally at the bottom of the shaft there is a 9m x 5m room. At the east side of the room there is a ledge or raised platform, and in the south east corner there is a storage vessel buried in the floor with walls built around it. There are signs that this was a room that was used – human activity took place here, it wasn’t just for disposal or storage.

Hussein told us that some of the pottery they’ve discovered during this excavation are measuring cups labelled in hieratic and demotic. This is really exciting as the labels are instructions and ingredients for the embalming process – they say things like the name of an oil plus a number. Perhaps saying “use this measure of oil for the Nth time you use it”. There are also residues inside the measurement cups – which means that they will be able to find out what the different named oils actually were. Hussein is currently putting together a team to study these further.

So this shaft appears to be both some sort of work area and where an embalmer disposed of his now sacred tools that he’d finished with. Hussein & his team continued to investigate the area near this shaft, as it seemed plausible that there would be a workshop nearby – perhaps the building that had been dismantled & put down the shaft had once been part of such a thing. Immediately to the south of the shaft they could already see signs of the corner of a wall. When excavated they found a rectangular enclosure divided into two by a ramp running from south to north. In one half they found a mudbrick basin with vessel holes around it, and in the other half there were traces of a matching basin which was much more destroyed. The shape of this workshop looks like Old Kingdom representations of a temporary purification tent. These Old Kingdom structures had to be dismantled & disposed of after use, just like this 26th Dynasty structure seems to’ve been – although it was a longer lasting structure than the very temporary tents.

They also found vessels in situ like those disposed of the shaft, and some of them had a tar residue inside. Tar was the main component of the mummification process during the 26th Dynasty, so this provides further evidence for the idea that this was an embalmer’s workshop. They have also discovered braziers which would’ve been used to heat the tar. And four torches – which is a number mentioned in texts describing various rituals that should take place during mummification.

Continuing further to the south of the workshop Hussein & his team discovered a new large shaft. This is not another tomb like those of the three 26th Dynasty officials that he started his excavations with – instead it is if anything more exciting to an archaeologist. It is absolutely full of burials!

The first burials they discovered were intrusive burials in the walls around the top of the shaft. As Hussein pointed out this implies that this was a place of some significance to the local community – people wanted to be buried near it. At about 9m deep in the shaft it once again breaks through to link to the 2nd Dynasty galleries – it seems they did this on purpose & knew roughly where and how to deep to drop their shaft in order to do this. In fact you can see a first attempt to break through at 8m deep before they realise they’re too high and dig down another meter. Below the level of the 2nd Dynasty galleries are the burial chambers, which he said had been disturbed in antiquity. The chambers are full of debris, which is partly from decaying mummies, and under this there are row upon row of mummies. The mummies are separated from each other by white sand, which is both pragmatic and ritual. The shaft is clearly a communal burial place that has been used over a long period of time.

The people who have been buried here come from various different levels of society. Many are in the large groups in the big burial chambers. Some are in separate chambers on their own or in a small group. Others are in a hallway rather than in a burial chamber proper. And they have varying amounts & types of burial goods including some in coffins. One burial had a set of 365 shabti figures which had clearly been in a now decayed box. One of the burials was clearly of a very high status woman (for this group) as she was in a bead net dress decorated with Nut and the Sons of Horus. Another high status burial had a wooden coffin and an obsidian head plate, but this individual clearly didn’t have the best quality mummification as the body has decayed and all that is left is a shell of tar covered linen.

Hussein and his team have excavated further down the shaft as well – below this first level of burial chambers in the shaft is a layer of silt. The shaft must’ve been open to the air and rain must’ve gotten into the shaft, which will be why so much of the wooden material in the burials above this layer has decayed. At this level there is also the body of a child – but this is not a burial, instead it looks like this was someone who fell in.

Deeper yet there is another chamber with even more mummies in it. As with the burial chambers further up these are also water damaged. They also come from a range of levels of society, and include some individuals with painted masks. Some of the mummies look like they were wedged into the last available space once the chamber was filling up.

Continuing deeper into the shaft at the 21 meter depth there is another burial chamber – this time with 2 mummies in it. These both have an associated inscription, with a lineage for each of them. Hussein explained that they seem to’ve been an uncle/nephew pair. They’ve continued to excavate further into the shaft, and have got as far as 30 meters deep where there are yet more chambers. There’s a large entrance marked with a drawing of a mummy, and this is where they’ll be investigating next season – so far they’ve seen that there are more mummies and shabtis, plus at least one anthropoid coffin with an inscription.

This was a very interesting second half to Hussein’s talk. Clearly what he has unearthed next to the three sarcophagus tombs of officials of the 26th Dynasty is an embalming workshop and burial place for a local community which was used across a significant period of time. Very exciting! There’s so much that can be learnt from the mummies and their burial goods and it’s one of those discoveries that you’re pleased happened now when we’re interested in it rather than back in the days when archaeology was more like treasure hunting.