EEG Trip to the Ashmolean Museum

In November a small group of us from the Essex Egyptology Group visited the Ashmolean Museum in Oxford to be given a tour of the Early Egypt Gallery focusing on the Hierakonpolis Ivories by the curator Liam McNamara. When we got there we were a bit disconcerted to see that that gallery was actually closed for essential maintenance! The Ashmolean is installing a temporary entrance into the gallery so that the revolving door at the main entrance to the museum can be replaced. This actually worked out pretty well for us, as we had that gallery all to ourselves for our tour apart from a few workmen. 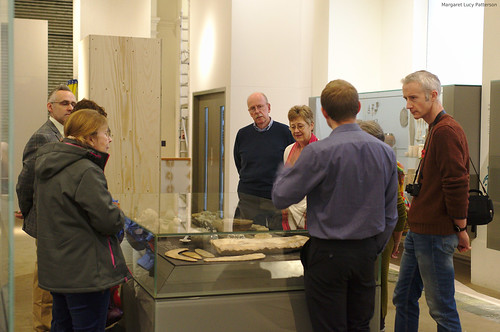 A small gallery of my photos from our tour is on flickr, click here to see them.

McNamara began by introducing the Main Deposit at Hierakonpolis. This was discovered in the late 19th Century by the archaeologists James Quibell and Frederick Green at the site of ancient Nekhen (also called Hierakonpolis). The deposit consisted of a large number of objects from a range of dates which had been deliberately buried. At the time of the excavation the procedure was that any items found would be split between the funders of the excavation (the Ashmolean in this case) and the Egyptians. So the Ashmolean has a large number of the items that were found. The central case in the gallery, that we are standing round in the above photo, has been laid out by McNamara to give a flavour of the the variety of things that were found. They range from knives & maces of various sizes (including “huge”) to small figurines or people and animals. The objects were found organised by type – for instance all the maceheads together, looking something like a heap of potatoes to the original excavators! 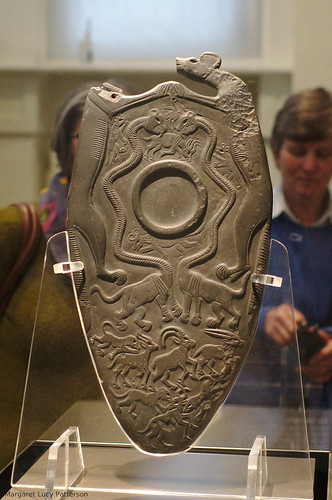 Having set the scene McNamara moved on to tell us a bit about each of the key items in the Ashmolean’s collection. The first of these was the Two Dog Palette (above) which is a similar item to the more famous Narmer Palette which was also discovered near the Main Deposit at Hierkonpolis. It’s a large and elaborately decorated version of a more prosaic item used to grind pigment to be used as eye makeup. This palette, however, was purely ceremonial as there’s no signs of any use of the pigment grinding area (the circle about 2/3 of the way up the palette in the photograph). McNamara thinks it functioned on two levels – it’s large enough to see from a distance, and to see that it’s a well-made piece. But if you’re privileged to be up close you can see the detail and the real splendour of the item. He then talked a bit about the decoration which is a mix of normal and mythical animals (including the serpopards that are prominent on this side of the piece) and has a theme of bringing order to chaos. We were all reminded of the talk that Paul Collins gave in September where this item also featured (my write up of that talk). 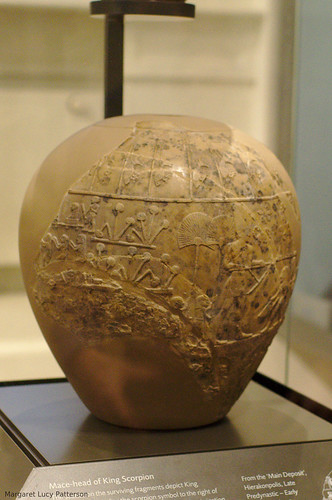 The next pair of items were the Scorpion and Narmer maceheads. The big one (above) is referred to as the Scorpion macehead because it depicts a king identified with that symbol on it. It’s easy to forget how little of the actual item we have, and McNamara is convinced that small pieces of it remain on site at Hierakonpolis in the spoil heaps of the original excavators. The imagery carved on to it is that of kingship. Scorpion is wearing the white crown, and performing an irrigation ritual. The top register consists of rekhyt birds hanging from standards. In some contexts the rekhyt bird is clearly referring to the enemies of the King, in some contexts the subjects of the King – whichever is the case here they are clearly subjugated by the King. I was curious how many of them McNamara thought there were on the original item, and did they match the number of later Nomes (administrative districts) of Egypt but that’s not something that’s been investigated to his knowledge. 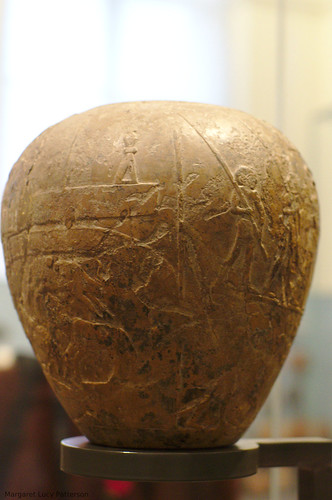 The smaller macehead is the Narmer macehead, who is the king credited with unifying all of Egypt into one country. It’s more complete, but the decoration is much harder to see (above). McNamara said that this (and the Scorpion macehead) also work on the same two levels as the Two Dog Palette. From a distance they are visible & recognisable, and the decoration is seen by the privileged few who can come close to it. He thinks these were unusable – they are many times larger (and heavier) than the small practical maceheads that were also found in the Main Deposit (which showed signs of use). They were perhaps mounted on a pole covered with some of the hollow cylinders found in the Hierakonpolis Ivories. He thinks they would be a symbol of state authority in much the same way as the mace that’s used to open Parliament in our own country. 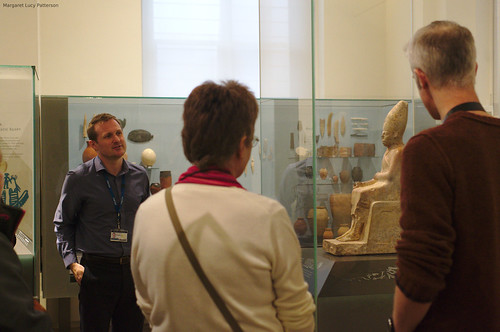 The last of the large pieces that McNamara showed us was a statue of Khasekhemwy (above) the last king of the 2nd Dynasty, which is a very fine piece of work showing him seated & wearing the white crown. The hieroglyphic inscription on the front of the pedestal lists a precise number of thousands of captured and/or slain “rebels of the north”. There’s another near identical statue of Khasekhemwy which is now in the Cairo Museum, and the only difference between the two is in this precise number of rebels. So clearly it’s a fictitious number and really signifies “lots”. Around the edges of the base are enemies carved into it, the carving on this is oddly crude compared to the sculpture. They are shown contorted and in pain, and the point is clearly that the king is sitting on the bodies of his enemies (much as in later art the king is often shown with his feet on the bows representing his enemies). 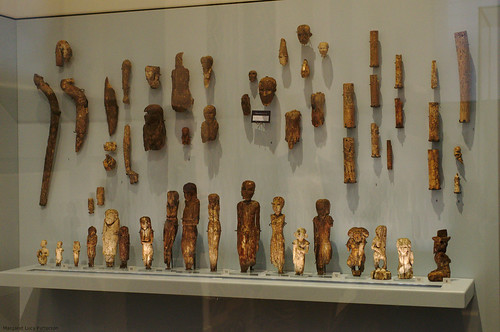 And now we moved on to the Hierakonpolis Ivories (a selection of which are on display, in the case photographed above). This large collection of ivory objects were found in a wet trench, so damp that the original excavators’ notes said it was flaking “like tinned fish”! Under such conditions much was clearly lost before excavation, and during the first attempts to get the objects out of this trench. In the end the excavators solved the problem by pouring molten wax into the trench and when it set they could lift the whole contents of the trench out in several large blocks. These were shipped to the museums (which were getting the results of the excavations) and then the ivory objects could be removed from the wax without the time pressures of an on site excavation. McNamara told us that it’s only in the last 20 or 30 years that they’ve finished unpicking and conserving the pieces – having received them from the excavation over 100 years ago.

The pieces are made of both elephant and hippopotamus ivory, although it’s difficult to tell which object is of which material. The size can help with this – some items are clearly too big to be from a hippo tusk and thus must be made of elephant ivory. There are a variety of types of object. Many are figurines of people in a wide range of sorts and sizes. There are children of various sizes, shown with their fingers in their mouths. There are women with bouffant braided hair, including one particularly fine specimen wrapped in cloak. There are men, mostly naked wearing penis sheaths but some have robes (including one with a fine spotted one). There are also some dwarves. McNamara said he’s picked out the best preserved pieces for the display case but there are many more fragments. Some of those are also in the case including several heads, arms and legs. There are also many non-human pieces. These include staffs, items that look like wands from later Egyptian culture, animal figurines, model boats and hollow cylinders. These last are possibly the remains of the casing for the handle of a large macehead as mentioned above. 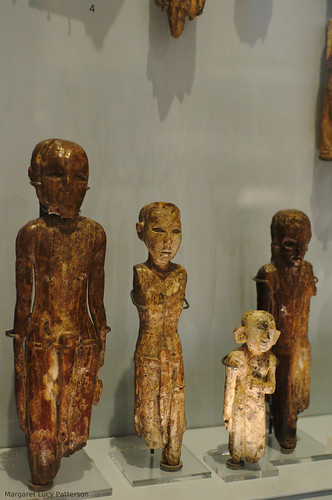 When Quibell and Green finished their excavation they actually wrote it up and published it very quickly, and one of the themes of McNamara’s talk was that this had happened too quickly. Their conclusions had been drawn without enough time for consideration of all the possibilities and nuances, but once something is in the literature it tends to get repeated in future publications until it becomes a “fact” rather than a hypothesis. So McNamara returned a few times to the idea that aspects of the Main Deposit needed re-examination.

One of these aspects is the dating of the Hierakonpolis Ivories – the original publication and subsequent discussion assumes that they are all Early Dynastic but McNamara is not so sure. Given they are ivory, which is organic, one might assume (certainly I did) that they would be datable using techniques like carbon dating but sadly not. The poor condition that the ivories were found in appears to rule that out. Dating was initially tried in the 1980s with no success, and McNamara tried again more recently (as technology has moved on) but still without success. So what you are left with is dating by artistic style, and McNamara said that some of the pieces look much more like Middle Kingdom work than Early Dynastic work. Hannah Pethen was in agreement – she’s recently been looking at wooden Middle Kingdom pieces and she and McNamara discussed one of the arm fragments in the case in particular which is extremely similar to Middle Kingdom examples in how the hand is positioned and how the musculature is depicted.

What would help is to know when and how the ivories were buried. McNamara has gone through the excavation notebooks and records (with intent to publish it soon) and gleaned as much as he can from them but it’s still not clear. The ivories were deliberately buried in an organised fashion, they were found lined up as if they had been buried standing up in rows and then subsequently fallen over. Suggestively they were buried near Middle Kingdom contexts in the site. Of course this can be interpreted multiple ways – they could’ve been initially buried late enough to include some Middle Kingdom pieces, or they could’ve been discovered and then re-interred in the Middle Kingdom.

This was a really interesting tour of the gallery and a great chance to get a good look at these objects. The combination of us being such a small group and having the gallery to ourselves meant that it was more of a conversation with Liam McNamara than a pre-canned talk. It was good of him to take the time out of his day to show us round.