At the beginning of April Reg Clark came to the Essex Egyptology Group to talk to us about his work on tomb security from Prehistoric to Early Dynastic Egypt. While are lots of lurid stories about tomb robbers (and Clark showed us some clips from films) these date to later in Egyptian history, and the measures taken to prevent robbery in earlier periods are not much studied in their own right.

Clark began by talking about why tombs need to be protected. The first obvious answer is that the Egyptians were buried with grave goods, so an elite tomb had treasure in it and was worth breaking into. The second reason that they didn’t want this to happen is that the tomb and the body are necessary for a good afterlife. After death a person’s spirits/souls separate from their body, the ka will remain in the tomb and the ba can come and go. However both must reunite with the body to form an akh (the transfigured form of the deceased who has entered the afterlife). So if tomb robbers enter the tomb and destroy the body then the deceased will not enter the afterlife.

The structure of the main part of Clark’s talk was a chronological discussion of the development of tomb architecture over time in royal and elite graves, looking particularly at what features were intended to frustrate robbers. He gave many examples during each period of history before summing up the developments of that period. I know I haven’t noted down the details of every single one, and it’s quite difficult to write up such a talk without it turning into a laundry list of names and places, so instead I shall try and give a flavour of the examples he talked about.

The earliest deliberate burials in the Nile valley date to 17000 BCE, but his first real examples were from Gebel Sahaba and dated to the Neolithic (12000-10000 BCE). These were shallow pits, covered by stones to protect them from animals and erosion. By the Badarian Period around 5000 BCE graves had become a bit more complex – the back filled pits were now covered by an overlying mound which offered some protection and a focus for offerings. And there is evidence of tomb robbery during this period too – perhaps the tombs were easier to find because the mounds made them visible, or perhaps the robbers were the people involved in the burial.

During the 4th Millennium BCE (the Predynastic Period) tombs developed wooden and then mudbrick superstructures culminating in the mastaba form we recognise from the Early Dynastic Period. Royal graves of the Naqada I Period (3900-3400 BCE) had wooden roofs. In the Naqada II Period (3650-3300 BCE) the tombs were also lined with mudbricks. This was partly to stabilise the pits, but these features also made it hard for robbers to tunnel into the tomb. At Hierakonpolis Tomb 23 had no evidence of a roof but there is evidence for a wooden funerary enclosure and a superstructure which at some point was burnt down. The design of the later Tomb 100 (also called the Painted Tomb) appears to be a response to this destruction – the decorated parts of the tomb are also underground where they are safer. By the Naqada III Period Tomb UJ at Abydos (the tomb thought to be that of King Scorpion) had taken this trend further with more of the tomb structures underground. This tomb was modelled on a small palace and mudbrick lined with a roof below the level of the ground. This strong construction may well’ve been for security reasons.

Elite tombs of the same period in el Kab, Lower Nubia and Hierakonpolis also show development of security features. Some use stone slabs as the roof pit – part of the developing technique of using stone – and some have side chambers that are close off with stone. Tomb 2 in the HK6 cemetery at Hierakonpolis represents the cutting edge of elite tomb security in the Naqada III era. It has a burial pit with a step around the rim to hold a stone lid which would be hard to lever out. The entrance to the side chamber was intended to be covered with a limestone portcullis, and it would’ve been plastered to further hide it.

Clark now moved on to the Early Dynastic Period, talking first about Dynasty 0 and early Dynasty 1 burials. The key points he wanted to draw out here were that the tomb lining was reinforced, as was the roof. And the superstructure of the tomb was useful to protect the tomb from tunnelling robbers both from above and from the side. For instance the tomb of Aha (an early king of Dynasty 1) had 2 metre thick walls, and the evidence is that the roof was much bigger than the structure underneath and it was then covered with a large sand mound. The tombs of his successors had two mounds – one on top of the roof but below the level of the desert floor and then a visible on over the top of this. Clark told us that Günter Dreyer gave symbolic explanations for this sort of structure, but that to him it was also clearly a security measure. In particular a large sand mound will collapse as it is tunnelled into so this forces any robbers to start digging fairly far away from the tomb which makes it more difficult to successfully tunnel into the chambers. The private tombs for this period were built at Saqqara (on limestone, for the high nobility) and at Helwan (on softer ground, for lesser persons). They also have buried roofs that are lower than the level of the ground with mounds on top, and reinforced walls. None of this stopped the tombs being robbed in antiquity.

The key development of the second half of Dynasty 1 was the use of staircases to access the tomb which meant that the tomb could be finished and roofed before the person was ready to occupy it. But this staircase was also easier for robbers to attack – for instance the tomb of Qa’a (the last king of Dynasty 1) had a staircase that was subsequently blocked with a portcullis but once the robbers had access to the stairs all they had to do was tunnel round the portcullis once they got there. Elite tombs of the period copied the royal ones, with staircases blocked with portcullises. Some were completely under ground with no superstructure giving away the entrance. In softer ground the pits were lined with stone to protect them from tunnelling. They also varied the substructure between tombs so that robbers couldn’t tunnel to the same area each time and always reach the burial chamber.

After a break for coffee & cake Clark moved on to discuss the tombs of the 2nd Dynasty. The first king of the Dynasty moved the royal cemetery from Abydos to Saqqara and changed the design of his tomb. Instead of a pit with chambers much like a palace the substructure of his tomb consisted of a lot of tunnels blocked with limestone portcullises. It was built by tunnelling underground so the whole layout was not seen during construction. This new design and construction meant that the roof was of unlimited thickness (as it was solid rock above the tunnels not a man-made structure). Later kings moved back to Abydos and the old design, but the last king of the Dynasty (Khasekhemwy) used elements from both designs for his tomb at Abydos.

The elite tombs of this period had substructures of varying complexity and varying methods of closure. They made use of limestone strata to tunnel into in the same way that the new design of royal tombs did giving them the protection of stone above the substructure. As with the kings they also had mastabas as superstructures for protecting the staircase. Nonetheless robbers tunnels still always go to the right place in the tomb – Clark told us he’s done a survey and 85% are robbed in this fashion. This implies that it is the relatives or the gravediggers as these are the people who know what the tomb layout is. 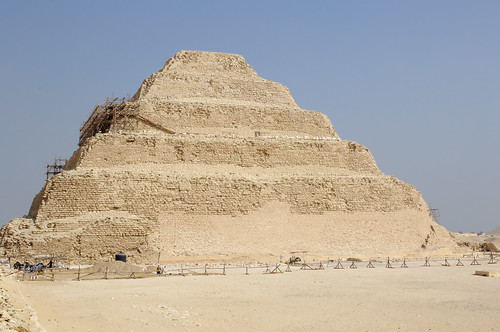 The first king of the 3rd Dynasty was Djoser whose tomb started off covered with a stone mastaba. In order to provide more protection from tunnelling from above he added extra layers to it and built the Step Pyramid. This was then extended to cover the original staircase and a new access tunnel was built with its entrance hidden in a temple. Clark thinks that the shape is as close as they could get to a hemisphere, maximising the distance from any point on the structure to the weak spots underneath and a more efficient use of stone than a bigger mastaba. Djoser’s successors also built step pyramids, not all of which were finished. The last of these was the Black Pyramid at Abu Roash, which was probably built by Huni. It was built on a rocky knoll to form the core of the pyramid which was then encased in mudbrick to give the right shape. The burial chamber was inside the knoll at thus at ground level, with an access tunnel leading up from there through the mudbrick pyramid. This made it less accessible to robbers than it would’ve been on the ground.

Elite tombs did not follow the royal tomb developments. Instead during this period they developed a novel feature of their own – a vertical burial shaft. This is much less susceptible to tunnelling than a staircase as it has a smaller cross-section and it was clearly seen to be successful in deterring robbers at least somewhat as it became a standard design feature after this. Shafts and staircases also began to be back filled with rubble, or gravel, or mud that would set like concrete.

Moving on to the 4th Dynasty Clark talked mainly about the three pyramids that Sneferu built at Meidum and Dahshur. These were true pyramids and he speculated that the smooth sides were possibly protective. They kept the feature of having the burial chamber above ground in the pyramid core access tunnel high up the side of the pyramid (and in the case of the Bent Pyramid this meant that when they changed the design part way through they had to build a new access tunnel). These tunnels were blocked with huge stones – kept in place at the top of the tunnel because the angle of the tunnel meant they wouldn’t slide. This is his preferred explanation for why the tunnels pointed where they did – physical constraints rather than symbolically pointing at the stars. One of the satellite pyramids next to the Bent Pyramid has an access tunnel that was blocked by a different mechanism – plug stones that were designed to slide down the tunnel once the restraining block was removed. This is a feature that was also used by Khufu in the Great Pyramid.

Clark also talked about some examples of elite tombs from this period, including the tomb (of Atet at Meidum) where the Meidum geese were found. These tombs included security features such as portcullises and back filling the access tunnels with liquid mud that sets like concrete. Nonetheless all the examples he gave were robbed soon after completion – in one case actually before the tomb was even finished! Another robber left behind the stone carver’s mallet that he had used to break into the tomb. So the robberies were done by the people involved in the construction of the tombs.

In conclusion Clark told us that he sees the developing tomb architecture over this period of Egyptian history as being an arms race between the robbers and the architects. The various architectural features are developed as an attempt to protect the tomb, and to make more vulnerable burial sites viable. But the original ideas behind the features were often forgotten over time and symbolic rationales were used to justify why tombs were to be built like this.