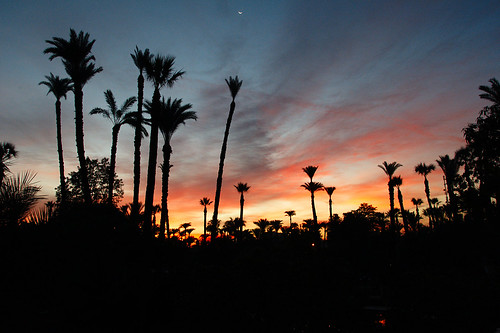 Sunrise in the Hotel Gardens

The next three days on our Egypt holiday were the start of the Luxor-based portion of the trip. The photos for this overview series are up on flickr, in a set here, they are about half taken by me and half taken by J. Not all of the photos in the set are in these posts, so do go look at the rest 🙂 If you click on any photo it’ll go to its flickr page. Maps are linked to a custom Google map with all the places on, click on any map to go to it. Once there you can click on the place names in the key to the left to zoom to them or turn on & off the visibility of the layers to see particular days on their own. Hotels are green marks, sites are red. 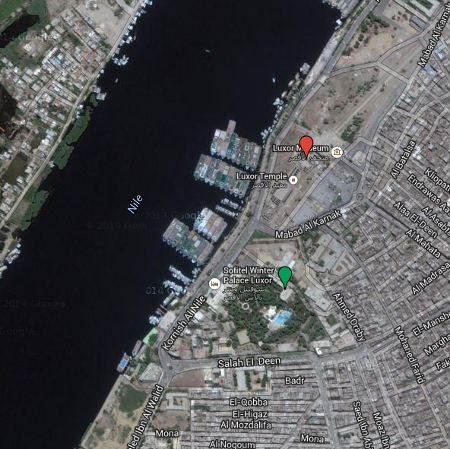 This was the day we flew down to Luxor, which meant an early start for the drive to the airport. All the stressful bits of going through an airport were handled by the Traveline rep, and the journey itself was entirely uneventful. Healthwise I was doing much better than I had been the day before – tummy was back to normal, and the cold was getting better although I’d almost lost my voice which made me sound worse! 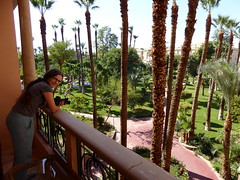 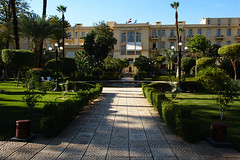 When we got to Luxor we checked into the Old Winter Palace which is a rather posh hotel right in the middle of the town (we were in the less posh wing …), and then had a few hours to kill before our sight-seeing trip of the day. We had lunch overlooking the pool and then wandered around the gardens for a while – they are a complete oasis of peace in the middle of Luxor.

Our only site of the day was Luxor Temple, and we headed off there at around 3:30pm. It felt a bit silly to be taken there by coach, coz it would only’ve been a 10 minute walk – but perhaps easier than being harassed all the way down. At the temple we first had a bit of a tour from Medhat and then had time to take photos while the sun went down. 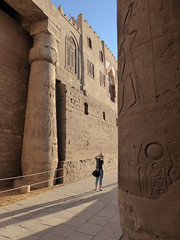 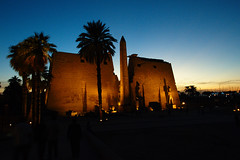 For dinner a group of us (me, J, Dylan, Margaret, John, Eileen & Jan) went out to a place in Luxor that Dylan knew. Sadly it’d seen better days – perhaps because there’s so many fewer tourists now. We’re pretty sure they had to buy in not just the food but the beer too, certainly the second beer was much better chilled than the first! 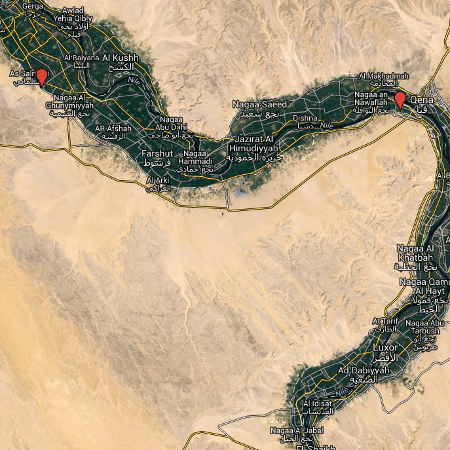 This day was the beginning of a series of extremely early starts. For five of the next six days we got up a little after 4am so that we could leave the hotel around 6am. Which did mean we got to see the sunrise several times, and even photograph it. The early start on this day was to travel to Abydos – the good road was closed to tourist traffic (it’s on the West Bank in the desert) and so we were using the one on the East Bank that goes through all the villages & isn’t as well maintained. It took over 3.5 hours to get to Abydos, but it didn’t really feel like it. Not only was there a lot of stuff to see out of the coach window (including markets, farmers etc) but also Dylan did a little talk on reading (or rather recognising) cartouches of various New Kingdom Pharaohs (as we’d be seeing many of those over the next few days). He also handed out a cartouche quiz sheet for those who wanted it – I didn’t do it, but J did. 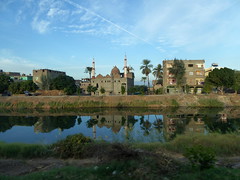 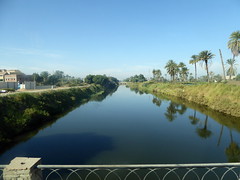 At Abydos we started with the Seti I temple which we’d been to on our last visit to Egypt, this includes the famous King list and a lot of other very fine decoration done in both Seti I’s and Ramesses II’s reigns. We also got to go into a couple of rooms that aren’t generally open to the public. After this we had some time to take photos, before we headed a little way across the sand to the Ramesses II temple that was nearby. We first walked round the outside of that, looking at the reliefs about the battle of Kadesh, before exploring inside. 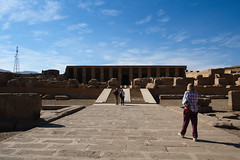 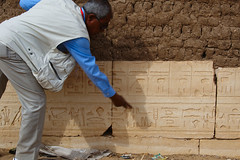 We then drove from Abydos to Dendara and ate our lunches along the way (these were boxes prepared by the hotel). At Dendara we visited the Ptolemaic era temple of Hathor where we started inside the temple looking at the recently cleaned ceiling in the first hall, then went up on the roof to see where the famous zodiac ceiling was (now in the Louvre). We also had a look in the crypt, which I hadn’t even known existed, before going round the outside of the temple to look at the relief of Cleopatra and Caesarion. 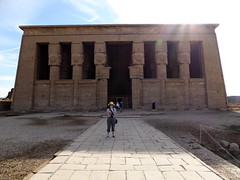 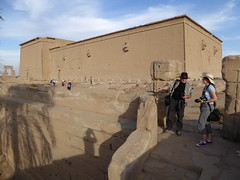 On the way out of the temple we got mobbed by the shopkeepers a bit which I found rather more stressful than I should’ve done, I think the long day combined with the previous illness was catching up with me. We almost didn’t join the others for dinner either once we were back at the hotel – but in the end I decided to go out even tho I was overtired. We ate at a restaurant Margaret knew called Nile Valley that was on the West Bank of the Nile, travelling across on the local ferry (but back in a motor boat run by Margaret’s friend). 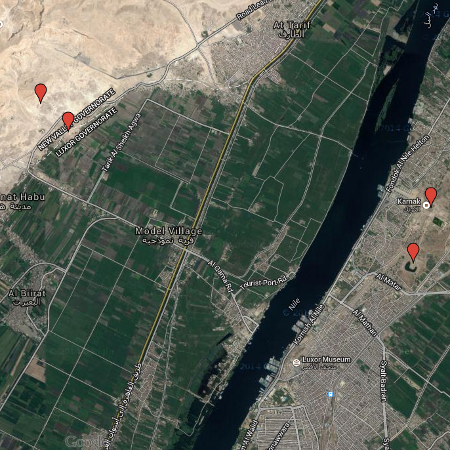 Despite the very early start (again) I felt more refreshed this day – I think I’d got the first good night’s sleep since we’d got to Egypt even if it was a short night. We started our day at Karnak Temple, arriving not long after 6am so we got to see the sunrise over the temple. The temple wasn’t even officially open yet, so we had the place pretty much to ourselves to start with except for a few archaeologists who were starting work. We got taken round various bits that aren’t normally open to the public, including some rooms in the temple of Khonsu (Karnak is a complex of several temples). Those are in the process of being cleaned and conserved and they are spectacular – give a real feel for how impressive it must’ve been when it was new. 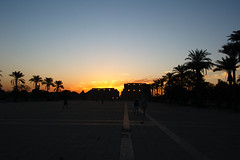 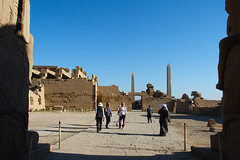 After spending around four hours looking round the complex and the associated Open Air museum (which includes several rebuilt chapels) we got bussed round to the Temple of Mut. This is actually part of the Karnak complex but has only recently been opened to visitors, and the avenue between the main temple and this one isn’t open to the public (hence driving). This temple is where a lot of the Sekhmet statues are from, and there were still loads of fragmentary ones still in situ. While here we also got to walk round the sacred lake which was very pleasant with a shady viewing spot on the other side of it – pleasant despite the rather predatory guardians at this site.

We were back in the hotel for lunch, so I took the opportunity to change more money then we had lunch in the pool cafe with Eileen and Dylan. A moment of relaxation and peace before we were back out for more sightseeing!

The afternoon was the first organised trip across the river to the West Bank. We first went to see several Nobles Tombs. The decoration in these has more scenes of everyday life than the decoration in royal tombs, which makes them interesting for what they show as well as for their beauty. The ones we visited this day were those of Rekhmire, Sennefer, Userhat, Khaemhat and Ramose. 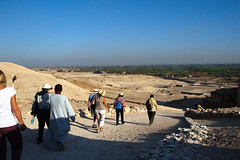 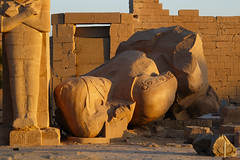 The last visit of the day was to the Ramesseum, in time for the sunset – so we bookended the day with sunrise and sunset at a temple. Amongst many other things to look at the Ramessum also has the enormous statue that was the inspiration for Shelley’s Ozymandias: “Look on my works, ye Mighty, and despair!”.

In the evening we’d decided in advance we weren’t going to be social – still rather tired even after having a better night’s sleep. Instead we took the laptop and our diaries along to the Royal Bar (in the hotel) and ate there. The food was bar food, so we shared a club sandwich and some meze. I was also rather impressed with the waiter – for our second round of drinks we just ordered one beer to share, but didn’t actually say that to him. He’d clearly been paying attention while we discussed it and when he brought it across poured it into two glasses for us without being asked.