On Sunday Sarah Doherty came to talk to the Essex Egyptology Group about the ongoing excavations at Gebel Silsila (or Gebel el Silsila, her slides used the two name interchangeably). She split her talk into two halves (so we could have tea and cake in the middle) – the first half was about the work done at the site in 2012 and 2013, the second half covered 2014 and the plans for the future. The first half was also something of an overview of why the site is interesting, and the second half included more details on the day to day life of the archaeologists working there.

Gebel Silsila is a large site in Upper Egypt where sandstone has been quarried throughout the majority of Egypt’s history. It’s situated about 40 miles north of Aswan and 500 miles south of Cairo, near Kom Ombo. The site itself is enormous – covering 2.5km of either side of the Nile. Some of the quarries on the site can be seen in Google’s satellite imagery – I’ve stitched together a couple of screenshots below. The red marker is in the same place on both zoom levels and in the zoomed in insert you can see a bit up and to the left of the red marker a jagged line that is the edge of one of the quarry workings. Unusually for Egypt the site is mostly unworked – Petrie was there briefly, and a later French archaeologist, but most of the site is completely untouched. 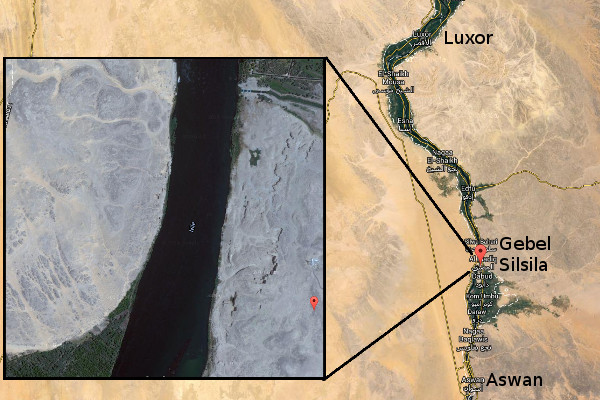 Doherty told us that there are several objectives for the team who are working there. These are to do an epigraphic survey (i.e. catalogue the inscriptions and graffiti at the site); to do topographical documentation of the site; to analyse the ceramics at the site (Doherty’s own speciality); to survey the prehistoric rock art; to investigate the quarry marks found at the site; to investigate the quarrying techniques used by the Ancient Egyptians.

A lot of work was done in 2012 on mapping the East Bank and numbering the various quarries – Q1 to Q51. The main quarry is Q34 (it’s the visible one in the Google imagery) and there are around 4000 epigraphic inscriptions in the quarry, including quarry marks, graffiti pictures and textual inscriptions. Doherty returned to Q34 later in the second half of the talk for a bit more detail. 2013 saw more documentation of epigraphic inscriptions in the Roman era and Ramesside era quarries, and the beginnings of a site wide rock art survey. Rock art is recorded by photography, and also by copying it onto an acetate overlay – both of these are non-destructive methods.

The earliest of the rock art is around 11,000 years old – dating from just after the last Ice Age. The pieces from 9500BC to 6500BC are referred to as epipaleolithic, and are generally created from rows of dots pecked into the sandstone. The designs may be geometric, or some might represent objects like fishtraps. Doherty said they are similar to designs found in other Wadi sites in Upper Egypt. The next most recent class of rock art is the Predynastic stuff – this dates from the Naqada I period, around 4000BC – 3600BC. This often depicts what is now Ethiopian fauna but at the time was also present in Egypt. She told us about one rock that they refer to as “giraffe rock” which has depictions of 6 giraffes, plus some ostriches and a crocodile. The scenes are like those found on Naqada I pottery, and in the painted tomb at Hierakonpolis.

From Dynastic times there are both pictorial and textual inscriptions – covering the whole period from early Dynastic to the Late Period. The pictures include human figures for the first time and generally look like crude versions of official art from temples & tombs. There are a lot of inscriptions from the Graeco-Roman period. Again there’s a mixture of literate and non-literate inscriptions. The non-literate ones include quarry marks and lots of drawings of feet (a sort of “Kilroy woz here” of the Graeco-Roman world). The literate ones include lots of demotic inscriptions. There are also a few bits and pieces from later eras – some Coptic crosses, some French (I think she said they were from the Napoleonic expedition?) and even Howard Carter’s initials.

Doherty started the second half of the talk by giving us an idea of the everyday life of an archaeologist on the team. They live on a boat moored on the Nile at the site and generally get up at 6am. They have to make their own breakfast as their chef doesn’t get up till later! After a 6:30am breakfast they get their kit together for the day then each head off to the area they’re working on. Depending on where on the huge site they’re based they might travel by foot or by boat (not the living boat, another one). They then work until lunch at 10am, after which it’s back to work. She said they generally finish at 2pm and return to the boat with their discoveries of the day. The evening meal is at 3:30pm, after which they do more analytical work in the evening. Or maybe take some time for a swim in the Nile.

Doherty has spent two seasons with the team – March-Apr 2014 and Nov-Dec 2014. The second season differed from the first as there is now also a baby in the team! The team leader and her husband (also a member of the team) had a baby last summer who they brought with them. Doherty said she spends a lot of her time walking about the site. Partly for archaeological reasons: mapping, topological surveys and finding new sites (she’s particularly looking for where the workers lived). But also for more pragmatic reasons: as with every arcaeological site in Egypt at present looting is a concern, and so the team are keeping an eye on the area to see if there are signs of illegal digging or anything else that needs reporting to the authorities.

The major part of Doherty’s work is doing a survey of the ceramics at the site – as she’d mentioned earlier in the talk the site hasn’t really been excavated before, so the pottery has pretty much not been touched since the Romans left and so there is a lot she will be able find out from it. On a huge site like this there are tens of thousands of pottery shards (as well as the thousands of inscriptions). In the November to December season last year she analysed around 5,000 shards from Q34 so she was explaining how it’s important to record and categorise the data as they go along. Each pottery shard she collects is bagged up, sorted and categorised. She categorises them by a variety of properties – starting with broad categories like “bowl”, “jar” etc, and sub categories like “base”, “handle” and so on. She also separates them out according to the composition of the clay used to make them. For Roman era pottery this is very instructive – she can date pottery quite narrowly by what sort of clay is used. This means she knows that most pottery from Q34 is from the early 1st Century AD. She does also find some older pottery, including the occasional New Kingdom piece. Some of this is blue painted ware, like that found in Amarna – it’s generally thought to be used by the elite of Egyptian society but Doherty thinks that finding it at Gebel Silsila suggests it’s not as elite as all that.

Doherty also told us about some of the sites where she’s found worker huts. These aren’t permanent living quarters – she says there’s no evidence for people living at the site full time. The sites appear to be organised by function. In one place (above one of the narrow corridors into Q34) she has found evidence of pots used for cooking, another place (that’s she’s calling Pottery Hill) has little evidence for cooking but does have a lot of food storage vessels. Yet another site (Mo’s Tavern) has the remains of vessels that contained beer.

Quarry Marks are one of the types of inscriptions found in the site, and there are a lot of them in the Q34 quarry. They come in different types, some of them look a bit like hieroglyphs but some of them don’t. The question the team are trying to answer is what they mean – are they stone masons’ marks? Are they religious? Both? The answer seems to be that it depends on context. Even for the ones that are practical in nature there are differences in different contexts. On the walls of the quarry they often find height/width/depth marks indicating where a block needs to be cut, or other functional mason marks. On cut blocks there are marks to do with transportation, with quality control and with destination and ownership. In answer to a question at the end of the talk she said these same marks are found on blocks in temples – primarily at Kom Ombo but other places too.

She finished up by talking a little bit about the issues the site faces and about plans for the future. As well as the “normal” problems of looting, vandalism and accidental destruction by tourists there are other problems that the site faces. For instance it is now illegal to quarry at the site, but in practice the local people do still come and quarry sandstone there. In terms of their future plans one thing they are working on is 3D laser scanning of the rock art which will let them look at it much more closely than is possible on site (she showed us a video demonstrating how you can easily alter the light source over a virtual image of a piece of rock art to bring out details). They are also hoping to make better facilities for tourism – both to keep the tourists where it’s safe for the archaeology, and to inform them about more of the site. Another plan is to provide a field school for the local Egyptian Inspectors, who often have little chance for hands-on training in modern archaeology during their schooling.