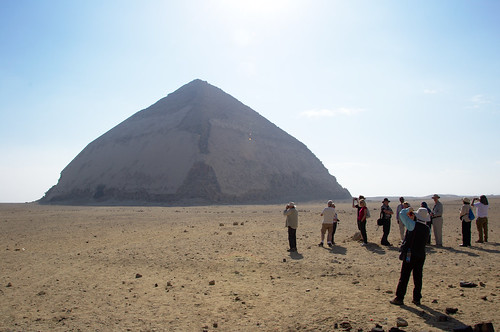 Dashur is a little way south of Cairo, and just south of Saqqara. It’s a site with a few pyramids and other burials, and is notable for having two of the earliest true pyramids – both of which we got to see. There are also other later pyramids in the area, but we didn’t get to go close to them. My photos from this site are now up on flickr, click here for the whole album. 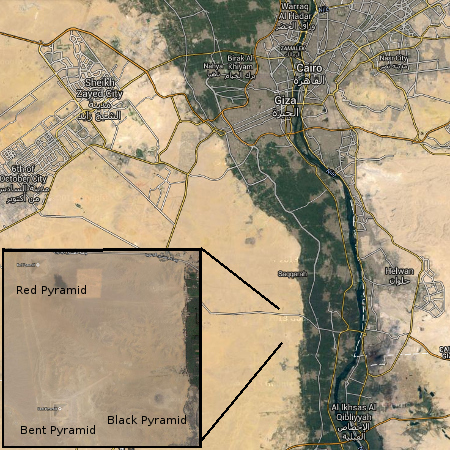 Where the pyramids are at Dashur

On the screenshots above from Google maps I’ve marked where Dashur is and the names of the three pyramids I have photos of. The plan below I got from wikipedia (drawn by user Janmad) and I’ve labelled the same three pyramids here.

Plan of Dashur drawn by Janmad

The Red Pyramid and the Bent Pyramid were both built for the same Pharaoh – Sneferu. He was the first of the 4th Dynasty Pharaohs, ruling some time around 2600BC. His son and successor, Khufu, was the builder of the Great Pyramid at Giza (which we’d seen the day before – post). And we’d seen some of the burial goods of his wife, Hetepheres, in the Cairo Museum (post). Sneferu actually had three true pyramids built for himself – he started at Meidum, where he had a step pyramid built that he later turned into a true pyramid after completing his other pyramids. His next pyramid was the Bent Pyramid. 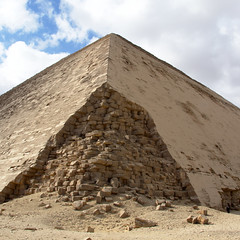 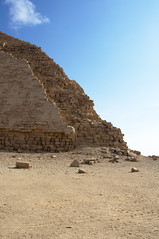 This pyramid gets its name from the change in angle part way up the pyramid. It wasn’t a planned feature, rather a response to an unexpected engineering problem. The original angle was quite steep which meant the pyramid would be quite tall relative to the dimensions of its base. As it was being built it started to show worrying signs that it would be unable to support its own weight, and so the pyramid was finished off with a much shallower angle meaning that less stone (and hence less weight) was resting on the base. 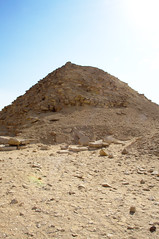 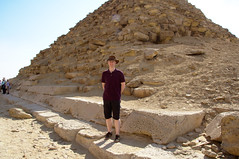 The Satellite Pyramid at the Bent Pyramid

We didn’t get to go in this pyramid, just looked around the outside. One of the interesting features of the outside is that a lot of the outer casing is still attached. On most pyramids this has been removed for reuse at some point over the millenia. I’m not sure if there’s a particular reason for the survival of the casing, or if it’s just by chance. We walked all around the pyramid, which was particularly cool as last time J and I visited we weren’t allowed to do that – the tourist policemen came and stopped us when we started to walk round to see the south side of it. So I was quite surprised to discover that there are a couple of other buildings, one to the south and one to the east of the Bent Pyramid. To the south is a small pyramid whose function isn’t clear – the burial chamber inside it is too small for a person. Medhat told us about a couple of the theories. It’s possible it was for the symbolic burial of the Pharaoh’s Ka or Ba (parts of his soul in Egyptian mythology). It’s also possible it was for offerings (perhaps in conjunction with being for part of his soul). 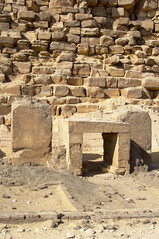 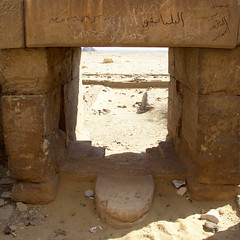 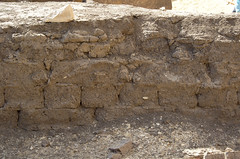 The small shrine at the Bent Pyramid

To the east there is a small mortuary chapel – which now consists mostly of a door frame and an offering place. This offering place is a stone slab shaped like the hieroglpyh for “offering” – hetep, which is a stylised loaf of bread on a reed mat. There are also mudbrick walls round this shrine, some of which are the original mudbricks from the Old Kingdom construction – I found that fascinating, I’d never imagined mudbricks could survive for four and a half thousand years! The Old Kingdom bricks are larger than the modern ones that have been used to rebuild the wall (and the modern ones are also marked on one surface with a makers stamp, so that future archaeologists can tell which were from when). 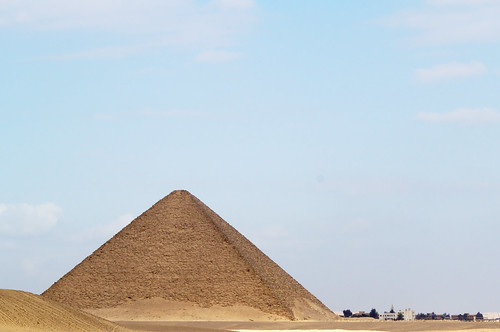 So at this point Sneferu has two pyramids – a step pyramid in Meidum, and an almost true pyramid in Dashur. Despite having his workforce finish the Bent Pyramid he also orders work to start on another true pyramid, learning from the mistakes of his first attempt. This is the Red Pyramid (which we actually visited first at the site) – it is called that because the stone it is made out of is red granite. It’s also known at the North Pyramid according to the book about pyramids that J owns (“The Complete Pyramids” by Mark Lehner) but I prefer the more evocative name 🙂 The Red Pyramid is probably where Sneferu was actually buried, although I don’t believe any sarcophagus or grave goods or body have been found. 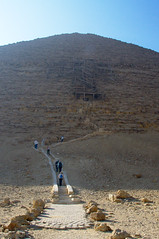 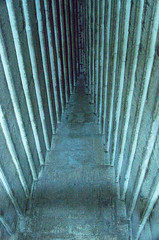 The Red Pyramid, Outside and In

We got to go inside the Red Pyramid while we were there. To get in you first climb a bit of the way up the outside of the pyramid, and then descend through a narrow low ceilinged corridor back to ground level. It’s pretty steep, and the roof was low enough that I was bent over almost double – so much worse for the taller people of the group (like J)! There are three chambers inside all of which have corbelled ceilings. This is a construction method where each block as you go up vertically overhangs the one below it, leading to a pointy ceiling that looks like it’s made from the underneaths of two large staircases. It’s one of the impressive things about this particular pyramid – a demonstration of the Egyptians’ skill at working with such large masses of stone. The first two chambers are on the same level as each other, connected by a short low passageway, and then the third chamber is a bit higher up and the passage way leading to it is way up near the ceiling of the second chamber. To get there these days there’s a modern wooden staircase built alongside the wall of the chamber. 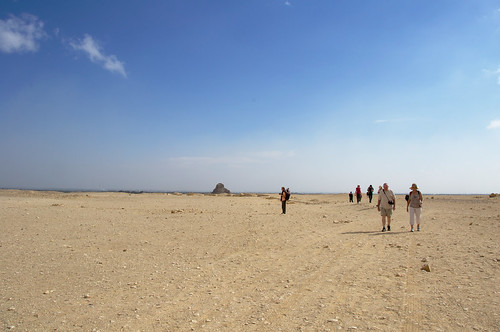 The Black Pyramid in the Distance

As well as the two pyramids we got a proper look at we also saw a third pyramid in the distance, and from some angles the air was clear enough to get decent photographs (with plenty of zoom!). This pyramid is known as the the Black Pyramid, and it’s much more recent than the two I’ve just been talking about. It’s still nearly four thousand years old, however! It was the first pyramid constructed for Amenemhat III, a Pharaoh of the Middle Kingdom who reigned around 1850BC. The construction methods for his pyramids and those of the other Middle Kingdom Pharaohs weren’t the same as the Old Kingdom ones. Instead of using stone throughout the structure they had mudbrick cores, which were then clad in stone. 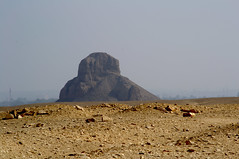 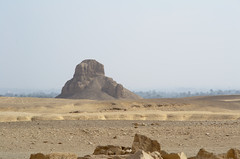 The Black Pyramid was another failed attempt at a pyramid, and Amenemhat III was eventually interred at his second pyramid built in Hawara (that we visited later that day). Like the earlier Bent Pyramid the project was not as well planned as the builders might’ve hoped – in this case the foundations weren’t entirely stable as it was closer to the Nile Valley (and thus the water table was closer to the surface). It was also an overly complex structure inside, which meant it wasn’t as capable of supporting the weight of the outer casing as it needed to be. These days the Black Pyramid doesn’t look particular pyramidal – now the outer casing has been removed (“mined” for stone over the millenia) all that’s left is part of the inner mudbrick core.