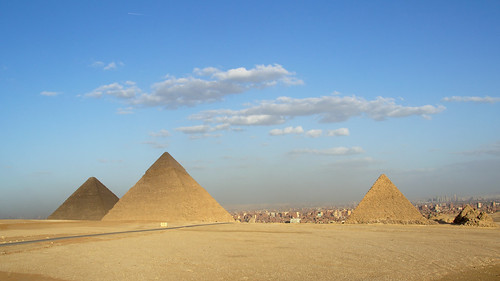 The second site of the holiday was the pyramids at Giza, where we not only saw the pyramids from the outside but also got to go into the Great Pyramid, plus an Old Kingdom royal lady’s tomb nearby. The photos in this post are a selection from the whole set which is up on flickr click here to get to it or on any photo. You aren’t allowed to take photos inside the pyramids or other tombs, so these are all of the outsides and the surrounding views. (The plan of the plateau is one I found on Wikipedia with a licence that meant I could use it, if you click on it you go to it’s own page.) 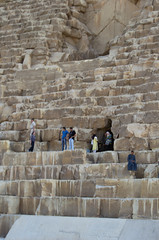 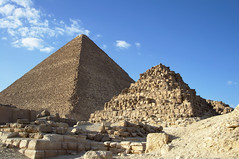 As you can see on the plan below the ticket office is placed so that you walk from there towards the Great Pyramid to get the full effect of the sheer size of it! As I said we managed to get tickets to go inside it – a benefit of the general reduction in tourist numbers is that even in the afternoon there are still tickets available. I don’t think I’d bother going in a second time, but it was well worth doing once. The entrance that the tourists go in is a little way up the northern face of the pyramid, and at first it’s a fairly rough tunnel but you soon get to one of the real internal passages which is made of properly smoothed stone. My overriding impression of the passageways is that they were steep, low or both – but nowhere near as claustrophobic as I’d expected from what I’d read or been told.

Plan of Giza Plateau made by MesserWoland

There are two rooms that you get to see inside the Pyramid – neither of them decorated (as that didn’t start to happen until the 5th Dynasty). The first of these is the grand gallery which has a high corbelled ceiling. Then you go through a passageway where the portcullis blocks were (to seal off the burial chamber) into the burial chamber itself. This is a large rectangular room made of dark stone, with only the (damaged) sarcophagus of Khufu left in it. Somehow it was being in this room more than anything else that brought home just how very very big the Great Pyramid is – here we were in somewhere that’s a pretty small part of the whole structure, but compared to the size of me it was a large room. 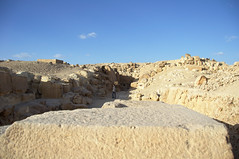 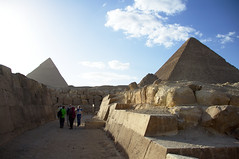 Outside the Tomb of Meresankh III

Our next stop was the tomb of Meresankh III, which is in the Eastern Cemetery (on the map above it’s just below the “y” of “Cemetery”). Despite this being one of the standard extra tickets that you could buy on arrival it still needed to be specially unlocked for us, which I found a little odd. The tomb itself is on two levels – “upstairs” (i.e. the level you enter it on) is a decorated tomb chapel and “downstairs” is the undecorated burial chamber, nowadays reached by a wooden staircase in the shaft down to it. The walls in the tomb chapel were mostly covered with low relief carvings, including scenes of animals being lead to the tomb and of birds being caught. There were also several figures carved into the wall – not quite statues as they were still attached to the wall at the back of the figure. These dominated the right hand end of the chapel (looking from the door). Meresankh’s titles included King’s Wife and King’s Daughter. We knew she was Khafre’s wife, and speculated at the time about whose daughter she was – but I’ve since looked her up and she wasn’t actually a Pharaoh’s daughter, she was a granddaughter who had the title anyway. So she was Khufu’s granddaughter, her parents were Hetepheres II and Kawab (both children of Khufu) and she subsequently married her uncle Khafre. She wasn’t the mother of the next Pharaoh. 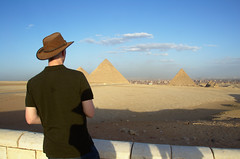 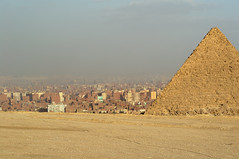 Views from the Viewing Point

After this we headed off to the viewing point (to the west of the plateau, not on the plan above) as our last port of call at Giza, to take more photos of the Pyramids. This is a slightly raised area that gives the impression there aren’t any people around the Pyramids. En route to there I also took some pictures of other things – camels, views across Giza and other pyramids that you can see from Giza (those at Saqqara, including the Step Pyramid). 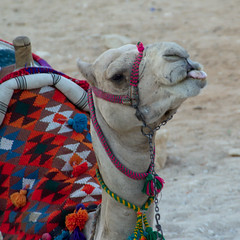 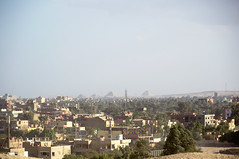 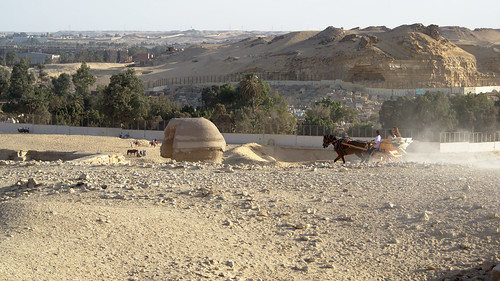