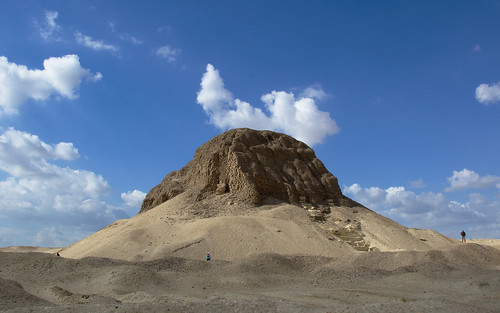 The Lahun pyramid, near the modern village of Illahun near Faiyum, was built for Senwosret II. He was a Middle Kingdom Pharaoh who reigned around 1880BC. He was the fourth Pharaoh of the 12th Dynasty coming between Amenemhat II and Senwosret III. The pyramid is clearly visible on the imagery on Google Maps as you can see in the screenshots below. My overall impression of the site from visiting is actually mostly about the colours – the cream of the desert and the limestone, the dark mudbrick pyramid, the red sandstone fragments and the green fertile land on the horizon beneath a blue sky with white clouds. Photos are on flickr, as always, click here for the album which has some more photos than just those in this post. 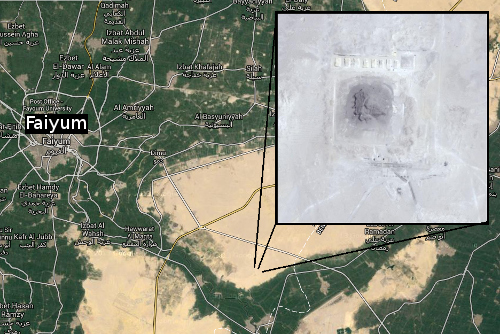 Like other Middle Kingdom pyramids it is constructed from a mudbrick core which was then clad in stone. And as with other pyramids the stone cladding was “mined” for re-use in later building projects. The mudbrick core was built on top of a platform of the limestone bedrock. First a cross was built with stone blocks, to make a frame work for the pyramid. The gaps in between were filled in with mudbrick, like slices of cake. Then then whole core was extended up to full height using mudbrick. The stripes of the cross walls are still obvious today. 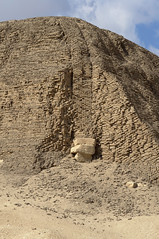 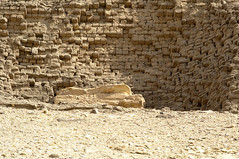 Lahun Pyramid, showing the limestone blocks and the vertical stripe in the mudbrick core

We approached the pyramid from the southeast and then walked round it. To the north of the pyramid are the remains of eight mastabas, and a second smaller pyramid. Like the main pyramid these were built on a base of the bedrock. The mastabas were probably each topped with a red sandstone block, which probably had solar significance to the Egyptians. There are still fragments of sandstone on top of or next to the mastabas. I thought the smaller pyramid looks much like a mound of rubble when you’re actually there – it’s clearer on the satellite imagery that it’s a structure. Petrie found no sign of a burial chamber in this pyramid. It’s generally labelled on plans of the site as “Queen’s Pyramid” because of its location on the north side of the main pyramid, however the lack of burial chamber suggests it might be a symbolic satellite pyramid (like that at the Bent Pyramid) even though it’s in the wrong place. It’s worth noting here that the entrance to the main pyramid is also in the “wrong” place, as it is a shaft a distance from the pyramid to the south rather than next to the north face of the pyramid. 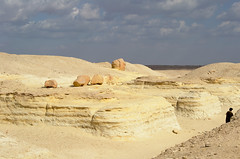 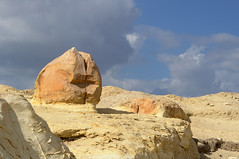 Although we didn’t see much (if any) of the remains of it this site includes a Middle Kingdom town. It was where the priests for the cult of Senwosret II lived. As it was excavated extensively by Petrie a lot of the items from it ended up in the Petrie Museum in London. When the Essex Egyptology Group had a trip there in 2013 we were given a talk by Wolfram Grajetzki about those items (post). That had been an interesting talk, so I was particularly pleased to’ve had the chance to see the place the items had come from. 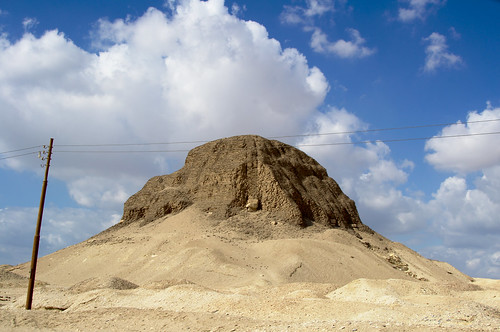