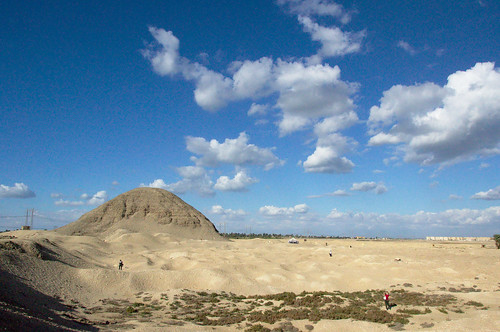 The last of the pyramids that we visited on our holiday was the one at Hawara. It’s not that far from Lahun, and was the last stop on that particular day – afterwards we just had lunch and then drove on to the hotel on the lake shore where we were staying at that night. My photos from the site are up on flickr, click here for the full set, or click on any photo to go to the photo page on flickr. 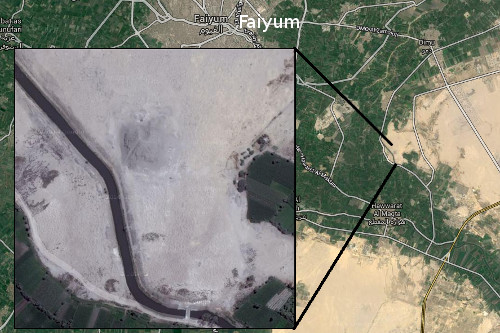 This was the most recent of the pyramids we saw – built by the Middle Kingdom Pharaoh Amenemhat III. He was the grandson of Senwosret II who built the Lahun pyramid (post) and ruled for 46 years around 1850BC. This pyramid was his second pyramid, the first one we’d seen from a distance earlier in the day at Dashur (post). After that first one was abandoned due to structural concerns Amenemhat III clearly decided to do something completely different – the second one is at this different site, and also has a different layout of the complex plus different internal structure. Mark Lehner in “The Complete Pyramids” speculates that there may’ve been a theological reason for such sweeping changes, as well as the structural concerns (but he doesn’t speculate about the nature of potential theologies). 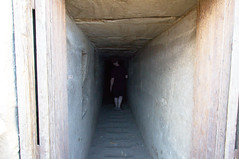 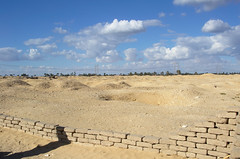 As is the case for other Middle Kingdom pyramids this one is built with a mudbrick core which was originally surrounded by an outer casing of limestone. The stone is long since gone – “mined” for use in other buildings in the area. The entrance to the pyramid is on the south face, and when we visited we could see into the downward sloping passage. The water table here is quite high, and the passage quickly descends into water & mud – I assume in antiquity it wasn’t quite so high otherwise the pyramid wouldn’t’ve been built here! It was definitely that high by the time Petrie excavated here as he had trouble exploring all the passages under the pyramid due to the conditions.

The pyramid is not the only interesting feature of this site, although it is the only one that has much visible above ground. To the north of the pyramid was an area that we didn’t get to explore (due to safety concerns, illegal digging has destabilised the ground and presumably illegal diggers are sometimes present). This is a later Roman era cemetery, and is where Petrie discovered the mummy portraits known as the Faiyum portraits. Another case of it being cool to be able to say “I’ve been there” even if there’s not much there to see. 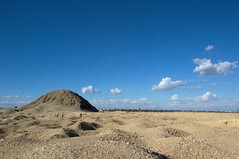 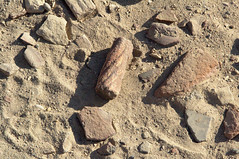 To the south of the pyramid was an area that we did get to explore – again no structural elements visible above ground, but this was the site of the Labyrinth. Dylan has made a study of this site so he gave us a talk about it later in the day after we’d visited. The Labyrinth was part of the ancient tourist trail, and written about by authors such as Herodotus and Strabo. The last attested visitor was the Emperor Septimus Severus in around 200AD. Despite probably inspiring the Cretan Labyrinth (associated with the myths of the Minotaur) the labyrinth at Hawara was not actually a labyrinth as such. Instead it was a large and complex building, of the sort you could get lost in if you weren’t careful (when Dylan said that it made me think of where I used to work in UEA). It was built initially as the mortuary temple for Amenemhat III and over the millenia it was extended and remodelled by his successors. By the time Herodotus or Strabo were visiting it would’ve been ruins, and Dylan said it’s possible they weren’t even shown the right place on the site because the descriptions don’t quite match up with the archaeology.

Although there are no visible traces of the Labyrinth that part of the site was still fascinating. It was completely covered with pottery fragments of all sorts of different types. So we spent a bit of time just wandering around on it pointing out interesting looking pieces before we had our lunch and left the site. 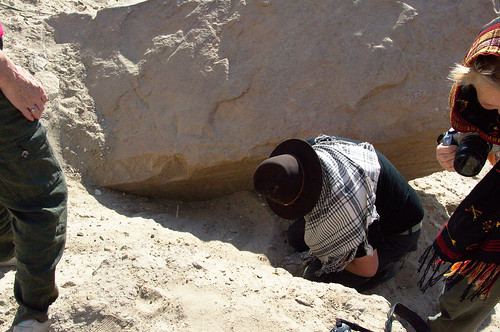