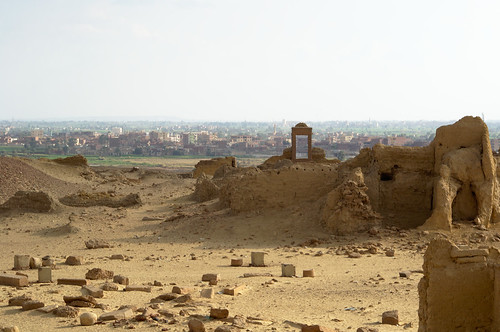 Karanis with the modern city in the background

Karanis is the site of a large Graeco-Roman town, to the east of Lake Qarun just outside the modern northern edge of cultivated land at Faiyum. It was a pretty large town, covering around 450 acres and there are still quite a lot of mudbrick structures on the site (although not as much as there were at the beginning of the 20th Century, which I’ll come back to later in this post). My photos from our visit are up on flickr, click here for the full set. 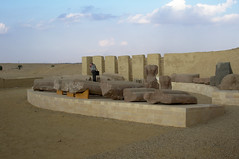 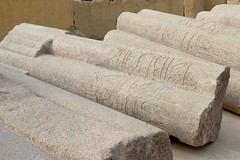 We started our visit in the Open Air Museum which contains pieces of sculpture and stonework from a different nearby site – Crocodilopolis. As the modern city of Faiyum occupies the same site as Crocodilopolis the pieces that have been excavated are kept out at Karanis where they can be more securely looked after. When we visited there were fairly new signs up explaining something of the history of the site they came from. The Ancient Egyptian name for Crocodilopolis was Shadet, and it is mentioned in the Pyramid Texts, so clearly existed around 4,300 years ago in the Old Kingdom era. It prospered during the Middle Kingdom, and many of the pieces in this Open Air Museum are from that time period. During this time the swamps in the Faiyum Oasis area were drained and the region became an important agricultural area. From the first records of it Shadet was one of the main centres of worship of the crocodile god Sobek, and this continues into Graeco-Roman times which is why the Greeks called it Crocodilopolis. Some of the granite columns we saw were the remains of the Middle Kingdom temple to Sobek (built in Amenemhat I’s reign, c. 1975 BC), which was demolished in Graeco-Roman times. 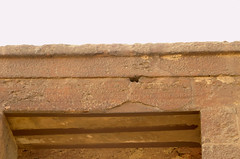 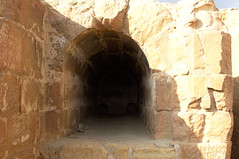 After spending some time looking at these monumental remains we walked through the ruins of Karanis to look at the two temples that still stand (to some extent). These date to the Graeco-Roman period and look very similar to each other in layout and construction. The South Temple (which we visited first) has a Greek inscription above the door. It is known to be dedicated to a crocodile god – my notes say “a form of Sobek” but wikipedia says “the local crocodile gods Pnepheros and Petesouchos”. I’m not sure if these are contradictory or not, however Richard Wilkinson’s book “The Complete Gods and Goddesses of Ancient Egypt” doesn’t mention either of those local gods by name (although there is a passing reference to minor crocodile deities assimilated into Sobek).

I mostly looked at the rooms inside the South Temple, and then climbed on the wall of the North Temple for the view (there was no roof left on either temple). The South Temple’s inner sanctum (at the far end from the door) included 2 niches for storing mummified crocodiles (and I think the North Temple was the same). I couldn’t help but think that these looked a bit like medieval bread ovens in size and shape – which is possibly not the right sort of thought to have about the space where a crocodile god resides! At the two long sides of the building were several smaller rooms which might possibly have been storerooms. 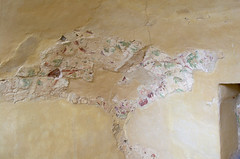 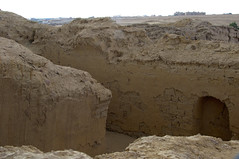 The view from the top of the North Temple gave me an appreciation of the size of the city and of how much remains today. As we made our way back to the Dig House Museum at the entrance to the site we walked along what must’ve been city streets between the houses. Medhat pointed out a couple of particularly interesting structures. One of these was a Roman bath house which had a large room with the remains of a brick seat running around the wall, and a smaller alcove with an actual bath in it. This still had some roof left and also some of the painted decoration was still visible. Obviously this hadn’t been made of mudbrick, as it wouldn’t’ve worked very well at keeping the water in 😉 The other structure was a particularly well preserved house – the modern path surface is higher than the ancient one and it didn’t have a roof so you could see in from the outside. The walls were finished with a layer of mud used much like plaster, and you could see alcoves in the walls that could be used as cupboards and lamp shelves. 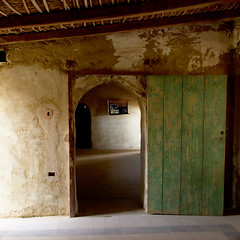 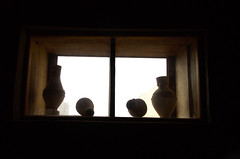 Near the entrance to the site is the Dig House Museum, this is the reconstructed building in which the University of Michigan team lived while they worked on excavating the site in the 1920s. The museum felt like it wasn’t quite finished yet (not sure if it was or not) – it was pretty sparse, but there were several information panels about the excavation and the site. One of the big finds from the excavation were a lot of papyrii which were mostly tax records, and give an insight into the average Egyptian’s life under Roman rule. The information which most struck me when reading these panels was that a lot of the site was destroyed even as the archaeologists were excavating. It was customary in the late 19th & early 20th Century for the locals to “mine” the area for mudbricks to use as fertiliser. Which means a lot more survived until almost the modern day before being destroyed 🙁 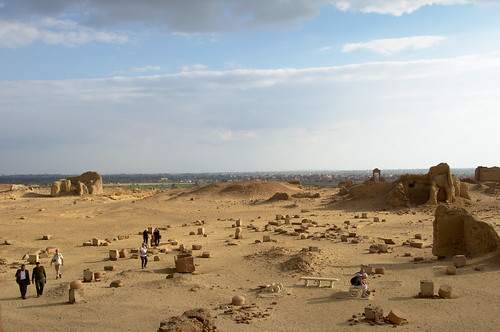