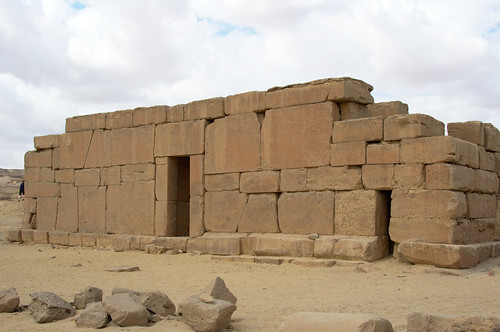 Qasr el Sagha is about 8km north of Dimai and is the site of a small Egyptian temple. We visited there after we’d been to Dimai (post) and to the petrified forest (post). My photos from this site are up on flickr, click here for the full set.

The only part of the temple still standing is the innermost part – with the shrines and and their antechamber. It’s undecorated, and never did have any decoration, which makes it hard to identify when it was built. By style it is either Old Kingdom or Middle Kingdom, but there is disagreement as to which it is. The structure uses Old Kingdom building techniques with large limestone blocks cut to fit securely together without mortar. However the layout of the temple most closely matches one with inscriptions naming Amenemhat I, a Middle Kingdom Pharaoh. 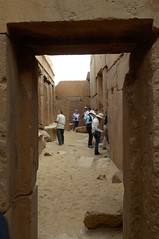 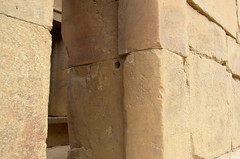 Inside the remaining building are 7 shrines that would once have held statues of gods but the lack of decoration means we don’t know who they were dedicated to. There is a room in front of them, and two side rooms. In the entrance way you can see a little hole in the door frame part way up one side – there’s actually a passageway running inside the wall at this point letting a priest or gatekeeper hide here to keep an eye on who is coming and going. The entrance to that is on the outside (nowadays) but when the temple was less ruined there would’ve been an outer courtyard enclosing the front of the building. There is currently nothing standing of this courtyard, just several pieces of masonry scattered across the ground. 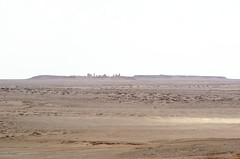 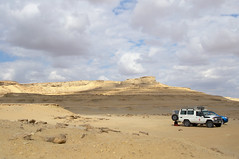 Desert Scenery (with Dimai in the distance in the lefthand one)

Today it’s in the middle of nowhere – spectacular views of the desert across to Dimai, but no signs of human habitation (there are several more pictures of the desert in my flickr album). In the Middle Kingdom era Lake Qarun was much larger and so the temple was closer to cultivated land. Medhat also told us it was on a trade route running across the desert to Egypt, the Mediterranean and beyond. 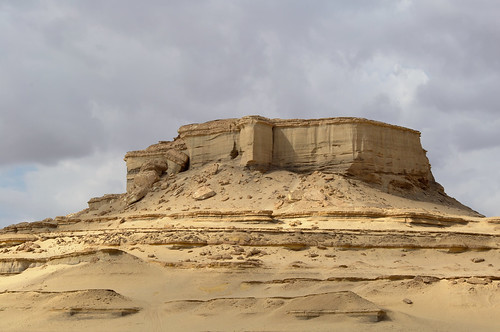