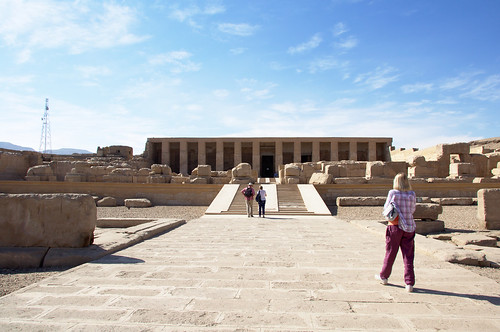 Abydos was an important site for the Ancient Egyptians right from the beginnings of their culture. The first Pharaohs (including Narmer) were buried there, it was the capital of one of the nomes (adminstrative regions) and there were several temples built on the site over the course of the millennia. At first it was sacred to the god Khentiamentiu and during the First Intermediate Period this god began to merge with the god Osiris whose cult was rising in significance. As time went on the association of the site with Osiris grew stronger and eventually the 1st Dynasty cemetery was regarded as the site of the burial place of Osiris (with the tomb of Djer being the focal point of this belief). The best known structure in modern times is the temple begun by Seti I and finished by his son Ramesses II, known by the Egyptians as The Mansion of Millions of Years of King Menma’atre Who Rests in Abydos. (Menma’atre is one of Seti I’s other names.) This was the first of the two temples we visited at Abydos, my photos are as always up on flickr – click here for the full set, or on any photo for a larger version. 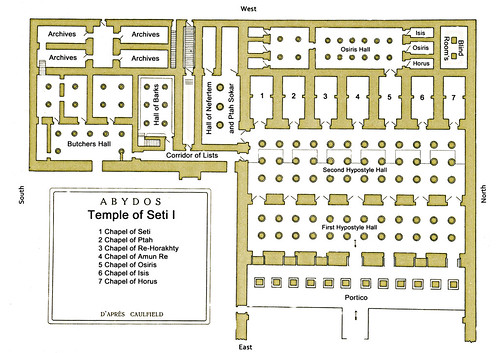 Plan of Seti I Temple at Abydos
From kairoinfo4u’s flickr

(The plan above isn’t one of my photos – it’s from someone else’s flickr account with a licence that meant I could use it in this post). We started our visit at the eastern end of the temple. In front of the portico there are a couple of courtyards that are not very well preserved and we didn’t spend much time in them – just long enough to take a photo or two. We started looking more closely at the site at the portico. There are 12 square pillars along the front of the portico and each face of them is decorated with the Pharaoh standing close to a god. The way they are standing together is intended to indicate a more formal version of “me & the gods, we’re >< that close, we are!” 😉 The wall behind the columns was originally intended to have 7 gates in it, each leading through the hypostyle halls to a different shrine. But Ramesses II changed the design, leaving open only those that lead to the shrines of Amun, Osiris and Horus. Nowadays you enter through the central one that leads to the shrine of Amun. 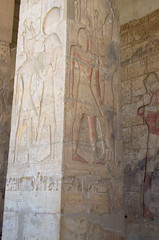 In the first hypostyle hall Medhat paused to show us the “helicopter hieroglyphs” so we could all have a giggle at them. There is a section of carving right near the roof where some text has been re-carved later to read something else. And now that there is no paint, and the carving has all eroded a bit, it looks rather like there’s a helicopter, a tank and a Zeppelin airship. My (sadly slightly shaky) zoomed photo shows how you can both see those but also see the details that make up the optical illusion – particularly in the “tank” one where you can see the fingers of the hand hieroglyph that’s one of the two overlapping ones. I’m pretty sure the helicopter has an arm-holding-incense one as part of it, and it wouldn’t look nearly so convincing as a helicopter if it didn’t have a bit of damage cutting off the nose! Anyway – it’s an entertaining optical illusion but nothing else 🙂 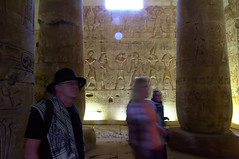 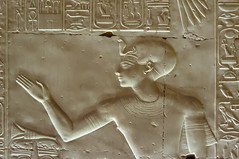 Back to more Egyptological matters – we next looked at the decoration at the north end of the first hypostyle hall as a reminder of the general style of Ramesses II’s art. This was so that we had the proper baseline to do a compare & contrast with the second hypostyle hall when we moved on to it. This hall was completed in the reign of Seti I, and the difference between the two styles is very obvious. We looked again at the northern end – and the carving on the north wall is stunningly beautiful. 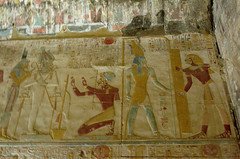 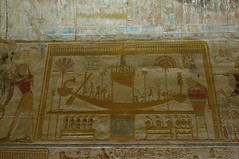 Decoration in the Shrines

Next we spent a bit of time looking at the 7 chapels which open off the west wall of the second hypostyle hall. At the northern end there are three dedicated respectively to Horus, Isis and Osiris (working right to left) – this is the triad to which the whole temple is dedicated. Which leads to an oddity in the texts on the walls: Seti has chosen to have his name misspelt throughout the temple – instead of using the Set animal hieroglyph in Seti he’s used another one that sounds similar. The god Set is Osiris’s enemy in many of the legends associated with him – an embodiment of chaos rather than order – and so it was felt discourteous to depict his sacred animal in a temple dedicated to Osiris. 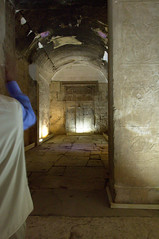 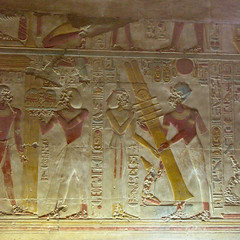 Shrine with False Door at back (left), Raising of the Djed Pillar Relief(right)

The central shrine is dedicated to Amun-Re, as the most important god of the Egyptian pantheon. And then to the south there are another three shrines – this time for Ra-Horakhty, Ptah and the deified Seti I. All seven shrines are finely decorated – and there’s a lot of colour visible on some of them (the Osiris one in particular), but some were never painted. The scenes depict the sorts of rituals that took place within the shrines (except in the shrine to Seti I which depicts his Heb-Sed festival, coronation etc). These rituals included the Pharaoh making offerings to the barque and the statue of the god(dess) of the shrine and dressing the statue in fine linen. Six of the seven shrines have false doors at the back of the shrine, and the Osiris shrine has an actual door at this point. This leads through to a suite of rooms – 2 reasonable size chambers and 6 small shrines (3 at either end). The largest of the rooms, labelled Osiris Hall on the plan above, is very finely decorated. This includes a sequence of images depicting the Pharaoh and Isis raising a Djed pillar and dressing it in fine linen. It’s a shame all of these images have been so damaged by people chipping away the faces, feet and hands. 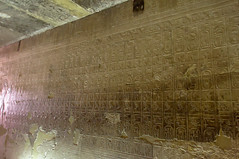 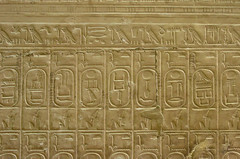 After looking at the Osiris Hall and associated rooms we came back out of the Osiris Shrine and moved on to the Hall of Ancestors (or Corridor of Lists). This is a relatively narrow corridor that has one of the most famous reliefs in the temple stretching down one wall – a list of the Pharaohs preceding Seti I and Ramesses II as rulers of Egypt. This is obviously a bit of a cherry picked list – it skips Pharaohs who were unorthodox in some fashion (e.g. were associated with the Amarna era, or were female). It is effectively setting forth the legitimacy of Seti I’s claim to the throne by positioning him & his son as the last in a list of rulers. 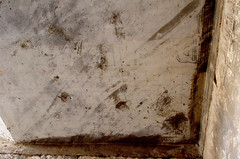 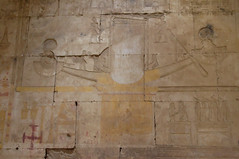 Next we met up with the Inspector for the region that includes this temple, who let us into a couple of the rooms that were locked up. The first of these was a room that had been used for storage of temple equipment (labelled Hall of Barks on the plan) – the walls here were decorated with the contents the room would once have held. In this room Medhat particularly pointed out a corner with a staircase where the decoration had never been finished – you can still see the gridlines in red used to compose the scene and the black outlines of the design. I was amused to see even the stars are systematically laid out on a grid (tho not especially surprised, Egyptian art is full of order). 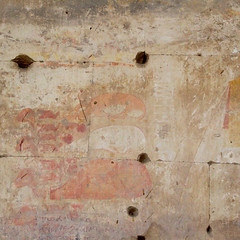 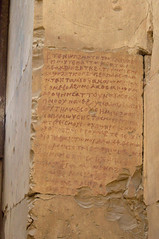 We were also shown the area marked on the plan as the Butchers’ Hall. This was a partially unroofed room that was dominated by pillars and three large basins. During the Christian era in Egypt this room was re-purposed as a Coptic shrine and so there were elements of both religions visible in the decoration & layout. Originally this was the room where animal offerings were slaughtered and prepared to be offered to the gods of the temple – hence the name of the hall. The original reliefs reflect this – they contain several scenes of (dead) animals trussed up and being carved into joints. The large basins are part of the Coptic use of the room – it was a place where worshippers/pilgrims came to bathe in the holy waters and be healed. There are several coptic inscriptions round the room, which I believe detail the miraculous healing power of the waters. 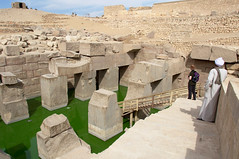 That completed our tour of the temple, and we were then set free to photograph for a while before moving on to the Ramesses II temple (which I’ll talk about in another post). This was also the time when we could look at the Osireion behind the temple, but J and I got caught up in looking round the temple and ran out of time. We did have a brief look, so I have a couple of photos. The Osireion is a is a faux tomb – part a centotaph for Seti I and part a burial place for Osiris. Once it was thought to be more ancient than the temple, but now it’s believed to’ve been started by Seti I and finished by Merenptah. The groundwater has risen since it was built and now it’s flooded all year round. 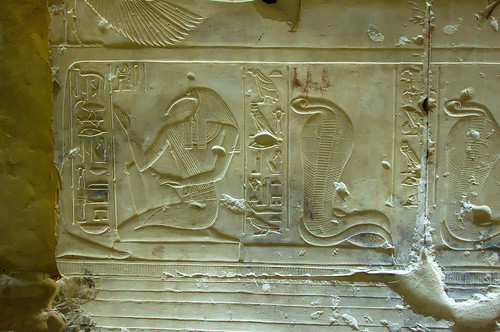