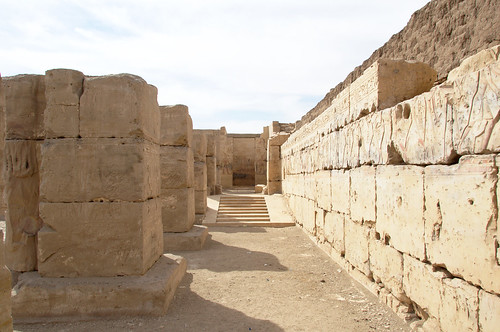 As well as completing his father’s much larger & more famous temple at Abydos Ramesses II also built a temple of his own. It’s much smaller, and there is less of it still standing, but there was still enough for an interesting visit. In fact, we could’ve spent quite a lot longer there – I managed to only see half the inside of it! My photos are, as always, on flickr – click here for the full set or click on any image (except the plan of the temple which isn’t mine) to see it larger on flickr. 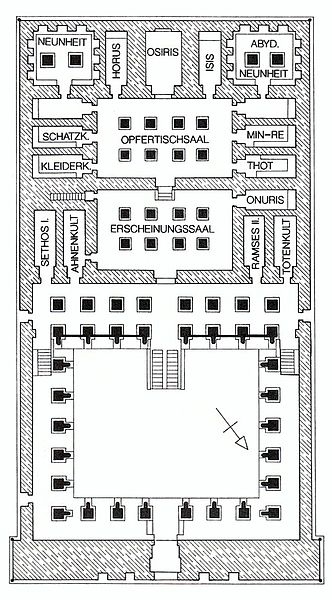 Plan of the Ramesses II Temple at Abydos, from wikimedia

The only plans I found with a license that meant I could use them were labelled in German but I think it’s clear enough what’s what (at least of the bits I’ll talk about) 🙂 We approached the temple from the south east (left hand side of the plan), walking across the very short bit of sand that separates the Seti I temple from this one. The modern ground level is much higher than the ancient one, and the remains of the walls are truncated at head height or thereabouts. So there’s a slightly odd effect as you approach it of suddenly tripping over a buried temple. 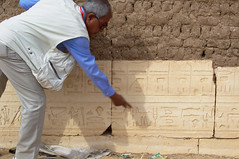 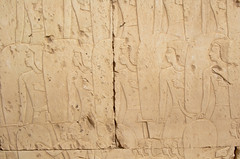 We walked round the outside first to look at the the reliefs there, starting on the left (on the plan) walking round the back and down the right hand side before coming round to the front entrance. The first wall is effectively an instruction set for operation of the temple – it’s a calendar of festivals and the offerings required. The next two walls are scenes depicting the Battle of Kadesh – this is Ramesses favourite theme for temple decoration and it’s returned to again and again on the places he orders to be built. This battle took place in 1274BC between the forces of the Egyptian Empire (lead by Ramesses II) and those of the Hittite Empire (the dominant Mesopotamian culture of the time). It happened at a place called Kadesh, which is near the modern Syria-Lebanon border and is in a strategically important place between the two ancient empires. The outcome is now thought to’ve been a draw but both sides claim in their own records that they won. It was to be an integral part of Ramesses II’s propaganda narrative during his reign – during the battle he’d been lured away from the main force of the Egyptian army and he says in inscriptions that when he was surrounded by his enemies he called upon the god Amun and then singlehandedly defeated his foes and returned triumphantly to the rest of the army. A good story to use to portray oneself as favoured by the gods and the rightful ruler of Egypt, but unlikely to be the objective truth 😉 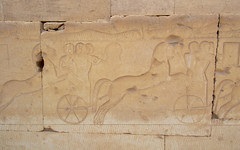 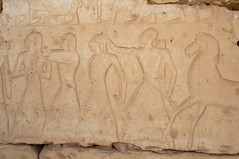 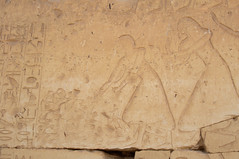 We spent quite a lot of time looking at those reliefs as even in their damaged state there’s a lot of detail to be seen. The soldiers, whether Egyptian or those of the enemy aren’t just a homogeneous mass – they have different faces. There are bodies in the river – a particularly horrifying fate for an Egyptian as drowned people didn’t make it to the afterlife. Scenes of armies marching as well as scenes of battle. Scenes of Egytians taking captives, and counting the slain (via cutting off their right hands and counting those).

At the door of the temple we paused for a bit while it was being unlocked, and Medhat pointed out something in the hieroglyphs at the gate that I wouldn’t’ve spotted myself. There are traces of green in the depressions of some of the large ones – these are marks left by the copper inlay that was once in the hieroglyph. That must’ve been quite a sight to see when new – not just the doors themselves gleaming (being made of gilded wood) but also the hieroglyphs around the doorway catching the light. 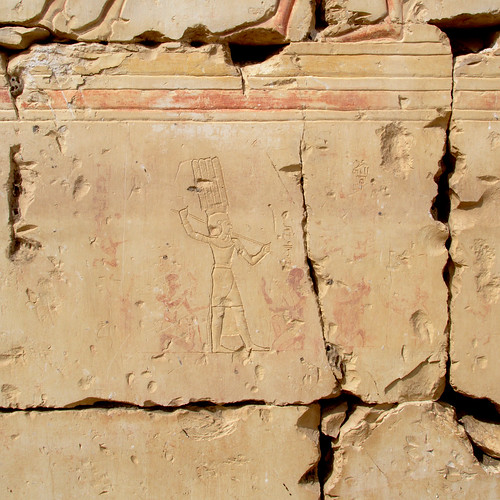 Inside we started to look around the courtyard and here I got completely distracted by a piece of graffiti on the wall so didn’t move on much past the courtyard. I asked Dylan about it and he said it was probably made by a priest at some time while the temple was in operation. Clearly it had been made by someone who knew something of both the techniques and styles of temple reliefs. It was blocked out in red ink to get the layout right, a standing figure surrounded by 2 (or 3?) kneeling figures adoring him. And he’d started to carve the scene – the main figure and some of the hieroglyphs were done, but not all. Quite good work, and it must’ve taken some time to get as far as he did – generally I think of graffiti as scribbled words, but this was of a rather different calibre. 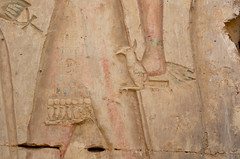 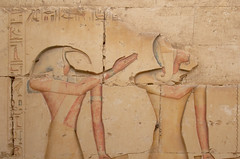 As I said, I didn’t look much round the rest of the interior – something for another visit 🙂 I did have time to take a handful of photos, tho. My impressions are mostly of how much paint there was left, despite the large scale damage to the walls the bits that remained were in pretty good nick. 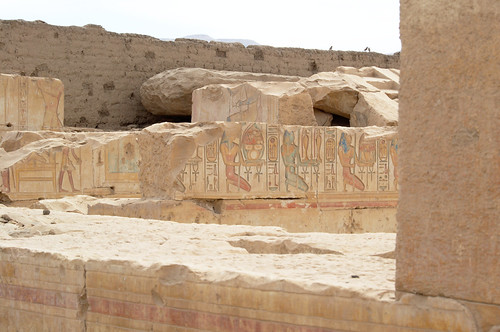