Egypt Holiday 2014: Walk from the Valley of the Kings to Deir el Medina 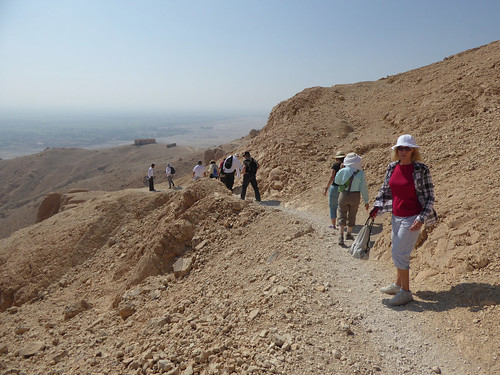 Walking over the Mountain

After visiting the Valley of the Kings (post) we walked over the mountain to Deir el Medina. I didn’t take my camera with me as I (rightly) thought it would make the walk more difficult if I had to manage to keep the camera safe as well. J took his camera tho, and the pictures in this post and on flickr are his. 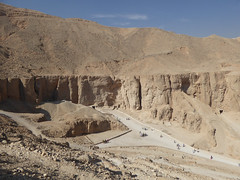 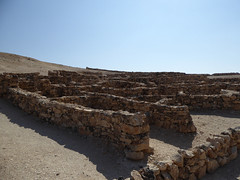 View of the Valley of the Kings (left), Buildings at top of Valley (right)

This walk would be how the workers who dug and decorated the tombs in the Valley got to and from work. There’s some disagreement as to whether they commuted every day or whether they overnighted at the “security post” buildings at the top of the Valley. While we were there Dylan said he didn’t think they slept there, but later on when we visited Deir el Medina Medhat said that was what happened. Whether or not they slept there, it was a stopping point where they were prevented from removing the (expensive) tools of their trade from the Valley. Perhaps not with much success, as they did decorate their own tombs in fine style! 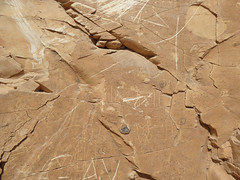 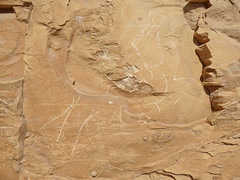 There was also a lot of (ancient) graffiti at that point in the walk – which I don’t seem to’ve gone to have a look at, and I’m not sure why not. I’m writing this 8 months later so if there was a reason I’ve forgotten, perhaps I was just admiring the views after scrambling up the steep path to get up there! J took some photos though. I do know that it’s been catalogued and studied, which is what the numbers on them are referring to. Other people looked over the steeper edges to catch a glimpse of Hatshepsut’s temple at Deir el Bahri, however I stayed well back! 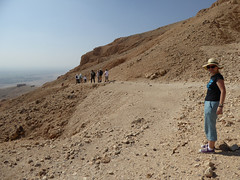 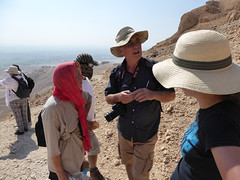 Me not at the edge (left), Geology lesson (right)

Part way across from the security post to Deir el Medina Eileen asked John (the geologist) about some of the rocks, and we had an impromptu geology lesson. I have the piece of rock that sparked the initial question on my desk (as an ornament, there are pebbles from Kefalonia next to me too, I tend to bring back stones from places I visit). It looks a bit like a sandwich, with limestone outer edges enclosing a layer of chert (also known as flint when found in chalk). Chert is a silica rich rock and when found in limestone it derives from the structural elements of organisms like sea sponges. When they died and sank into the mud at the bottom of the sea the organic stuff rotted away but the little bits of silica remained. As the mud turned into limestone the silica was chemically incompatible with it, and so instead of being dispersed evenly through the rock it ended up clumped together in sheets or globules. 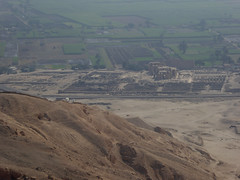 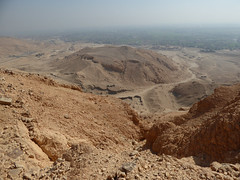