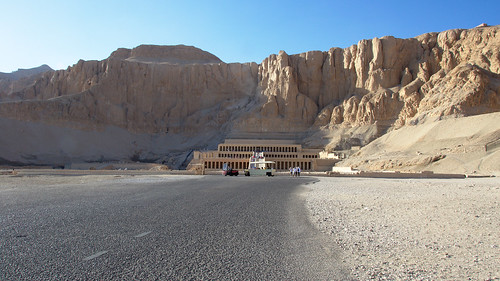 Hatshepsut’s Memorial Temple at Deir el Bahri is one of the sites everyone goes to on the West Bank at Luxor. Rightly so, as it’s a very impressive temple (although I perhaps don’t rate it as highly as Kent Weeks does in his Luxor guidebook which waxes lyrical about it being the most beautiful temple). It’s also unusual in immediate appearance, as it’s very cleverly designed to look from a distance as if it’s organically formed within the cliff face. The thought that stops me categorising it as “most beautiful” is that from a distance it also is reminiscent of fascist architectural style. When initially discovered by Westerners it was in a very ruined state, with a Coptic monastery built in & on the top level of the temple from which the site takes its name. As part of the restoration and excavation of the temple this monastery was removed because only the antiquities were considered interesting.

My photos from this site are, as usual, on flickr – click here for the full set or on any individual photo to go to the larger version on flickr. 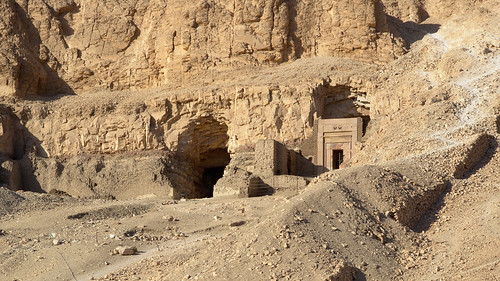 We started our visit by walking from the coach park to the temple – there’s a little road train to take tourists to the temple which we’d used the last time we visited (in 2009) as the timing was quite tight that time. Walking is a much better option, however, as you get good views of the temple. And a chance to look up at the cliff to the north which has several tombs in it (tho I don’t think those are open to the public). There were noticeably more tourists at this site than there had been anywhere else we’d visited, and also more signs of archaeological activity. There were several people working above the temple – I’m not sure if they were excavating or just clearing debris (or both, of course!). There was also someone doing some epigraphic work in one of the colonnades, tracing a relief onto a transparency.

Medhat wasn’t giving us a tour here, instead we were sent off to explore by ourselves. The temple is on three levels, which look vertically aligned from a distance but up close it’s clear that there are three courtyards arranged like giant steps in a staircase, each with a colonnade at the back in two parts flanking a ramp leading up to the next level. J and I mostly looked at the reliefs on the middle colonnade, plus the two chapels on that level. Then a little time on the top level before we had to head back to the coaches. 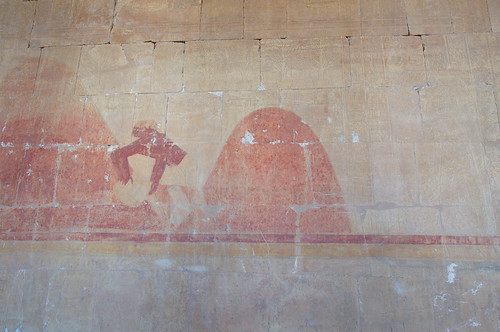 We started by looking at the famous reliefs of the expedition that Hatshepsut sent to Punt, which are in the southern part of the middle colonnade. Punt is somewhere to the south of Egypt, but exactly where is uncertain. Previously it was thought to be on the Arabian Peninsula, but modern scholars think it was on the east coast of Africa around about where modern Somalia or Eritrea are. This is due in part to the flora & fauna depicted in these reliefs. The reliefs depict both the land of Punt (and the people who live in it and rule over it) and the goods that the expedition brought back with them. The most famous part of the scene is probably the Queen of Punt – a very large woman – and the original piece of stone showing her is in the Cairo Museum with just a replica at Deir el Bahri. The cargo they brought back included vast quantities of frankincense and gold. One of the scenes shows a large set of scales with three oxen on one pan and a large quantity of gold rings on the other! The reliefs are pretty damaged now and it can be hard to pick out the details, so we spent quite a while looking at these to see what we could pick out. I’ve played around a lot with the contrast on my photos to try & bring out the details a bit more clearly. 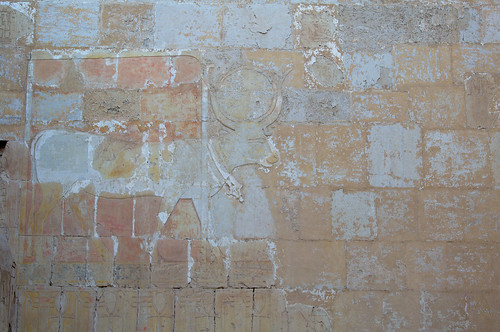 Next we moved on to the Hathor temple to the south of the colonnade which has Hathor-headed columns as well as several fine depictions of Hathor as a cow on the walls. From there we also had a good view of the remains of the older temple that Hatshepshut built hers next to. It dates from the Middle Kingdom, and is the Mortuary Temple of Montuhotep II. Linking herself in this way with this Pharaoh who was responsible for re-uniting Egypt at the start of the Middle Kingdom was a good PR move for Hatshepsut. 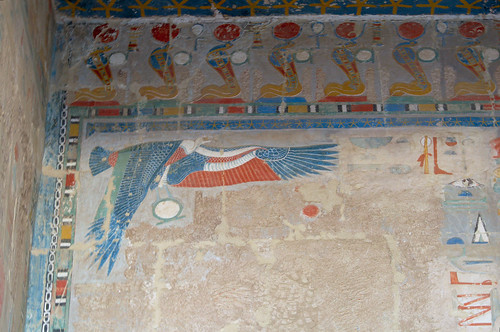 We didn’t really look very long at the northern part of the middle colonnade, instead we looked at the Anubis temple at the northern end of it. It’s particularly interesting as it is unusual to find a temple to Anubis. The decoration is in good condition and there is a lot of colour remaining on it. The northern part of the colonnade has scenes of Hatshepsut’s divine birth – the first known examples of this sort of scene. Later Pharaohs like Amenhotep III would also claim divine paternity, on reliefs in Luxor Temple for instance (post). 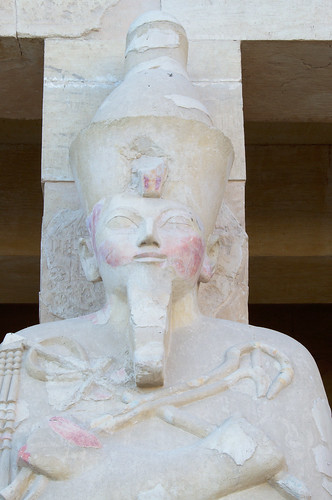 We then made our way up to the top level of the temple. There are several fine statues of Hatshepsut as Osiris on the colonnade at this level, as well as a terrace behind them with some pillars still standing in a ruined state. There are side chapels off this terrace, and I think J got to have a look in one of them but I mostly looked at the views back towards the Nile which were spectacular. And by this point we were running out of time, so we slowly made our way back down to the coach – we didn’t really have a chance to look at any of the bits we’d missed out on the way up tho. 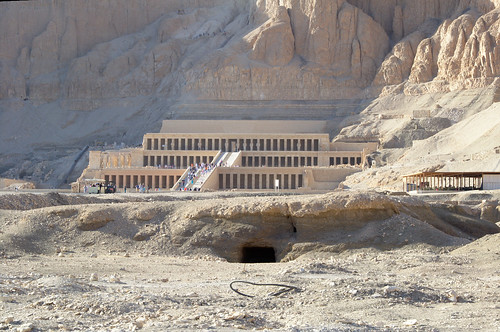