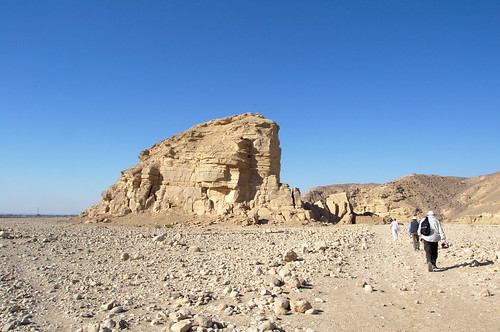 El Kab is a couple of hours drive south of Luxor and was the furthest south we went on this trip. There are several different Ancient Egyptian sites at or near el Kab, and we visited four of them, covering a sweep of history from predynastic (and perhaps before) through to the Ptolemaic era. The site is pretty big – we were driven through it to visit the various bits and it didn’t feel silly getting back on the coach rather than walking. This is also the area of Egypt where the predynastic sites of Nekheb and Nekhen are; Renee Friedman gave a talk to the EEG about Nekhen last November just before we went on holiday. I think we saw the enclosure wall for Nekheb, but nothing inside.

My photos for this site are, as usual, on flickr – click here for the full set or on any photo to go to its flickr page. 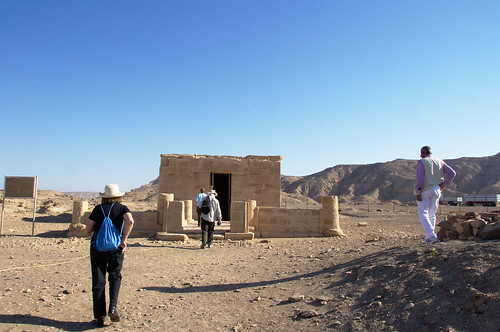 At the far end of the site was a small 18th Dynasty temple dedicated to the goddess Nekhbet. Nekhbet isn’t just the local goddess of the area (which she was from predynastic times) but also evolved into the patron goddess of Upper Egypt. It was a rather unprepossessing temple from the outside, at first glance rather small and plain. Inside, however, seemed rather bigger and a lot of colour remained on the decoration. There was also a lot of graffiti on the walls (leaving one’s mark was a bit of a theme for this day). The bulk of the graffiti was clumsily carved by Victorian era tourists, but there was also some older stuff in hieratic and hieroglyphs. 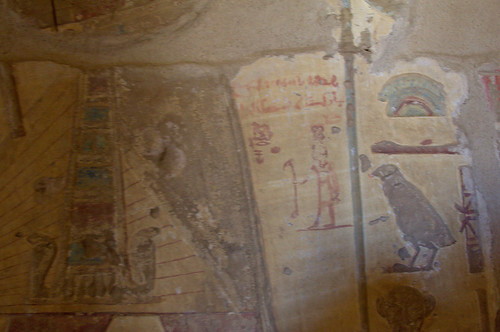 Once we’d spent some time looking at the inside we went back out and had a proper look at the outside. It wasn’t as dull as first glance had suggested – whilst there wasn’t much official decoration on the walls the priests etc had left their mark in other ways. On the floor around the temple were game boards carved into the flagstones. There were also carvings of outlines of feet, I think the purpose of these is so that the carver is eternally standing next to the temple. 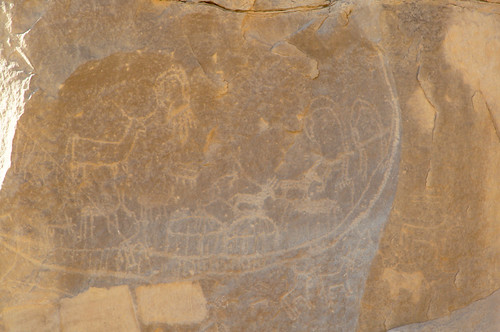 Vulture Rock was my favourite part of this site. It’s a rocky outcrop that looks a bit like a (headless) Egyptian vulture hieroglyph and it is covered in carvings. There’s another large rocky outcrop nearby that is also covered on every reachable surface by carvings. These range from predynastic or prehistoric carvings through to the Old Kingdom era. The older stuff includes a large picture of a boat with enclosures & animals on it, as well as numerous animals and human figures (some of whom have their arms curled over their heads like you see on predynastic pottery). 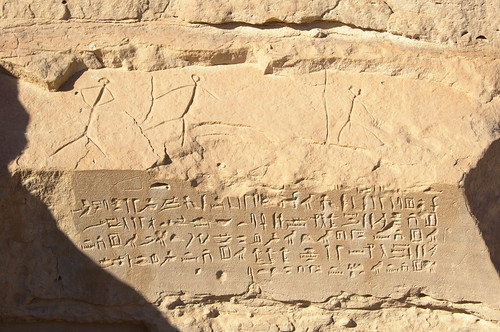 The more recent (5th & 6th Dynasty) carvings were more elaborate and more wordy. There were even raised relief inscriptions, and offering stelae complete with the vignette of people making offerings to a god. This wasn’t just graffiti, not the equivalent of “Kilroy was here” that we saw in many of the temples and tombs we’d visited on the trip. The later inscriptions here looked like they were done by someone who had a decent idea of what they were doing and some sort of official sanction. 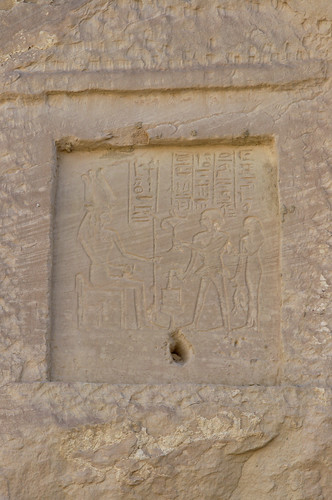 For a site I found so fascinating I don’t have much to say about it. I think what appealed the most was the sense of continuity. This had clearly been a significant site for centuries, if not millennia. And even though there was a clear difference between the animals etc carved by the earliest people and the detailed inscriptions of the later people they were still linked by a common desire to leave a permanent memorial of their visit to the site. And even tho it wasn’t graffiti like the Victorian stuff in the temple we’d just visited, there is still that sense of continuity coming up so close to our own time (and if there weren’t so many guardians etc around I’m sure we’d find more modern graffiti in these sites too). It seems to be a part of being human, the urge to make some mark that’ll outlast you and show that you existed too. 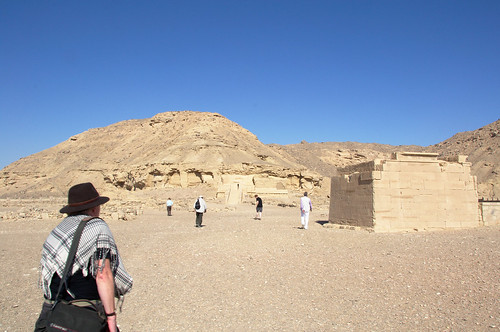 The next part of the site we visited was a small temple dating to Ptolemaic times which was carved into the hillside. There was also a nearby shrine or chapel which was a bit older, from Ramesses II’s time. Outside the temple there was a small enclosure wall, which had several examples of graffiti on it continuing my theme of the day. These were fairly crude, which stood out particularly after seeing the well done carvings on Vulture Rock which were so much older. 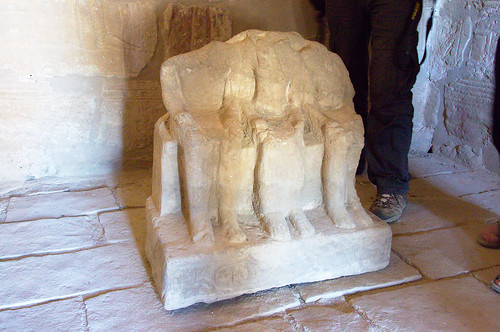 The nearby chapel had the remains of a triad statue in the centre of the room. Despite no heads on the figures, and only a very eroded inscription, we worked out that the central figure was likely to be the vulture goddess Nekhbet. 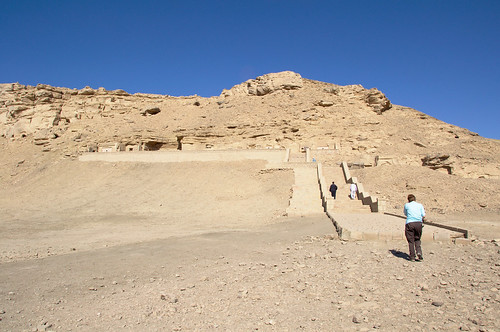 We finished at el Kab by looking at four tombs of 18th Dynasty Nobles. The key one here is the tomb of Ahmose, son of Ibana. He had been involved in the wars to reunify Egypt at the end of the 17th Dynasty. Clearly he was proud of this, and on one of the walls of his tomb is a lengthy hieroglyphic biographical text which includes many details of the conflict. In fact this is where a lot of our knowledge of this conflict comes from. The other three tombs were those of Paheri, Setau and Renni. And I’m afraid they’ve all blurred together in my head somewhat. I remember that the decoration wasn’t in terribly good nick, but you could see from what remained that it had once been fine work. And of course there was Victorian graffiti in the tombs. In fact in retrospect I’m mildly surprised that there wasn’t any Victorian names at Vulture Rock – perhaps they just never visited the site. 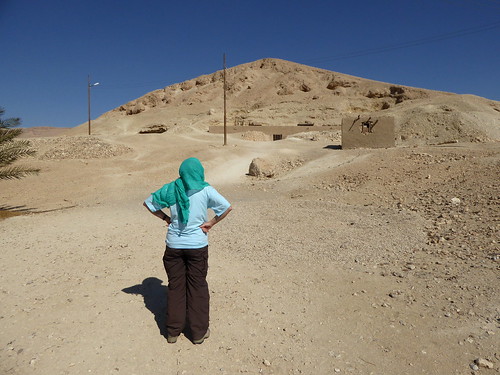 Mo’alla is not part of el Kab, in fact it’s more than halfway back to Luxor – but I’m appending Ankhtifi’s tomb onto this post as I have no photos from there (it being a tomb) and not that much to say. This is a tomb that stands out from most of the others we visited – it is from the First Intermediate Period, so older than most of the ones that we visited during the trip. Ankhtifi was Governor of the local area, and due to the breakdown of central government at the time he was pretty much a minor King. It felt like a different layout, a single larger room with many pillars in it. And the art style was noticeably different to the New Kingdom tombs we’d just looked at. I particularly liked the detail in the hunting & fishing scenes. It was also particularly interesting to me as we’d heard a talk by Glenn Godenhoe at the EEG a couple of years ago where he talked about his work on this tomb. There are inscriptions on the tomb walls which paint a picture of the lawless time that Egypt was going through – but as Godenhoe pointed out this was more about showing how awesome Ankhtifi was than about what Egypt was actually like at the time.