At the beginning of June Sergio Alarcón Robledo came to talk to us at the Essex Egyptology Group about the work he’s doing as part of the Polish-Egyptian Mission at Hatshepsut’s temple at Deir el Bahri. His talk was in two parts – first the theoretical underpinnings, then the practical work he’s been doing at the site. And after the formal talk was over he also showed us some unpublished imagery he’s been making of various tombs.

Robledo started by zooming out to a very wide-angle view of the subject – he showed us a picture of a pre-dynastic burial, of a pyramid, of the temple of Montuhotep II (built at Deir el Bahri before Hatshepsut’s one), of a tomb in the Valley of the Kings. The unifying theme is that they are all ways of connecting the deceased with the cosmos. At first they just put the body in the right position facing in the right direction, but over time the requirements to enter the afterlife became more elaborate. Mummification became necessary, coffins became necessary, tombs became necessary and so on & so forth. But there is always the same underlying function of connecting the deceased person with the cosmos. And it’s important to keep this in mind when thinking about the form and function of Hatshepsut’s temple – it is always intended to connect her with the cosmos.

Why is Hatshepsut’s temple important to understand? It’s partly that she was the first Pharaoh that we have evidence for the construction of this sort of temple (called a Temple of Millions of Years). So understanding her temple helps with understanding the later ones (which are presumably modifications & elaborations of this one).

Robledo next told us about who Hatshepsut was and her historical context. The temple was built shortly after the end of the Second Intermediate Period, in the early New Kingdom period. Kamose, the last Pharaoh of the 17th Dynasty, had begun the reunification of Egypt from his power base in Thebes. His successor Ahmose (now thought to be Kamose’s nephew, rather than younger brother) completed the job and is considered to’ve founded the 18th Dynasty. He was succeeded by his son, Amenhotep I, who in turn was succeeded by an unrelated man called Tutmosis I who married Amenhotep I’s sister in order to legitimise his rule. His son by that wife, Tutmosis II, succeeded him and was married to his half-sister Hatshepsut, a daughter of Tutmosis I by a different wife. Once Tutmosis II died he was succeeded by his son Tutmosis III, who was Hatshepsut’s step-son. As Tutmosis III was an infant when his father died Hatshepsut became his regent, and later ruled in her own right as Pharaoh and Tutmosis III only truly inherited power after she died. The important point to take away from this brief genealogy is that Hatshepsut did not have royal blood – it’s not just being a woman that puts her legitimacy on shaky ground.

So Hatshepsut needs to assert her power & her legitimacy, and her choice of site for her temple is strongly influenced by these needs. Robledo talked a bit about the surrounding area and what large scale buildings were there before Hatshepsut’s temple was built – by & large what one thinks of as the features of the area were built later. When she started her building programme there was Montuhotep II’s temple, built some 500 or so years earlier, and some buildings at the sites of Karnak and at Medinet Habu which were also from the Middle Kingdom. So Hatshepsut is starting the first monumental building programme in the area for some time – showing herself to be as true a Pharaoh as the great Pharaohs of old. And she is deliberately putting her temple next to that of Montuhotep II to associate herself with him – he was the reunifier of Egypt at the start of the Middle Kingdom.

Having talked about why Hatshepsut would want a temple, and why she put it where she did, Robledo next discussed the temple itself in a bit more detail. Foundation deposits are a rich source of evidence for archaeologists investigating Ancient Egyptian buildings. These were buried before a monumental building was constructed and contain lots of objects some of which have inscriptions giving the Pharaoh responsible for the building etc (see below for a photo I took in the Met Museum in 2015 of a reconstructed foundation deposit from Hatshepsut’s temple). It’s not actually known what the precise purpose of these deposits was from an Ancient Egyptian perspective – presumably they had some sort of ritual significance. Generally they’re buried at particular places under a building plan – like entrances or corners. One thing that’s interesting about Hatshepsut’s temple at Deir el Bahri is that the foundation deposits don’t seem to line up with the structures which were built on top of them. So Hatshepsut (or her architect) must’ve changed the design after the project was started. 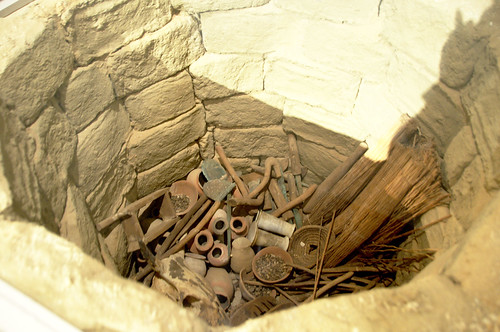 The temple layout is very complex in a religious sense – it’s not just dedicated to the royal cult or to a single god. Instead there chapels within it dedicated to Hatshepsut and to several gods. One possible reason for this is to make it less likely to be destroyed after her death. A temple that was just for her funerary cult could easily be destroyed after her death if her successors decided she was not a legitimate Pharaoh (as indeed happened). But destroying a temple to several important gods would be more difficult to justify theologically. Which would mean that Hatshepsut’s concern for her own legacy would set the template for future Temples of Millions of Years even though those Pharaohs wouldn’t have the same concerns about their legacy.

The non-religious iconographic program of the temple is very much focused on Hatshepsut’s power & legitimacy. Among others it includes scenes detailing her divine origin and birth, and showing the expedition to Punt that she ordered. This is the first temple we know of that included these sorts of scenes (rather than of Pharaoh worshipping deities and so on). One thing that Robledo pointed out specifically is that there’s no actual evidence that this temple is a funerary temple – and in fact there is a theory proposed by Martina Ullman that it is not.

After a break for coffee & cake Robledo moved on to the practical side of his talk. He started by talking about how it feels different excavating at Deir el Bahri than it does excavating at other sites – because there have been 150 years of excavation at the site, and much restoration work as well. So the context of anything that’s excavated is very dubious as it’s very likely to’ve been dug up and moved around in the past. And some parts of the temple that you see are replicas, replacing the real objects that are in museums around the world.

The first phase of discovery of the site, in the 18th & early 19th Centuries CE, was exploration by Western travellers and Robledo showed us some drawings from c.1840 CE which include views of the Coptic monastery which had been built on top of the temple. These are now some of our only records of that structure as it was destroyed during the excavation of the temple. The first archaeological excavations were carried out in the 1850s & 1860s by August Mariette, and during the time much of the structure was uncovered. Édouard Naville carried out work in the 1890s and 1900s funded by the Egypt Exploration Fund (including destroying the Coptic monastery), and after him Herbert Winlock excavated in the 1910s & 1920s funded by the Metropolitan Museum of Art. Robledo showed us photos from these latter two excavations – scenes of hundreds of workers working simultaneously, as many as 800 were employed on the digs. This vast army of workers would be difficult to control & direct carefully, and in any event the archaeologists leading the excavations cared less about the sorts of details that modern archaeology is built upon. This means that a lot of information about the temple, its use, construction and so on, was destroyed in these excavations.

The Polish-Egyptian Mission, of which Robledo is a part, is a very large mission by modern standards – there are over 60 different projects going on at the moment, ranging in size from someone’s PhD thesis to much larger multi-person projects. Robledo is working on the Upper Courtyard at the temple, and he is interested in what the original layout was and how it’s changed over time. There are various ideas about how many columns filled the courtyard – completely full, 2 or 3 rows around the edges, with varying ideas about spacing which may or may not’ve been symmetrical. In most other archaeological sites you would carefully excavate the floor of the courtyard looking for evidence of foundations. However at Deir el Bahri the site has been dug over & reconstructed so much that this isn’t possible – foundations have been disturbed or columns/foundations have been added by archaeologists to recreate their own preferred theory.

So Robledo is having to approach the problem obliquely. One approach he’s using is to investigate a later Ptolemaic era structure built using elements of Hatshepsut’s original courtyard. This structure, a portico, crosses the original rows of columns in the courtyard and it had 3 columns on each side. One possibility is that there were three rows of columns originally and the the Ptolemaic era architects put a roof across 3 pairs of existing columns. Alternatively if there were 2 rows of columns in the original courtyard then the Ptolemaic era architects would’ve needed to add an outer pair when building their portico. So Robledo has been trying to find evidence for when the outer columns were built. So far everything is inconclusive – for instance he’s found a piece of pottery at one of the foundations, but it is of a style that could be of any time from Hatshepsut’s time onward so doesn’t rule out either possibility.

Another approach he’s employing is to use modern imaging technology to help virtually rebuild some of the architrave from the courtyard. This is in over 700 pieces, and he is creating a virtual 3D model of each piece. In future he’ll be able to put it together like a jigsaw puzzle and look at where the architrave sockets were.

After the formal part of his talk (and a question & answer session) Robledo showed us some of the other things he’s working on. One of his skills is the making of virtual 3D models and so he works with various other teams generating models for them. These are particularly useful in cases where it isn’t possible to conserve the objects themselves – like termite eaten coffins which will disintegrate as soon as any attempt is made to move them. All the stuff he showed us at this point is unpublished which was exciting to see – for instance he showed us some images from new tombs that have recently been discovered in Aswan.

One of the things I found particularly interesting about this talk is that there’s still new stuff to discover at a site like Hatshepsut’s temple at Deir el Bahri which has been dug over by so many archaeologists over such a long period of time. And the insights into what the thinking was behind Hatshepsut’s choice of site and design.