In July Anna Garnett came to talk to us at the Essex Egyptology Group about pottery from Amarna. Garnett has recently become curator at the Petrie Museum and is also working on analysing the pottery that has been found at the Amarna Stone Village, which is the work she was telling us about during the first part of the meeting.

The Stone Village is a village near the main city of Amarna that has been excavated in modern times between 2005 & 2010. The bulk of the site has been published in 2012 and Garnett is adding to this by analysing the ceramics that have been found (there was a ceramicist with the original excavation but he left before the work was completed and Garnett joined the team in 2015). On the surface the site is formed of stone boulders in marl clay, hence the name, and was identified as being of interest in the 1970s by Barry Kemp (and sadly looted between then and the time of excavation).

The site is an area of dense settlement, with evidence that people lived there (as opposed to just worked there). The buildings were made of stone, and probably roofed with some kind of natural material (but it’s not known what). They seem to’ve been one storey buildings, with no evidence for staircases (unlike the village at Deir el Medina) and they were not laid out in a regular layout. In general the site appears to’ve been more ephemeral than the comparable village at Deir el Medina or in the other Worker’s Village at Amarna itself – there are no centralised water storage areas, no gardens, no temple or chapels. This is perhaps an indication that they were lower class/status workers than the elite workers in the other two villages.

So who lived there? There’s evidence that these were family dwellings rather than barracks style places. The were domestic items found, including Taweret amulets (which are associated with childbirth). Of the four tombs excavated in the area one contained a child, again indication of families living there. The population was probably between 100 & 150 people, assuming that there were around 5 people per building, this is about half the size of the Worker’s Village. There was a perimeter wall, but not as sturdy as the one at the Worker’s Village. Garnett told us that not all of the site has been excavated as yet because there wasn’t enough time (or money for more time) and although the trenches were spread across the site to give an overview of the area it’s possible that when more can be excavated the ideas about the site will change.

Around the main site of the village there are also peripheral structures, including a possible guard post. It is also surrounded by an ancient road. This is a significant feature in the landscape at about 4m wide although it’s not clear if this was an integral part of the site or not as no archaeology has been done on the roads. It’s possible that they separate parts of the site, or possibly they were used by guards to patrol the site – either to protect or police the people. One of the things that Garnett wants to do with her work is to map the current pottery finds, and then survey the roads herself to see what can be discovered about the function of these roads.

Garnett circled back to the question of who lived in the village. It was perhaps the labourers for more mundane jobs than those done by the ones in the worker’s village. Possibly they were involved in quarrying out the tombs, and one piece of evidence supporting this is the presence of basalt chips in the village. The tombs were carved into fairly soft limestone cliffs, and this work would’ve been done with basalt tools – although needing to be shipped in from other places this was still cheaper than using copper tools. Another possibility is that the village was involved as a way station in supplying expeditions out to the desert. It is certainly true that the workers were engaged in manual labour – the bodies discovered in the burials at the site all show signs of this type of work.

Another possibility for the function of the village is by comparison with the site at Deir el Medina. At that site as well as the worker’s village and the Valley of the Kings over the mountains there is also another set of structures about halfway between. These have been variously suggested as places the workers rested during the weeks rather than commuting home every day, as storage areas for the expensive materials & tools used in their work, and as check points to make sure they weren’t taking the expensive items home for unauthorised use. The Stone Village may also have provided bread for the workers at the tombs of Amarna (or expeditions into the desert) as extensive bakeries were found which were excessive for the local population. However there is evidence against this sort of role for the Stone Village – including that there is no physical link, such as a road, between the Amarna Worker’s Village & the Stone Village. There is also evidence that the Stone Village was occupied earlier than other parts of Amarna (including the Worker’s Village), starting from Year 4 of Akhenaten’s reign. And it may also have been abandoned earlier. So perhaps the two villages represent different phases of the construction of the tombs at Amarna.

Garnett now moved on to tell us about the ceramic study of the Stone Village site, which is what she is actually doing. For most excavations the primary question that the pottery remains answer is how old the site is and for how long the site was occupied but at Amarna the dates of the site are securely known – Akhenaten founded the city in Year 5 of his reign, and it was abandoned shortly after his death some 20 or so years later. This means that Garnett is free to concentrate on the other questions that the pottery can answer. Another thing that makes this study particularly interesting is that the site was inhabited entirely by a non-elite population.

The questions Garnett is interested in answering are about what the pottery can tell us about the use of the space at the Stone Village – what activities went on there, and can anything be discovered about what particular spaces were for. She is also trying to see if the sorts of people & activities at the site can be narrowed down any further from the current rather broad theories. The pottery can also be used to compare this site with other sites – how does it fit into the broader picture at Amarna as a whole? How does it compare to the Worker’s Village? And how does it compare to other sites across Egypt at this sort of time period?

Garnett is currently working her way through the approximately 3000 pottery fragments that have been excavated at the site, and re-confirming or re-evaluating the original identification. Some of her work so far has to do with the storage of water at the site. She has found evidence of lots of large pointy amphorae, and also of large water storage vessels of a type still used to store & keep water cool today in Egypt. As with the Worker’s Village there is no well or water source at the Stone Village, so water needed to be brought in the amphorae to the site. However at the Worker’s Village there is an obvious place where the remains of water storage vessels are found – so there was a centralised water distribution system. In the Stone Village the storage vessels are smaller and more widely distributed across the site. Perhaps this means that every household had its own storage arrangements. It may also be further evidence that the site was primarily used to supply people travelling into the desert.

90% of the pottery found at the Stone Village is made of Nile clay – abundant, relatively local, and cheap. Garnett described much of it as being the ancient equivalent of paper plates, not intended to last long term. However this also means that 10% was of better quality clay which was sourced in the oases. These vessels may’ve contained wine – but it’s not clear if the inhabitants of the Stone Village were drinking the wine or if they were given the vessels to use after other people were done with them. There are also some fragments of blue painted ware, which is a high status and good quality ceramic and very rare in the Stone Village.

To conclude this part of her talk Garnett reminded us that this is very much a work in progress. She’s now almost completely catalogued and categorised the pottery, and will be spending the next 12-18 months analysing the data she has before writing it up for publication.

After a break for coffee and cake Garnett moved on to the second (related) talk of the afternoon. Instead of looking at her work on a particular site, this time she was giving us an overview of her favourite type of pottery: Amarna Blue. This is one of the rarer types of pottery found from Ancient Egypt – not cheap & disposable, instead a fine ware. There are various names for this pottery type – Amarna Blue, Blue Painted Pottery or Malkata Ware. It is characteristic of the New Kingdom period (1550-1069 BCE), primarily during the 18th Dynasty, and evidence for the emergence of highly decorated luxury goods during this affluent period (for the elites). The blue colour is achieved using the chemical CoAl2O4 which is generally painted on before firing. This material is not easy to get hold of – it’s only found & mined in either the Dakhla Oasis or in the Sinai peninsula – making it a costly way to decorate your pots. The pots themselves were made in Amarna, Malkata (next to Deir el Medina) and Gurob (in the Faiyum) all of which are near palaces & places that the elites live. 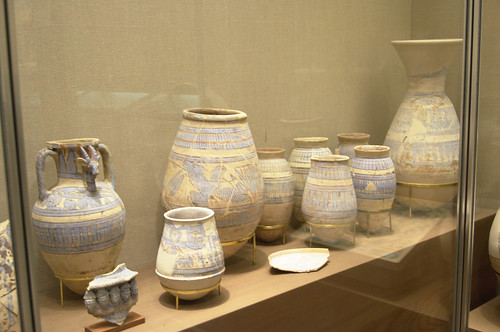 Garnett showed us several examples of this type of pottery. The decoration often features floral themes, and other themes from nature. The designs aren’t just painted on, sometimes there are moulded elements like the gazelle head modelled on one of the jars in the photo above (taken by me in the NY Met a couple of years ago). Other common decoration elements can include moulded Hathor heads and lotus flowers. One interesting frequent motif is a flowered garland painted around the neck of the jar, and it seems that these were painted representations of something that was done in reality. Tomb reliefs that show jars (like those from Nebamun’s tomb that are on display in the British Museum) show wine jars with real garlands of flowers round them.

Sometimes the jars are labelled with their contents, for instance there are examples in the British Museum of wine vessels which say not just that they contained wine but where the wine was made. This doesn’t just tell us the surface information (the content of the jar) it also tells us something about the trade networks across the country at the time. These jars from a tomb in one area of Egypt contained wine from another area, in a pot made in yet another area decorated with expensive pigments from either Dakhla Oasis or the Sinai.

I don’t think I’ve done this half of Garnett’s talk justice – it was mostly filled with Garnett showing us pictures of pottery and enthusiastically explaining what was interesting about this particular one, which is awfully hard to summarise! I’m often not very inspired by pottery, but Garnett did a fantastic job of conveying her own interest & enthusiasm and bringing the subject to life.