In December Meghan Strong, a PhD student (about to submit her thesis!) at Cambridge, came to talk to us at the Essex Egyptology Group about the use of artificial light in Ancient Egyptian ritual. Light in ritual is something we’re still familiar with in the modern world – think of Divali, Advent (or the Easter Vigil service), Hannukah and many other examples. Strong’s argument is that the Ancient Egyptians were no different from modern people in this respect.

She began by giving us context for both artificial light in pre-history & in the ancient world, and for the study of light in an archaeological context. Fire is the basis of ancient artificial light. The first evidence of its use as a tool is around 1 million years ago, and Strong said that it can be argued that this is part of what makes us human (as distinct from animals). The first evidence of lamps dates to around 15,000 BCE and the earliest example has been found in the Lascaux Caves (which are famous for the pre-historic paintings on the walls). The lamp has been specifically carved to serve as a light source – most obviously to light the way into the cave, to let the artist see to paint. But it also creates the environment which you’re supposed to see the paintings in – the dim flickering light source makes the paintings seem to move.

Strong told us that the study of light in an archaeological context is called Lyknology. It has generally focused on Greek & Roman lamps, with Ancient Egyptian lamps only featuring from the Roman period. While there are many studies of how the Ancient Egyptians used natural light (for instance in the design of the temple at Abu Simbel) there are only 10 papers on artificial light use & they are quite short. (In fact the whole subject seems somewhat obscure – Google & Wikipedia let me down when I was trying to check if I had the terminology correct, so apologies if I’ve got it wrong!) Even Petrie didn’t publish on Pharaonic Egyptian lamps – he wrote about those in later Ancient Egyptian history, and about lamps from Palestine & the Levant.

One of the reasons that Ancient Egyptian lamps are overlooked is that they don’t look like one expects an ancient lamp to look – they didn’t use oil wick lamps that burnt olive oil as in Greece or Rome, as they didn’t have a ready source of olives for fuel. The fuel sources they did have were vegetable oils (which produce a lot of smoke) and animal fats. The latter are smelly when being made but odourless and smokeless when burnt so were the preferred fuel type.

The less familiar shapes mean that not only is there little archaeological evidence of lamps but it can also be hard to interpret. So Strong has needed to combine the evidence from archaeology, texts, iconography plus some experimental archaeology. One of the things that she has been doing as part of her PhD is constructing a typology of lamp types used in Ancient Egypt from 3000 BCE to 400 BCE and she has identified four groups. The first of these are spouted vessel lamps, and she talked about a 4000 BCE example that has burnt fat residue still in it – however this vessel shape can also be used for other purposes (like libation offerings), so it’s hard to tell the purpose of any given archaeological object. The second vessel type she discussed was open vessel lamps, one very ornate example of which comes from Tutankhamun’s tomb but other more practical ones have also been found at Deir el Medina. The last groups were what she calls “Wick on Stick” devices and “Wick in Stick” devices. An example of the former is also found in Tutankhamun’s tomb and would be fat soaked linen wrapped around a stick. The example she showed us of the latter was a magic brick (which would’ve placed in someone’s tomb).

Having talked a bit about what sorts of lamps there were Strong moved on to talk about how they might’ve been used. A very important piece of evidence comes from a 12th Dynasty tomb of Hepdjefa, which is at Asyut. There is a text inside the tomb which details how two workers are supposed to glorify his tomb with gmḥt at New Year’s Eve. From context these are lamps, this text is the only one that gives them a name although there are other texts that reference the same festival. They were to be obtained from the Keeper of the Wardrobe, which perhaps means that they were made of linen. They must be portable – the workers are instructed to carry them at night. And they are to be used to light a tkꜣ – from context this must be another type of light source. 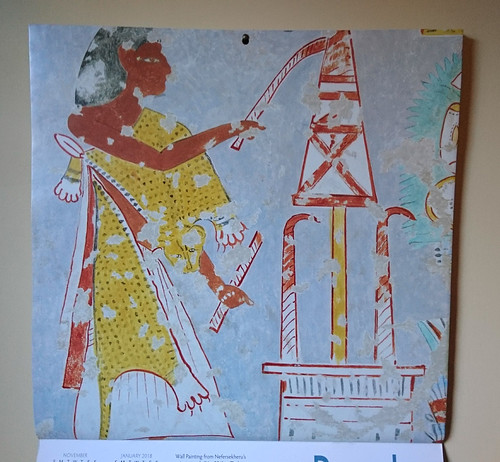 Strong believes she has identified these light sources in reliefs from a variety of sources (such as one from the tomb of Nefersekheru in the photo above – which J took of our calendar in December). The ones that look like tapers in the man’s hands and on the structure are the gmḥt and the larger structure that he’s lighting must be the tkꜣ. Strong argues that the depictions of the gmḥt often show them lit – her experiments have shown that the lamp bends as it burns, and then the red paint at the top represents the burning & light. The experimental archaeology has also shown that the lights handle well – they produce a lot of light, they don’t drip as they burn (much better than a candle!) and a 19cm wick will last for about 45 minutes. All in all they seem to be nice to use in a procession.

Having covered the what and the how, Strong next discussed why the Egyptians were using light & what purpose it was playing in their rituals. Her evidence all comes from New Kingdom texts, but as the texts correlate with texts from the Middle Kingdom she thinks that her conclusions probably apply earlier as well as in the New Kingdom. The current state of the literature is that in Ancient Egyptian ritual light is used for protective purposes only, and there are texts that back this up as a use for light (for instance in a funerary context). However Strong’s research shows that this is not the only reason.

In texts that talk about the New Year’s Eve ritual (which is described in Hepdjefa’s tomb) the phrase “light to illuminate the path” shows up frequently and Strong thinks this is key to understanding the role of light in this context – that it facilitates movement (in a ritual sense, not just a pragmatic sense of being able to see one’s feet in procession). In New Kingdom tombs light offerings are represented in scenes in liminal spaces (such as doorways) – again facilitating movement. And they are also painted at places where the natural light will no longer penetrate the tomb space, “illuminating” the path in & out of the tomb. These motifs are particularly seen at Deir el Medina.

Light is also implied to be involved in the rebirth of the deceased in a funerary context. And this ties into the New Year’s Eve ritual as well – as that is a ritual for the birth of a new year. Tying both these concepts together light is also seen as facilitating the movement of the soul between living & dead (in a very similar fashion to the Day of the Dead festival in Mexico).

There is a lot of evidence that artificial light was used in funerals in the New Kingdom, and for the last part of her talk Strong focused on a particular spell from the Book of the Dead (137a) which details a ritual called “Spell to transform into an Akh”. In this ritual four priests are each to present a tkꜣ (made of red linen coated in high quality oil) to the deceased. The tkꜣ are then doused in milk and the ritual words are spoken. The text itself is very dense and jargon-y, so in order to figure out what’s going on Strong has turned to other evidence including contextual clues within the text.

When was this ritual done? The texts for the Opening of the Mouth ceremony say that is done with the mummy set up in full sunlight, but the Akh ritual talks about the onset of night and the presence of Osiris the god (rather than the deceased as associated with Osiris). So this implies a ritual done at sunset as a point of transition – which fits with “illuminating the path”. Also scenes in tombs where light offerings are presented to Osiris are all in the west of the tombs – which fits with sunset. Another important question is what is an Akh? It’s a form of the deceased that is associated with light and illumination. Traditionally Egyptologists have assumed it was associated with the sun, but Strong disagrees. As well as the evidence of the text, any time the deceased is depicted becoming the Akh there is artificial light present in the scene.

Strong also did an experiment to see how the pigments used on coffins look when you have the light sources available to the Ancient Egyptians. She took four boards and painted them with the yellowy pigments that we know the Egyptians used – including orpiniol & yellow ochre, and with different varnishes. Then she put the boards up in the garden at the Fitzwilliam Museum with wick on a stick lamps in front of them, and both videoed them & asked people to record their changing perceptions of the boards as the sun set and the artificial light took over from natural light. Varnished yellow ochre in particular undergoes a transformation – it looks like gold under the artificial light, having looked like mud in sunlight. The flickering of the lights enhances the effect.

So taking all the evidence together Strong’s suggestion is that the ritual for turning into an Akh provides the mourners with a representation of the event taking place. As the ritual takes place the sun sets & the coffin becomes illuminated only with the flickering light of the tkꜣ and so it comes to life, transforming from the mundane reality of a painted coffin to a golden being.

I found this a really interesting talk. It’s easy to forget when you look at objects in museums that the fluorescent light we see them under is far from their original context. It was also another great example of how you can take several obscure & insufficient sources of evidence and build up from them a plausible picture of customs of Ancient Egypt – the other recent example I’m thinking of is the talk we had from Alexandre Loktionov, another Cambridge PhD student, about Ancient Egyptian Justice.