In November a group of us from the Essex Egyptology Group had the chance to visit parts of the British Museum that aren’t generally open to the public – some of the storerooms where the 95% of the Egyptian artifacts that aren’t on display are held. I’d been on one of these trips before several years ago, so was pleased at the chance to go again – partly because it’s a chance to see items you don’t normally see, and partly because it would be someone different showing us round so we would see different things. When we’d all arrived we were split into two groups, the one I was in was shown round by Adrienn Almásy.

Almásy took us to the Papyrus room first – this is her speciality, she works on Demotic and Coptic texts. There are around 3,300 papyri that belong the museum – some of which are fakes. She showed us a few of these, mostly pieces of linen wrapped round sticks to fool 19th Century tourists. The real papyri mostly arrive at the museum as a collection of fragments which are then carefully pieced back together and mounted in glass frames. The collection is currently being scanned so that the texts can go online and be available to more people. The texts that the British Museum has are in Hieratic (a script used in parallel with hieroglyphs), Demotic (a later script that took over from Hieratic as the script of bureaucracy) and Coptic (a Greek derived script which took over from Demotic). The museum holds no Greek texts – these went to the British Library when the two collections were split. Which tells you something about the way the Egyptian texts were regarded – Greek = literature, but an Egyptian script = archaeology regardless of age or literary merit!

We looked at a few examples of texts, with a bias towards the later period as that’s Almásy’s speciality. One was a text that’s in Egyptian and written with Greek letters, that predates the development of the Coptic script, which was pretty cool. Another text was one that she’s working on to publish – on one side it has a letter in Coptic, on the other side is a completely unrelated text in Arabic showing that the papyrus was reused long after the first letter was sent. She also talked a bit about the status of Greek & Egyptian as languages during the Ptolemaic era. The higher levels of bureaucrats spoke & wrote Greek, and the lower administration spoke Egyptian & wrote in Demotic script – and you can see on official documents that a Demotic document will be glossed in Greek to make sure the meaning is clear. Almásy said that in modern Egypt speaking French or English is a status symbol and so high society speaks in a mixture of English, French and Arabic when talking amongst themselves. She speculated that perhaps in the Ptolemaic period the elites amongst Egyptian society mixed Egyptian with Greek in a similar fashion.

The next room we went to see was the pottery room, and here one of Almásy’s colleagues (Valentina Gasperini) spoke to us briefly – she is a specialist in ceramics, and is working on those from the New Kingdom period at Amara West. The pottery room is laid out in chronological order starting with pre-dynastic Naqada III era pots, some of which are decorated with boats and other motifs that will become typical of later Egyptian art. Apart from a couple of exceptions the pots in this room are those that don’t have inscriptions, the ostraca etc are stored elsewhere (that we didn’t see). Someone (I forget who) asked about pottery techniques during Ancient Egyptian history and Gasperini told us that the pottery wheel dates back to at least the Old Kingdom. There are depictions in 4th Dynasty mastaba tombs of a type of wheel that she referred to as a “slow” wheel. But the kick wheel (which is more what we’d think of as a pottery wheel, I think) isn’t seen depicted until the Late Period during the time when the Persian Darius ruled Egypt.

We’d spent quite a lot of time in these first two rooms so we had to be rather more brisk through the next two. I also appear to’ve taken very few notes in the metal objects room, which was the next one we went to. A large amount of the stuff in there is jewellery and Almásy opened several drawers for us to have a look. There is little, if any, of the British Museum’s Egyptian jewellery that’s out on display as it doesn’t fit with the current concept for the galleries, so it was a real treat to see what they have. There were a lot of exquisite necklaces and beads, and in one of the drawers there was also a smallish (20cm) silver statue of Amun. This is one of J’s favourite artifacts so he was delighted to have the chance to see it in person!

The last of the rooms we visited was the organics storeroom. In here they keep a lot of smaller wooden pieces like scribal palettes and statuettes, but the most noticeable contents are the mummies and coffins. They store the mummies & coffins on racks organised in chronological order starting with some naturally mummified pre-dynastic bodies. Each mummy that has a coffin is kept near to it, so the entire assemblage is in one area. On the day we visited there was a coffin down on a table near the racks being studied.

And then all too soon we were finished with our tour – it had been an hour & a half, but I think you could spend days there and not see a significant fraction of the fascinating objects!

Before meeting up with the others at the British Museum J & I had visited the Sir John Soane Museum. This museum is an Enlightenment gentleman’s cabinet (house) of curiousities as he left it when he died (as stipulated in his will). We’d visited it once before and done the whole museum properly, but on this occasion we were there for the Ancient Egypt related temporary exhibition – Egypt Uncovered: Belzoni and the Tomb of Pharaoh Seti I (which is still running till 15 April 2018). One of the items in the museum’s permanent collection is the alabaster sarcophagus of Seti I, which was brought back to London by Belzoni 200 years ago. We began our visit with a look at that, down in the basement of the museum. The whole piece is covered in texts and imagery from the Book of Gates, which is an ancient Egyptian funerary text. The scene that particularly caught my eye was inside the coffin and from near the end of the text where the great snake Apophis is bound in fetters. There’s also a bit of near modern graffiti – Belzoni carved his name in the sarcophagus at the foot end near the lip of it. Which was standard practice at the time (for instance many of the fine statues in the Turin Museum have Salt’s name carved into them), but it still makes me wince. 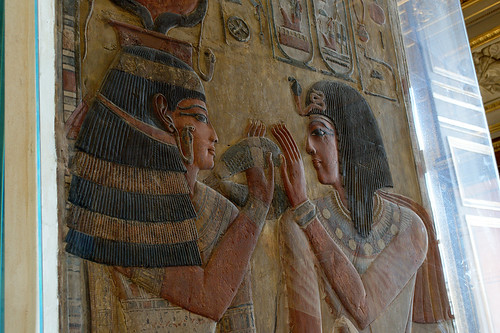 The temporary exhibition was quite small, just a couple of rooms. The first of these had an explanation of who the Great Belzoni was – circus strongman, engineer, adventurer and early archaeologist. He discovered the tomb of Seti I in 1817 – although it had been robbed in antiquity it was still exquisitely decorated and contained some small objects and the great sarcophagus. This room of the exhibition also included water-colours of the decoration done by Belzoni & his assistant (which in some places let us see detail that’s since been damaged in the original). It also included photos of pieces of the relief that were chiselled out and sent to European museums – one now in the Louvre (see my photo above which I took when I visited Paris in 2011), and a matching one now in Florence. Both show the goddess Hathor and Seti I. The second room of the exhibition had a few fragments of the lid of the sarcophagus (it was broken in antiquity, probably when the tomb was robbed) which are not usually on display so that was pretty cool to see. There was also a video of high-res imagery that’s been made of the sarcophagus. There is a plan to make a replica of Seti I’s tomb so that more people can see the beautiful reliefs without risking the original, and there will be a replica of the sarcophagus made to go with that.

It’s a pretty small exhibition, but worth popping into if you’re interested in Egypt – and the rest of the museum is also worth a look for the sheer over-the-topness of it all!