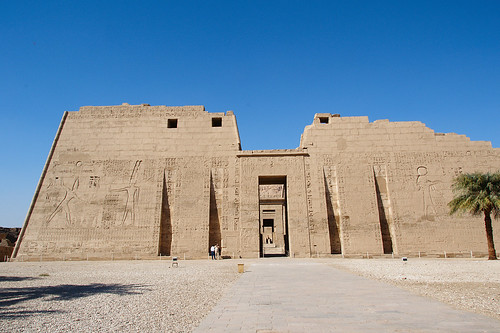 The last three days of the trip include two of the advertised highlights of the tour – the tomb of Seti I and the tomb of Nefertari. The photos for this overview series are up on flickr, in a set here, they are about half taken by me and half taken by J. Not all of the photos in the set are in these posts, so do go look at the rest 🙂 If you click on any photo it’ll go to its flickr page. Maps are linked to a custom Google map with all the places on, click on any map to go to it. Once there you can click on the place names in the key to the left to zoom to them or turn on & off the visibility of the layers to see particular days on their own. Hotels are green marks, sites are red. 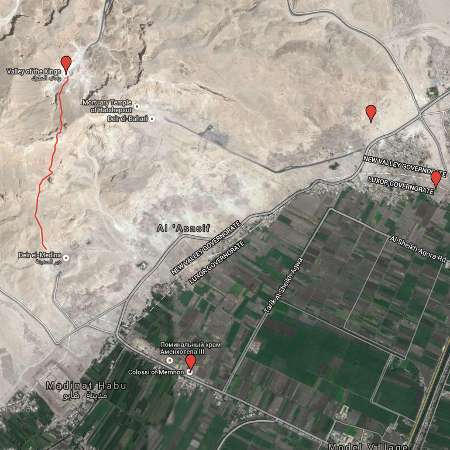 Another early start, this time we were in the Valley of the Kings by 6:30am having crossed the river on a motorboat and been taken by coach to the Valley itself. I was beginning to get if not comfortable with the boat trips, at least not as stressed out 😉 (I Don’t Do Boats, generally, unless they’re so big it’s not really a boat any more like a cruise boat.)

In the Valley of the Kings we were first let loose to explore three tombs ourselves, plus any of the extra ticket ones. J and I had a lot of choice for tombs we hadn’t seen before, only having been once before! We picked an 18th, 19th and 20th Dynasty tomb, to cover the range – which narrowed the choice down a bit out of the 9 available as only one 18th Dynasty tomb was open. So the ones we picked were Tutmosis IV, Tawosret & Sethnakte (buried in the same tomb) and Ramesses III. We’d also bought the extra ticket for the tomb of Ramesses V and VI (again, a two-in-one-tomb affair). It turned out we’d chosen our order well as this took us from least decorated to most impressive, each one more wonderful than the next. And then we got to go into Seti I’s tomb, which is generally closed to the public – and that was the crowning glory! It’s been damaged by flood water, but is still beautiful. 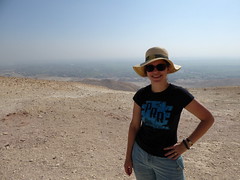 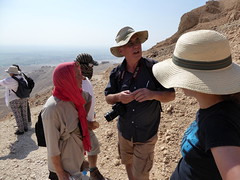 Walking Across the Mountain

The next bit of the day was walking from the Valley of the Kings to Deir el Medina over the mountain. Along the “easy” route, which also follows the probable path that the workers on the tombs would’ve commuted along. I had worried this might be a bit beyond me – I’m bad with heights and haven’t got the best balance in the world – but actually it was OK and I enjoyed it. I didn’t take any photos except a few on my phone, didn’t even take my camera, but J took several. 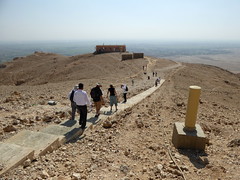 End of the Walk to Deir el Medina

We were met at Deir el Medina by the coach and the non-walkers, and were taken to the Moon Valley Restaurant for lunch and a well earned cold beer 😀 After this we were taken to the Colossi of Memnon, which I’m afraid I still find rather underwhelming. Next were more Nobles Tombs – this time of Roy, Shuroy and Amenemopet (who I kept jokingly refering to as Om-nom-nom-pet, but I think this internet reference was a bit too “young” for our companions to find as funny as I did 😛 ).

We finished the sightseeing portion of the day with another temple – this one the Mortuary Temple of Seti I (so a bit of a Seti themed day). This temple was similar in plan to the Ramesseum and Medinet Habu, and having been started by Seti I it had some very finely carved decoration (and being finished off by Ramesses II it had some less fine stuff too!). 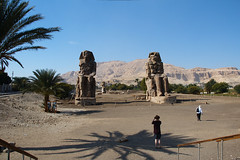 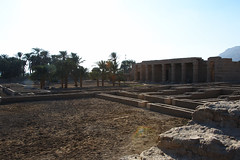 Colossi of Memnon (L) and Mortuary Temple of Seti I (R)

Once we got back to the hotel we had a bit of time to kill before it was dinner time, and so we went along with some of the others to a bookshop called Aboudi Bookstore. Despite spending a lot of time looking at all the books (mostly Egyptology books in the shop, of course) we didn’t actually buy any this time. We did buy a couple of prints of old photos of Egypt tho, and on the way back to the hotel we went into Gaddis (giftshop right next to the hotel entrance) and bought some old postcards (after a thorough look round the shop).

Dinner was in the Royal Bar again – this time with company: Dylan, Eileen, Margaret, Jan and John, if I remember correctly. And Dan and Tammy joined us later for a drink. Eating there twice in a row highlighted how limited their menu selection was, as we ended up repeating the club sandwich and having chicken skewers with it. 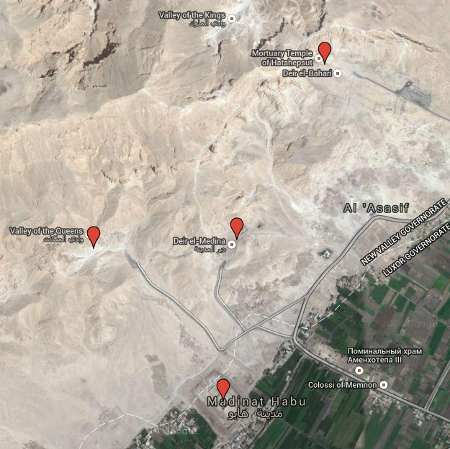 We had a later start this morning as we didn’t need to leave the hotel till 8am. It’s amazing how quickly we’d acclimatised, a 6am wake up time felt like a lie in!

The first site of the day was the Valley of the Queens, including the top-billed highlight of the tour: the tomb of Nefertari which is not generally open to the public. It was spectacular, the colours are still so vibrant and fresh looking – pictures in books really don’t do it justice. After that we visited another 3 tombs in the Valley, one for a wife of Ramesses III and two for sons of his. Whilst these were well decorated I felt they suffered a bit for us seeing them just after Nefertari’s tomb, I think if we’d done them the other way round I’d’ve been more impressed by them 🙂 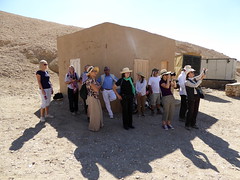 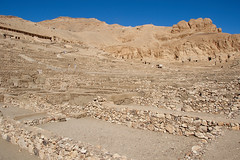 Next we went back to Deir el Medina for more of a look at it, concentrating on the tombs & temple. We started at the far end of it, with a look at the Ptolemaic era temple and the Great Pit behind it. The Great Pit was a lot bigger than I’d envisaged (it’s a failed well later used as rubbish dump, and contains a lot of pottery shards with writing on, the equivalent of post-it notes for the ancient villagers). We walked back through the village to the tombs of two of the craftsmen (Inerkha and Sennedjem), which are very well decorated as you’d expect given that they were made by the same people who also worked on the tombs of the Pharaohs over in the Valley of the Kings. There was also a bookshop here, set up outside the tombs, but we only bought some postcards. 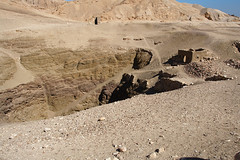 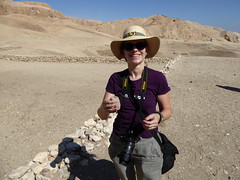 Our last site before lunch was Medinet Habu, which is the Mortuary Temple of Ramesses III. J and I had been here last time we went to Egypt, but I’d forgotten just how much colour is still left in parts of the temple. It’s really quite spectacular in places. 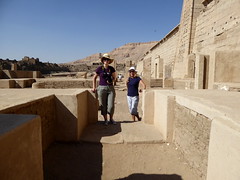 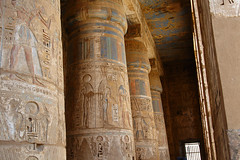 After lunch (at the Moon Valley Restaurant again) we visited Hatshepsut’s temple at Deir el Bahri – which felt pretty busy after having had most of the sites to ourselves (still just a fraction of the tourist numbers of 5 years ago though). J & I mostly looked at the first tier – at the Hathor temple, the Punt reliefs and the Anubis temple. 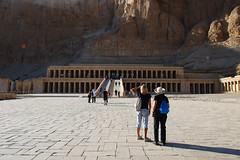 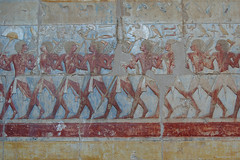 In the evening we headed back out to the Aboudi bookshop again, and actually bought something this time! We had dinner with some of the others in the hotel buffet (which was nice, but nothing special) before having a few drinks at the pool side bar. 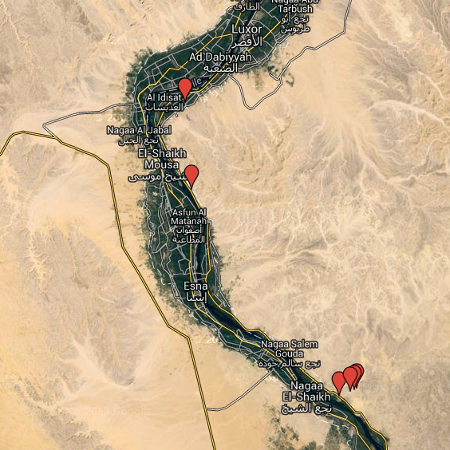 This was the last full day of the tour, and the sites we visited on it were an optional extra. Most of us had decided to do them, I think it was just Jan who had opted for a day by the pool to relax before returning home. It was another very early start, leaving the hotel at 6am again, to travel south this time. 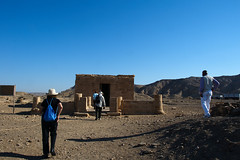 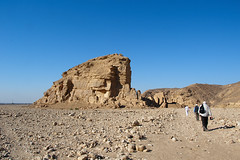 We started at el Kab, which had four different sites within it. First we went to a small temple from the reign of Amenhotep III. Next was Vulture Rock (which was my favourite of the sites we visited on this day) – it is a rocky outcrop by what was once an important trade route and a quarrying site, and it is covered in rock carvings with dates ranging from pre-Dynastic through to the 5th & 6th Dynasties. Everywhere you looked on the rock, and on another nearby rocky outcrop, there were carvings – some of them in proper raised relief, so not just someone’s doodles. After that we went to another temple – this one Ptolemaic – before looking at four 18th Dynasty nobles tombs, one of which has a text that gives a lot of information about the 17th Dynasty conquests (rather usefully for archaeologists!). 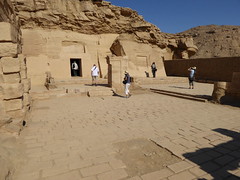 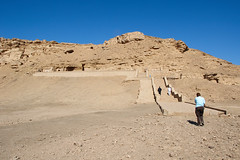 Next was another tomb – the tomb of Ankhtifi at Mo’alla. This dates back to the 1st Intermediate Period, and is the tomb of the governor of the local region who in the absence of a strong Pharaoh was practically a king in his own right. This site was also noteworthy for having half a dozen official looking chaps in leather jackets keeping an eye on the guardians while we were there – inside the tomb felt very crowded! 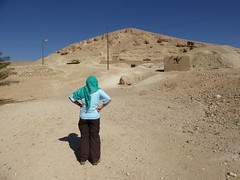 The Approach to Ankhtifi’s Tomb

On the journey from Mo’alla to el Tod we had our packed lunches and then we arrived at the final site of the holiday, which was rather sad. We visited the temple of Montu, which is right in the middle of a modern village but despite that it was very peaceful. Some of it dates from the Middle Kingdom, some of it was more recent from the New Kingdom and quite a lot of Ptolemaic era parts. 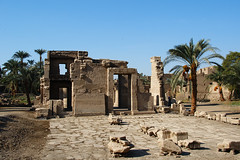 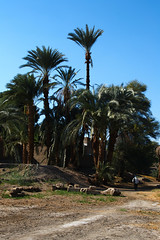 It was mid-afternoon when we got back to the hotel, so J & I thought we’d walk along to Luxor Museum to see if the gift shop there was still open (we knew the museum itself would be shut). Not our best decision, not only was the shop not open but also we got harassed by locals trying to get us to have taxi or caleche or boat rides all the way there and all the way back. So we got back to the hotel a trifle frazzled and decided instead of being virtuous and packing we’d sit by the pool with a beer first 🙂

In the evening Dylan gave us a talk about Nefertari and her tomb, and then most of us went across to the West Bank for a meal (organised by the other Margaret) as a sort of farewell do. Diane & Julian didn’t join us (as they’d already eaten before the talk), Kathrine & Michael had been unwell since the Karnak day (so were under doctor’s orders not to eat anything exciting) and we were likely to be too late back for Dan’s tastes, but everyone else came along. It was fun – good food & good company, but a bit sad as it was the end of the holiday. When we got back to the hotel we still weren’t virtuous about packing, and instead headed to the Royal Bar for a couple more beers with Dylan, Jan and Tammy. We finally packed sometime around midnight … 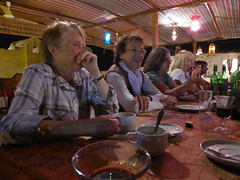 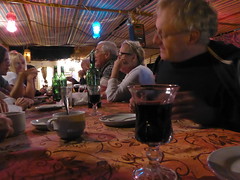 Dinner on the last evening

Our lack of virtuousness regarding packing came home to roost as we had to get up at 4am having had less than four hours sleep, but it was just a day of travelling so that wasn’t too bad. The flight was delayed a bit, but otherwise uneventful. We said our goodbyes to most of the people at the luggage carousel at Heathrow, then headed home.