Our very first trip of the holiday was to the Museum of Egyptian Antiquities in Cairo. There’s no photography allowed inside the museum, so I didn’t even take my big camera off the coach, but I did take a few photos outside the museum with my phone (up on flickr here). 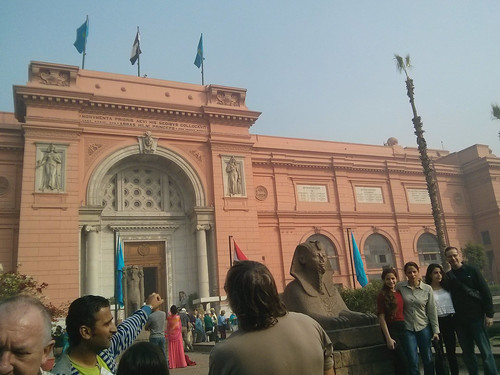 Once inside the museum the group split into those who wanted to have a tour from our guide, Medhat Saad, or those who wanted to just explore themselves. We opted for the tour to make sure we saw a decent overview of the interesting pieces, rather than just seeing things we already knew were there or wandering round randomly.

Medhat spent about two hours taking us around the ground floor in roughly chronological order. We started with the Narmer Palette, which seems appropriate as that’s from the start of Egypt as a unified country. Near the case with the palette are pre-Dynastic and prehistoric objects – we looked at some fragments of the Libyan Palette which possibly pre-dates the Narmer Palette (and is to do with payment of tribute to Egypt from some Libyan towns, hence the name). We also looked at a prehistoric flint sword, which was the biggest flint knife I’ve seen – I had no idea they were ever made at sword size. I’ve not made a note if it was thought to be ceremonial or functional, perhaps Medhat didn’t say. Despite being distracted by the prehistoric instrument of pointy death (I do like swords!) I also noticed the labels in the same case, with early examples of hieroglyphs on them.

We moved on from there to a statue of Djoser, who is a 3rd Dynasty Pharaoh. It has his name in a cartouche on the statue, and this is the era when the cartouche was just beginning to be used. Before the 3rd Dynasty you only ever see the Pharaoh’s name in a serekh – the palace facade with a falcon on top. Presumably this is when the Pharaoh’s official names start multiplying as I know they still have Horus names throughout the rest of Egyptian history, so it’s not a replacement of one form with another.

We jumped forward in time again for the next objects we looked at, which were some really lovely 6th Dynasty statues of servants from tombs at Meir. These statues look like they might be true representations of actual people rather than just idealised “male servant” or “female servant”. One of the statues is of a dwarf, another of a hunchback. My favourite of these was a messenger who was carrying a case of documents on his back with a (painted) leopard throw over it. In this area we also looked at some 5th Dynasty scribe statues, before moving on to the next room.

The next objects were a collection of triad statues of Menkaure which we had seen last time, and which J was particularly looking forward to seeing again. Menkaure was a 5th Dynasty Pharaoh – the builder of the last of the three big pyramids at Giza, grandson of Khufu. These statues each have Menkaure in the centre, flanked by two deities one of whom is a Nome deity (so a regional one). I think both J and I had remembered them as being larger than they are – but they’re only around a metre tall.

Another very fine piece we’d remembered from last time was the statue of Khafre (Khufu’s son, Menkaure’s father, builder of the second pyramid). This greywacke piece has a falcon (Horus) on the back of Khafre’s head protecting him. Medhat used this statue as a jumping off point to talk about how Ra (or Re) was now becoming more important and often a part of the Pharaoh’s name – before Khafre and Menkaure it’s not something that’s seen. In the same room as this piece were also the Meidum geese (a favourite of mine), the statue of the 4th Dynasty Prince Rahotep and his wife Nefret which is very fine, and also an unusual lifesize bronze statue of Pepi I (a 6th Dynasty Pharaoh).

We then moved on to see the grave goods of Hetepheres, which I’d wanted to see again. She was the mother of Khufu, wife of Sneferu, daughter of Huni. Her grave goods were found in a shaft on the Giza plateau near Khufu’s pyramid (not in her original tomb) and include her bed and other bits of her bedroom furniture, and a sedan chair. They were on Joann Fletcher’s recent programme about female Pharaohs (post) which had reminded me of them so I’d been looking forward to seeing the real things again.

The Old Kingdom section of Medhat’s tour was now over and we moved on to a few Middle Kingdom pieces starting with a statue of Montuhotep that I remember referring to as “old elephant legs” before – it has particularly large legs, perhaps for symbolic reasons. Also from this period we looked at a rather fine wooden statue of Senwosret I, and several seated statues of a Pharaoh (who I’ve noted down as possibly being Senwosret I but I’m not sure). These seated statues were most interesting for having an unusual unification symbol on the side of the throne – they have a rare depiction of Set as the representative god for Lower Egypt (with Horus as his Upper Egypt counterpart as is usual). Although there’s a later Egyptian (and modern) tendency to cast Set as “evil” or equivalent to the devil this isn’t the way that the Ancient Egyptians saw him. He was an important part of the balance of the world and a regional god for Lower Egypt.

Our last Middle Kingdom pieces were statues of Amenemhat as a sphinx – which had particularly lion-like human faces. And our first New Kingdom piece was a sphinx of Hatshepsut, as well as another statue of her. We then paused next to a rather fine white statuette of Tutmosis III for Medhat to explain the history that gets us from the Hyksos ruling Egypt (during the Second Intermediate Period) to Tutmosis III ruling over a unified and expanding Egyptian Empire. We stayed with Tutmosis III and Hatshepsut for a little while longer, looking at the originals of some of the reliefs on Hatshepsut’s Mortuary Temple at Deir el Bahri – these include some of the famous scenes of the expedition to Punt (there are replicas in situ at the temple). In the same room in the museum is also a chapel dedicated to Hathor by Tutmosis III which also comes from Deir el Bahri.

We then jumped forward a bit to the Amarna era. Medhat pointed out several interesting pieces including the coffin from KV55 which is thought to be Akhenaten’s. It was damaged when the tomb was flooded (in antiquity), and so fragments of the base of it have been painstakingly pieced back together on a plastic support. It has no name on it, those have been chiselled out and the assumption is that this was part of the supression of the Great Heresy of Akhenaten. Another thing in this room I was particularly struck by was the selection of painted floor fragments which give an impression of the opulence of the palaces at Amarna.

Medhat’s tour now skipped the rest of the New Kingdom going straight to a stela from the Late Period, showing the Nubian Pharaoh Piankhi with several of the self-styled Pharaohs of the Delta region bowing before him. After this we were shown a very fine fragment of a statue of Meritamun, and that was the end of the mostly chronological tour. Before he turned us loose to explore Medhat finished up by showing us a small exhibition of artifacts recovered by the museum after being removed in a variety of circumstances. Some were recovered from looters who stole things from the museum itself, some were recovered from items stolen from elsewhere in Egypt or dug up illegally & then sold on the international market. Some were recovered from international museums who’d acquired things in more dubious circumstances in the past than is permitted today. After we’d looked at that Medhat took us upstairs and gave us a sense of the layout of the 1st Floor before turning us loose to explore for ourselves.

We had about an hour to see some of the other exhibits in the museum, which wasn’t nearly long enough – but then we could’ve had a week and we still wouldn’t’ve seen everything there was to see! J had a selection of things he particularly wanted to see that we hadn’t seen yet, and I had a couple of things as well (one of which overlapped with his list). So we quite briskly trotted round the museum trying to balance wanting to see all the things with not spending too little time on the things we did see.

Our first port of call was the Royal Mummy rooms – last time we were in the museum we hadn’t realised there were two, so we only saw one. So this time we started with the one we’d seen before then moved on to the other one. The first room is dynasty 18 and 19 royals – of particular note given the later itinerary of the tour were Seti I and Ramesses II. The putative mummy of Hatshepsut is in this room as well. The other room has dynasty 20 royals, as well as high priests of Amun and their queens. Of note in here for the later itinerary was the mummy of Ramesses III. In the lobby area for this room there were also the two mummies of Tutankhamun’s parents, as identified by the Hawass paper from 2010. That’s the male skeleton from KV55 (which may or may not be Akhenaten) and the younger female mummy from KV35.

After the mummies we got a bit distracted by the royal coffins just outside the second room, but eventually tore ourselves away to head for the Tutankhamun galleries, where we saw the shrines and so on – and of course the mask, which must’ve had its bodged epoxy repair job by then, but we didn’t notice. After that we looked at the stuff from Tanis which was on J’s list of things to see: when we’d been in the museum last some of the objects were out on loan. Including the mask he particularly wanted to see, but this time it was there. This is the golden mask of Psusennes I, a 21st Dynasty Pharaoh – and J remembers seeing it at an exhibition in Edinburgh around 30 years ago. Another of the objects in this room was also particularly striking – the unusual hawk-headed silver coffin of Sheshonq II.

Next we walked fairly briskly past more of Tutankhamun’s grave goods on our way to see the items from Yuya and Thuya’s tomb. Including all of their coffins, and several rather beautiful pots and jars. We were moving fairly quickly by this stage as we were running out of time but we did manage to get in a quick look around the animal mummy room which was the other thing I’d particularly wanted to see. Mostly because I remembered the large crocodile mummy, with attendant baby crocodile mummies and wanted to see that again. They also had several cat mummies, as you would expect – including a sarcophagus for a prince’s pet cat! 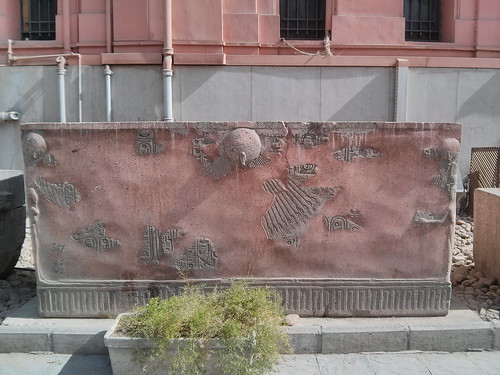 We’d very much run out of time by this stage, so we just glanced through doors at intriguing objects (like a room full of papyri!) as we made our way to the exit. It’s a bit sad that the gift shop and the coffee shop are shut up – it looks rather run down on the way out. Once back out in the open air we made our way past the fragments of Akhenaten’s outer granite sarcophagus (which is reminiscent in some ways of Tutankhamun’s equivalent one, unsurprisingly) and back to the bus.