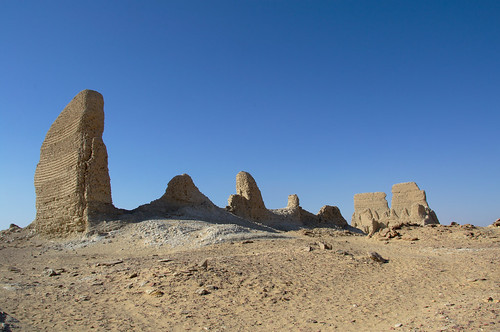 Dimai (or Dime es-Sabh) is the site of a Ptolemaic & Roman era town, on the northern shores of Lake Qahrun. Because the lake has shrunk since that time and the northern shore is no longer inhabited or cultivated the site is in a remarkably good state of preservation. It was inhabited for around 600 years from the 3rd Century BC in the reign of Ptolemy II through to its abandonment in the 3rd Century AD. My photos from this site and a few of J’s are up on flickr, click here to see the set. 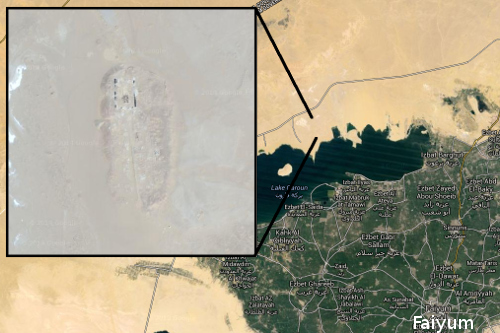 The most striking thing about the site as you arrive are the remains of the temple enclosure walls around the northern temple. These mudbrick structures are still very tall, much taller than head height, and they stand up out of the desert a bit like broken teeth. You can see them on the satellite imagery – the rectangle at the north of the town. When you look at them up close you see that the mudbricks aren’t in absolutely flat horizontal courses, instead there is a wave like effect. I assumed when I was there that they had just sagged over time, but I believe it was actually built like that – possibly for structural reasons, possibly for symbolic reasons (to do with the primeval waters and the temple as the primeval land). We couldn’t go in to see the remains of the temple as the archaeological expedition working there do not appreciate tourists! 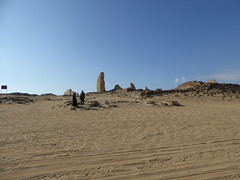 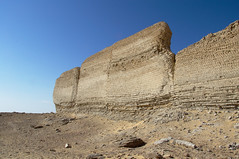 As you move through the site of the town towards the south there are clearly visible foundations of buildings, and some partially intact buildings. There is also a broad avenue bisecting it, running south from the temple (again visible on the satellite imagery). This is was a processional avenue – think Avenue of the Sphinxes in Luxor. And it’s from this that the modern name is taken – Dime es-Sabh means Dime of the Lions and it refers to the statues that once lined this avenue. The Greek name of the town had nothing to do with lions, it was Soknopaiou Nesos and means “the island of the god Sobek Lord of the Island”. And the article I got the Greek name from mentions that the Demotic one meant much the same. 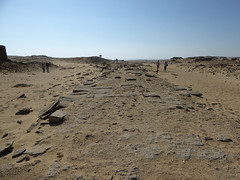 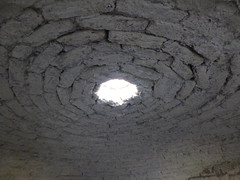 We were able to have a proper look at one of the more intact buildings – I think Medhat said that this had been a granary, and there was still a roof over what was left of this building. I didn’t actually go in, this was when I was feeling unwell, but J did and took some photos of it. The roof seems to be mudbrick arranged in a circular pattern with a central hole.

It was a bit of an eerie place – what had once been a busy town full of people and life, now just ruins in the middle of the desert with nothing but sand and rocks as far as the eye could see. 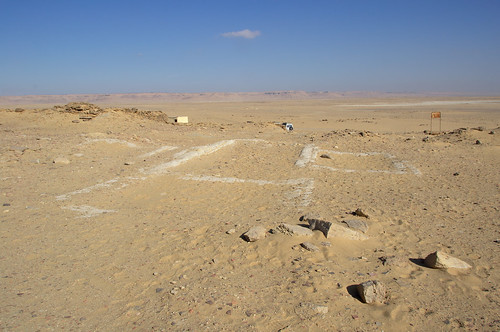