From Cairo to Constantinople: Early Photographs of the Middle East 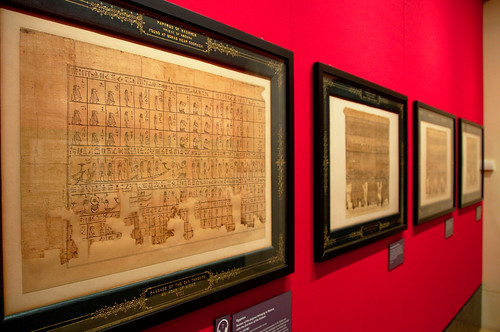 One of the Prince’s Souvenirs

In early February J and I visited the From Cairo to Constantinople: Early Photographs of the Middle East exhibition at the Queen’s Gallery, Buckingham Palace. My photographs are on flickr as always. This exhibition was a collection of photographs and objects related to Queen Victoria’s eldest son’s trip to the Middle East. The future King Edward VII was sent on this tour as a part of his education in 1862 when he was 20 years old – this was part of the “next step” in his education once his formal schoolroom education was finished. It was planned by Victoria and Albert in 1861, and despite Albert’s death only a few months before the departure date it went ahead as planned. The education remit of the trip extended past sightseeing and into diplomatic meetings – the Prince of Wales met the various local kings, leaders etc as he visited their countries. 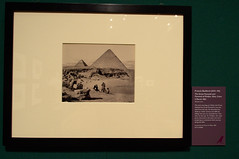 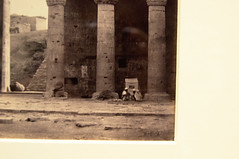 The first room of the exhibition started with a bit of scene setting (as in my first paragraph) and some information about the photographer, Francis Bedford. He’d made a name for himself as an architectural photographer before this trip and one of the little side rooms in the exhibition had memorabilia relating to his earlier career. This trip was the first time that an official photographer had accompanied a royal tour, and Francis Bedford’s photographs were hugely popular with the public after the Prince’s return. One of the striking things about these photos is how casual the building and landscape shots look, with the people in them appearing as if they were just there by chance. And yet given the camera technology of the day these must’ve been posed photographs otherwise the people would’ve moved during the several second exposure time. Bedford clearly had an eye for placement of people in the shot.

The rest of the first room was about the Prince’s travels around Egypt. He spent nearly a month in the country, travelling first up the Nile and then back down again. Along the way he visited many of the same historical sites that one visits today on a trip to Egypt – so it was cool to see photos of places we’d been to only a couple of months ago as they were 150 years ago. It’s easy to forget how much has been uncovered since then and how much reconstruction has gone on. The Prince also got to do things that are expressly forbidden these days – like climb to the top of the Great Pyramid at Giza to watch the sunrise!! Like all travellers he brought back souvenirs, and some of these were also on display. Of course if you’re royalty (and from the Victorian era) you get a different class of “tourist tat” … one of the Egyptian objects they had was a painted funerary stela which the Prince had had mounted in a gold Egyptian-esque frame. Quite tacky, as was the selection of jewellery he had made for his future wife from antiquities such as heart scarabs mounted in gold. He also brought back a section of a papyrus Book of the Amduat, which is rather more tastefully mounted and also quite a fine example (I have a fondness for the stickman style of Egyptian art on this sort of object so it’s the single thing I took most photos of in the exhibition). 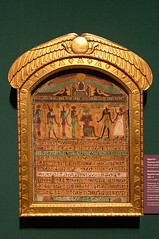 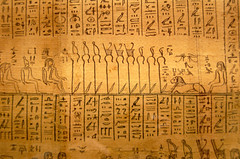 One of the side rooms also had a selection of items he’d “collected” (i.e. bought) in Rhodes. I liked they way they’d displayed Francis Bedford’s photo of the items above the items themselves and they also included some neat things. Although I didn’t get a good photograph of it that room also had an ancient and strangely beautiful grenade in it – a green glass globe, intended to be filled with napalm. 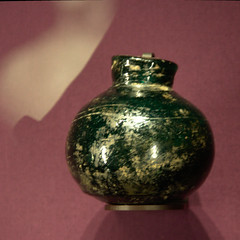 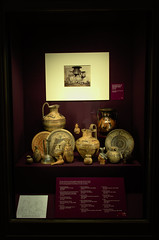 After he left Egypt the Prince travelled through the Holy Land and what was then part of the Ottoman Empire to Constantinople, and this was the subject of the photos displayed in the second main room of the exhibition. Given the era the Prince and his entourage were particularly interested in visiting places where biblical events had taken place, like the street in Damascus where Paul’s conversion to Christanity occurred or (more than one) place where the head of John the Baptist had been. They were also allowed to visit the Dome of the Rock, although Bedford didn’t get to photograph much of that. However, the photo that really stood out for me was of the Church of the Holy Sepulchre with the ladder that can’t be moved due to bickering between the various Christian groups using the church already standing in the place it can’t be moved from over 150 years ago. 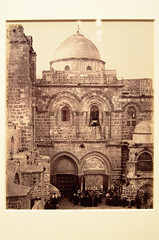 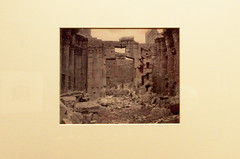 Church of the Holy Sepulchre (left) and “Temple of Jupiter” (right)

For the photos of the Prince’s travels through Syria and Lebanon the exhibition was keen to draw parallels with modern times. In Syria section in particular there were reminders of the current destruction of Damascus juxtaposed with the destruction that the Prince saw when he was there (due to fighting between Christians and Muslims in Syria in the 1850s). And the audio commentary for both the Syrian and Lebanese photos made good use of an interview with John McCarthy – mostly about the area in general in his role as journalist & expert, but also including references to his captivity in Lebanon.

The Prince finished his journey in Constantinople, the capital of the Ottoman Empire – which was Westward looking at the time, and keen to display its modernity and luxury to the royal visitor from England. Bedford’s photos of the city included several of the city skyline showing the age and size of the city. The Prince and his travelling companions went home from there via Rhodes (as I mentioned above) and various Greek islands including Kefalonia (which was ruled by Britain at the time, I’m not sure I knew that before).

It was an interesting exhibition, although more so in the Egyptian room for me because these were photos of places I’d also been so the comparison between then and now was more obvious.