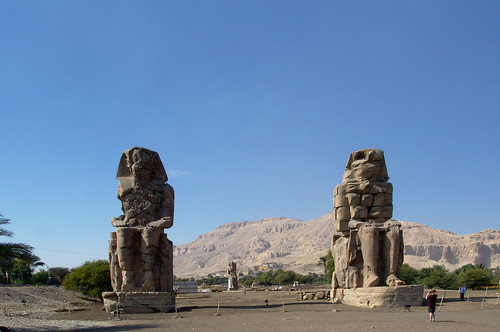 The Colossi of Memnon are, for me, the most underwhelming site we visited in Egypt. The only bits you get a proper look at on the site are the two statues in a rather sad state, but admittedly huge. The first time we visited there in 2009 the rest of the site didn’t impinge on my consciousness at all, and this time it was only visible in tantalising glimpses of other reconstructed colossal statues.

My photos from this site are on flickr here. 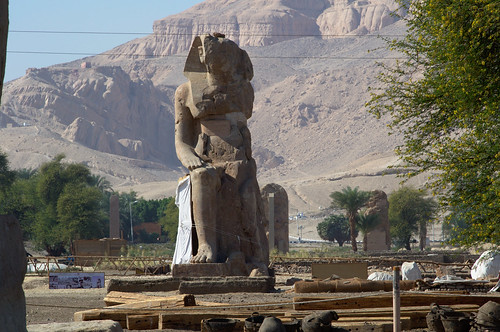 View between the Colossi to the rest of the site

This was once the vast mortuary temple of Amenhotep III, built mostly of mudbrick and within the area flooded by the annual inundation. Once his cult was abandoned and repair works ended the temple dissolved, and what stone there had been in the walls was taken by later Pharaohs to use in their own building works. Most of the statuary was left behind (although some was usurped by later Pharaohs), mostly toppled over or buried by the time Egyptologists were on the scene – except for the two Colossi. This temple, along with the Temple of Mut at Karnak, is one of the places that all the Sekhmet statues come from – there were once 730 Sekhmets in this temple, one standing and one seated for every day of the year. 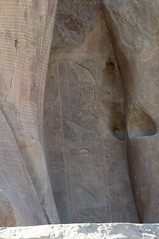 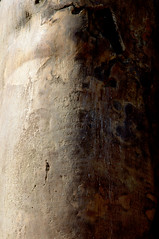 Graffiti (and an original inscription) on the Colossi

The two Colossi have been tourist attractions since antiquity. The one on the right used to sing at dawn – it had been cracked in an earthquake in 27BC and after that as the sun warmed the rock it would make an eerie crying noise. Hearing this was thought to bring good luck, so it attracted tourists – many of whom carved their names and messages into the Colossi. It stopped singing in 199AD when Septimus Severus had the statue restored and the cracks filled in. 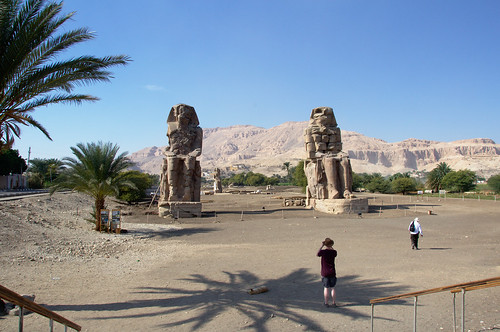