Mortuary Temple of Seti I

Seti I’s Mortuary Temple (called The Domain of Amen in the West of Thebes by the Egyptians) was the second of the 19th and 20th Dynasty mortuary temples that we visited – and seeing all three so close together (one a day) brought home the similarities in design that I otherwise wouldn’t’ve noticed.

My photos from this site are up on flickr, click here for the full set or on any picture (except the temple plan) for that photo’s page on flickr. 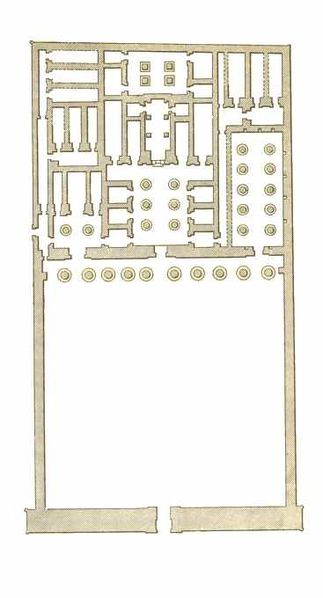 Partial Plan of Mortuary Temple of Seti I (from Wikimedia, uploaded by Zanaq).

The plan above was the best (public domain) plan I could find for the temple – but it’s only a partial plan. North is to the top right corner of the image. To the south east (bottom of the image) the plan is truncated at the Second Pylon, the remains of the First Pylon are a few tens of metres in front of that. The plan also doesn’t show the storerooms to the north east of the temple, nor the enclosure wall around the whole thing. 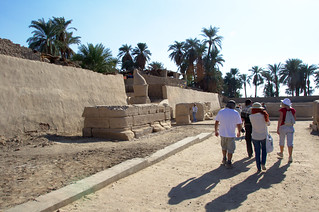 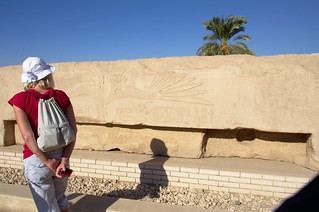 We came into the temple from the eastern corner, rather than through the remains of the First Pylon – this was because the village around the temple is so close that there are houses up against the pylon. There’s also not very much left of it and what there is is pretty damaged. After a look at that we walked across the courtyard towards the Second Pylon past large stone blocks that have been excavated but not restored to their original places (which is probably not even possible without building rather a lot of support). It always amuses me when they’ve been sat upside down – it wouldn’t be trivial to turn these pieces over and you can just imagine the supervisor of the job standing there and thinking “well, it’s done now, going to have to leave it like that”. 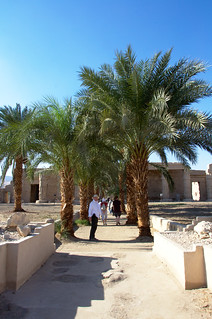 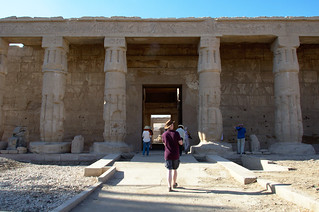 The path from the Second Pylon to the Portico (the row of pillars halfway up the above plan) is lined with palm trees which makes it look very peaceful. The Portico itself reminded me a bit of the Portico at Seti’s temple at Abydos (post) – the columns are a different shape, but there was still something about the style that was reminiscent to me. From the Portico back there is more of the temple still standing, and there’s even some colour remaining on some of the reliefs. 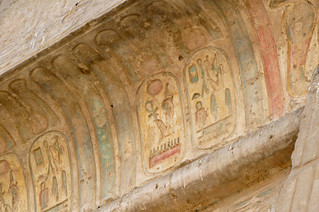 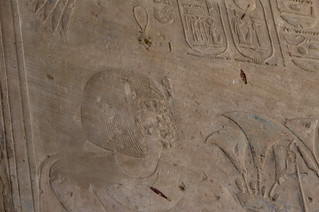 Decoration on the Temple

The temple was begun by Seti I, and as with so many of his building projects it was finished off by Ramesses II – which gave us another opportunity to compare and contrast the art styles of the two eras. This temple also had three chapels within it dedicated to Ramesses I. This was done by Seti I as an act of filial piety, because Ramesses I had no memorial temple of his own (having not reigned for long enough to build one). 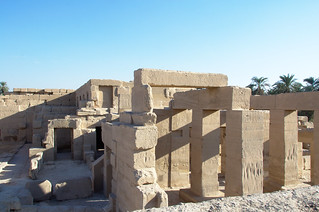 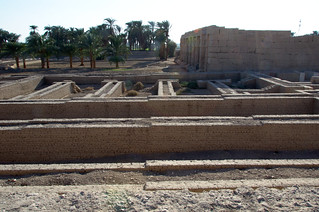 View from the Enclosure Wall

Once we’d had a look around the inside of the temple we walked back to the coach via the enclosure wall. The curators of this site have constructed a path running along the top of the wall starting in the middle of the north west wall and running down to the south west corner. Getting to see the temple and it’s surrounding building from this was pretty cool, it gave me a better feel for how the storerooms and the temple were laid out – and a chance to take some photos from a different angle. 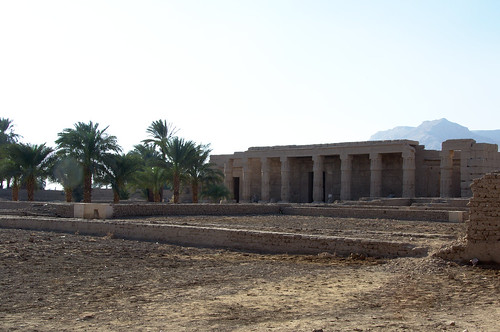