Egypt Holiday 2014: Valley of the Queens

The top billed trip out of the whole of our Egypt holiday’s itinerary was the visit to Nefertari’s tomb in the Valley of the Queens. As with Seti I’s tomb in the Valley of the Kings (post) this tomb is not generally open to the public. Although clearly they do open it often enough to make it worth their while designing and printing tickets for it! I don’t think I’ve mentioned the tickets for sites in Egypt in my blog posts yet – they’re generally rather well done and souvenirs in their own right, and the Nefertari tomb one was no exception.

Originally we weren’t visiting any of the other tombs in the Valley, but at the last minute Medhat changed some things around on the itinerary so that we could. Which was cool, because I’d not had the chance to see them before. As with the Valley of the Kings we had a ticket that let us into any three open tombs – but that didn’t actually give us any choices, there were only three open ones so that was what we visited. Another similarity with the Kings’ Valley was that photography was strictly forbidden – so no photos of the tombs. So I’ve picked out some Nefertari related ones from my Turin Egyptian Museum photos to illustrate this post.

The Tomb of Nefertari (QV66) 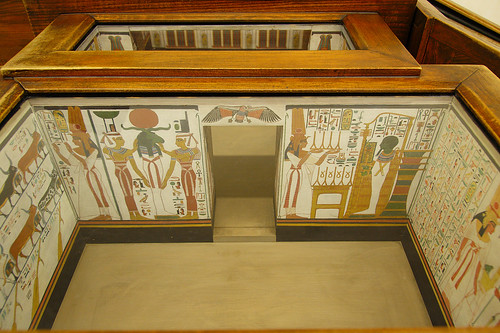 Nefertari was the Great Royal Wife (i.e. senior wife) of Ramesses II, and her tomb was discovered in 1904 by Schiaparelli (of the Turin Egyptian Museum). It had been robbed in antiquity, and so there weren’t many artifacts there for Schiaparelli to excavate. The decoration, however, was still in pretty good nick and is stunningly beautiful. The tomb used to be open to the general public, but the humidity caused by people breathing was found to be damaging the plaster that the decoration is painted onto. To stop this deterioration of the tomb it is kept in a protective atmosphere which must be replaced by pumping air in before the doors are opened. Visitor numbers are restricted with only a few small groups of tourists per year are allowed in for 10 minutes at a time.

It’s hard to know quite how to describe the tomb. Photos I’d seen in books beforehand really don’t do justice to the reality of the place and certainly the wee model we’d seen in the Turin Egyptian Museum (above) didn’t! The colours are still very vibrant and although it’s damaged in places the effect when you’re actually there is that it’s exactly as it was when the painters finished work. One thing I particularly looked at in the decoration was all the differences in the various representations of Nefertari. She’s got different outfits on, and different earrings and other jewellery. Another bit that caught my eye was that the staircases not only had snakes with wings, but also a pair of rather fine Anubises sitting on shrines. 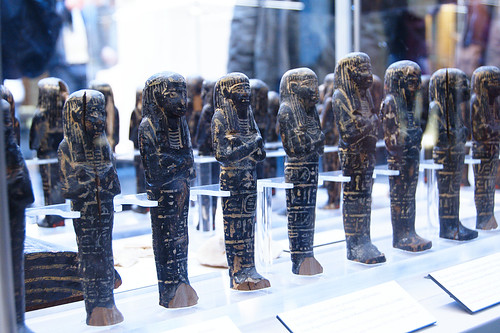 On the last evening of our holiday Dylan gave us a talk about Nefertari and her tomb to complement this visit. I didn’t take notes at the time, so can’t go into much detail but I do remember the gist of it (hopefully accurately enough!). He started by talking about the Valley of the Queens in general, and the discoveries of the tombs there including Nefertari’s tomb. The second half of his talk was about what’s known about Nefertari the woman – in brief, not a lot but some inferences can be drawn from the evidence we do have. She’s often presented as the love of Ramesses II’s life, with people citing the temple at Abu Simbel and the tomb as evidence for true love. Dylan thinks it’s more likely to’ve been a political match, and that her connections were an important part of what made her a favourite. The other senior wife is not as favoured, but there is some degree of positioning her as Nefertari’s equal. For instance in the reliefs where you see the long line of Ramesses II’s sons processing somewhere they alternate sons of each mother, one Nefertari’s son, one the other senior wife and so on. It seems implausible that the two women’s pregnancies were that well co-ordinated, instead it’s likely to be intended to convey their respective status. As I said, most of the tomb contents had been looted before Schiaperelli discovered Nefertari’s tomb, but some pieces were overlooked. Some of these (like the blue button in the picture below) have Ay’s name on them – the Pharaoh who succeeded Tutankhamun. Dylan talked about how there are similarities in the names of Ay, Tuya, Yuya, Nefertiti, Nefertari and others. His theory is that Nefertari is a part of a family that’s been very important in the military for generations, and has provided many consorts to Pharaohs (and even the occasional Pharaoh). And that her political importance is to do with linking Ramesses II and the still relatively new 19th Dynasty (at the time of his marriage) to this family. 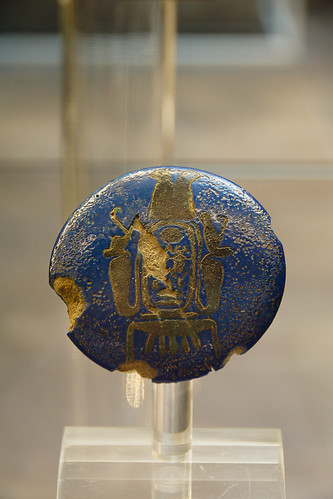 Faience Pommel with Cartouche of Ay

After visiting Nefertari’s tomb we moved on to look at the other three tombs that were open in the Valley. Doing them in this order meant that we didn’t appreciate these other three as much as we might’ve if we hadn’t just seen the best tomb! The three are all linked to Ramesses III – two sons and a wife. The princes were both named after sons of Ramesses II which makes it a bit confusing – the elder one was Khaemwaset (buried in QV44) and his younger half-brother was Amunherkhepshef (QV55). The queen was Tyti, and her tomb (QV52) is a neighbour of Khaemwaset’s tomb – perhaps suggesting she was his mother.

Both sons appear to’ve died young, and the decoration features Ramesses III introducing the boy to the various gods rather than the tomb occupant meeting them on his own as one would normally expect. In Khaemwaset’s tomb I was mostly looking at the various demons with their knives. In Amunherkhepshef’s tomb I was a bit distracted from the artwork by the bonus mummified fetus in a case in one of the rooms! This mummy wasn’t found in the tomb, and as far as I know has nothing to with Ramesses III’s family – it’s just displayed here for lack of a better idea of what to do with it. Tyti’s tomb decoration is in a poorer state than the other two tombs. However there were still some interesting things to look at – like a rather fine set of the four sons of Horus in one of the side chambers.